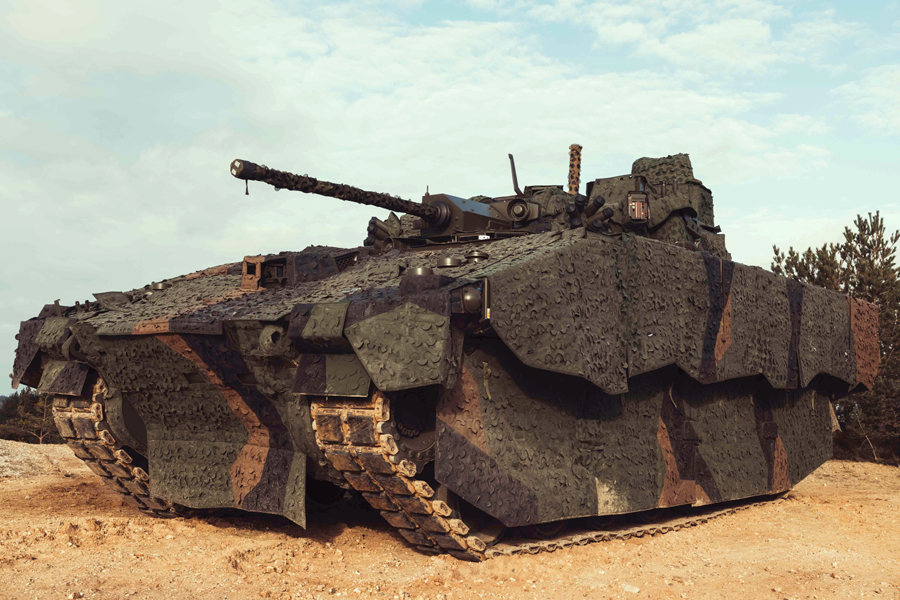 The UK MoD currently appears to have a policy in place which excludes independent specialist defence journalists and photographers from most media facilities*, preferring instead to use its own in-house assets to circulate information, and therefore keeping our readership abreast of what is actually happening with UK armed forces equipment in not easy.

The photos on this page, taken by a Royal Logistic Corps photographer during the Project HERMOD IR rehearsal which we are now told took place over the week of 15-19 March, include the first official images of the AJAX family of tracked armoured vehicles to surface for quite some time but unfortunately only single aspect photos of two vehicles on display have been released so far. Front and right side images of a BOXER, from its camouflage scheme and markings apparently a borrowed Bundeswehr example with an RBSL sticker on the side, were also released along with two images of an MBDA Land Ceptor launcher (possibly the trials unit we photographed at MSPO in Poland last September).

The official image long captions state: “It [the Project HERMOD IR rehearsal] included members of the Spec Inf [Specialised Infantry] Brigade, and a variety of new vehicles such as the AJAX and BOXER. This was all in preparation for a demonstration of the British Army Capabilities. The rehearsal took place on the training area at Bovington Camp.”

The BOXER long captions state: “The BOXER can be deployed around the world to deliver soldiers around the battlefield, travelling long distances quickly, cross country, under enemy fire and in the most austere of environments. It is modular by design, meaning that the same vehicle base platform can be quickly reconfigured with different modules to fill different roles. Initially the Army will buy a troop-carrying variant, an ambulance, a command vehicle and a specialist carrier.”

The AJAX and ARES long captions state: “AJAX family of armoured vehicles, will replace the Army’s Combat Vehicle Reconnaissance (Tracked) (CVR(T)) vehicles which have been the mainstay of armoured reconnaissance for almost fifty years. The AJAX family consists of ARES a troop-carrying reconnaissance vehicle, AJAX armed with a formidable 40mm cannon, support variants APOLLO and ATLAS, a command and control variant ATHENA, and an engineer variant – ARGUS.”

* We are often asked why this UK-based website devotes so little space to covering UK Armed Forces and their equipment. The primary reasons for this are the lack of opportunities provided by the UK MoD for independent defence journalist access to units and exercises and its policy of prohibiting use of images taken by service photographers to illustrate features and stories which are not deemed by MoD as being ‘current news’.

Curious Fact: Some fans of science fiction will realise that the original Project HERMOD was a pre-WWII institute created to protect Germany from extraterrestrial invaders.