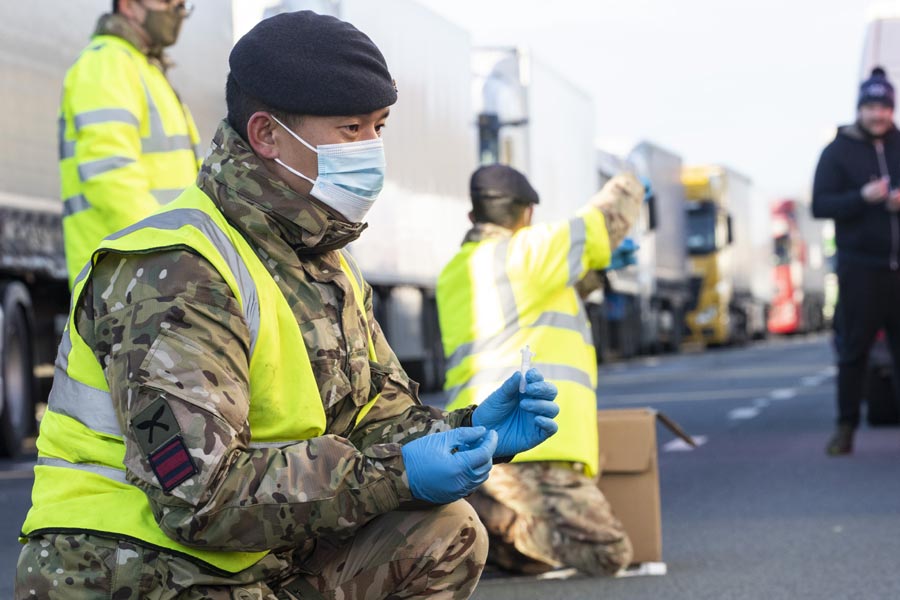 Press Release, Whitehall, 25 December 2020: Hundreds more members of the Armed Forces have been deployed to boost testing efforts in Kent to help get hauliers across the Channel to France. They will be drawn from the UK’s very high readiness Standby Battalions and join the 300 already assigned to this task.

While significant progress has been made, with hundreds of vehicles having already departed the UK, there is a requirement for an increase in testing as more vehicles continue to arrive every hour. Lateral Flow Devices are being used to test hauliers that provide results within the hour and provide the necessary negative test result to allow them to continue on their journey into France. The Armed Forces are experienced in using these devices having used them for mass testing in Liverpool, Merthyr Tydfil and Medway.

As well as delivering testing, soldiers will also be supporting welfare efforts, ensuring lorry drivers and other travellers are as comfortable and safe as possible during this challenging period. They have begun to deliver food parcels and water to those who are in their vehicles as well as providing logistics support to the wider operation of welfare support.

Over 10,000 tests have been carried out since Wednesday of which over 6,200 were carried out by the military, and now more than 4,500 trucks have crossed the Channel as of Friday afternoon. Advice remains for hauliers and other passengers to avoid travel to Kent until further notice as we work to alleviate congestion at ports.

James Heappey Minister for the Armed Forces said: “Hundreds more soldiers have been deployed to Kent on Christmas Day to help clear the backlog of hauliers waiting to cross the Channel. Their selfless commitment to our nation – foregoing Christmas with their families – is awe-inspiring and we are enormously grateful to them all.

“I have every confidence that their hard work and operational expertise working alongside our outstanding colleagues in NHS Test and Trace and Kent Police will see cross-Channel traffic quickly recover from the unprecedented closure of the border earlier in the week.”

On Christmas Day military personnel have been deployed to support the government’s response to COVID-19, with thousands held at readiness to support other government departments and civil authorities as required. They join the 6,400 sailors, marines, soldiers, airmen and airwomen deployed on overseas operations, working around the globe to keep the UK safe.

Transport Secretary Grant Shapps said: “The British Army is again showing why it is world class, ramping up testing and feeding hauliers stranded by the COVID restrictions, while helping oversee the operation in Kent. But let’s not forget the tireless effort of the police, civilians testers, council planners and port and ferry workers.

“These thousands of people, military and civilians, have given up their Christmas to help drivers separated from their loved ones through no fault of their own.

“They have created a mass testing and logistics system in days from a standing start after a ban on cross-Channel traffic was imposed with no warning. They are a credit to our country and we owe them our gratitude as we enjoy this day.”