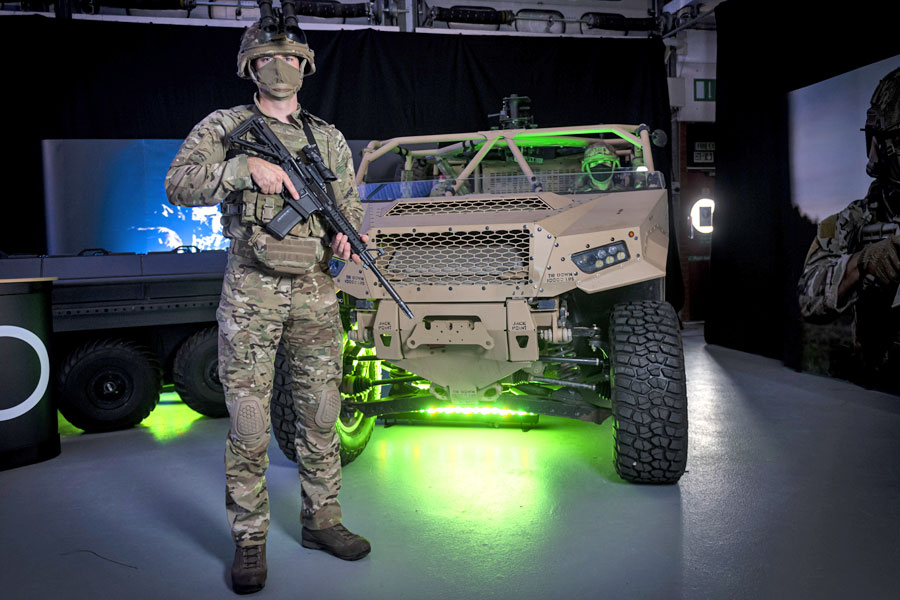 The UK Chief of the General Staff (CGS) has visited 77th Brigade and set out how the Army believes it is prepared for future challenges.

MoD News Release, 29 September 2020: Today at Denison Barracks in Hermitage, Berkshire, General Sir Mark Carleton-Smith, The Chief of the General Staff, set out how the Army is prepared for the challenges of the future, including strategic view on threats, great power competition and revolutionary tech.

The event showcased capabilities from across 6th (United Kingdom) Division, focusing on both the physical and digital domains. Soldiers from the highly trained Specialised Infantry Group (Spec Inf) talked about nano drones like Black Hornet and mini unmanned aerial systems (MUAS) as well as robotic support to enable the resupply of troops in remote locations. The emphasis here was very much about small teams working together with partner forces and allies, around the globe in places like Afghanistan, Iraq and Somalia. Soldiers from 77 Brigade demonstrate their web ops and target audience analysis capabilities which are very similar to those used in cutting edge advertising agencies.

¤ Below is a transcript (verbatim) of the CGS Integrated Review Speech given at Hermitage on 29 September 2020, as requested by us this morning.

An Asymmetric Army for the Digital Age

Thank you for making the effort to come here during these difficult times, which are testing our nation in ways we could hardly have imagined a year ago and look to be something that will continue to challenge us well into 2021. And it is materially contributing to, and accelerating, a prevailing geo-strategic trend of fragmentation and sharpening the lines of resurgent Great Power competition, together compounding the challenges of the 21st Century, which we were only just beginning to grasp.

And in this more fragmented and competitive world, conflict is also evolving; from binary states of peace and war and industrial age power measured in production and mass, to warfare of the digital age; endlessly competitive, inherently complex, and always blurred – and with the maturing battlegrounds of cyber and space to compete in.

And in recognition of the pace of this change, which feels exponential, the Army must offer a solution that offers continuous innovation and evolution to stay relevant. So, it perhaps won’t come as a surprise to you that my vision for the Army is one of unrelenting transformation; of how we train, operate and fight. To build an Army that thinks sharper and moves faster, designed to exploit weakness and counter strength, and to do it all of the time. That is why I am referring to it as an ‘Asymmetric Army for the digital age’.

This Army must be able to challenge our adversaries operating in the grey zone between war and peace. For our aim should be to prevent a war as much as win one. We need forces to shine a light into the shadows.

But all the while we must also be ready to fight and win because a conventional ‘war’ in the future cannot be ruled out, and the ability to fight remains a fundamental and core capability – our primary responsibility to the nation. It is the capability to warfight which provides the credibility to underpin a form of flexible modern deterrence – ensuring resilience in defence and unpredictability in offence – and it is this capability that drives our competitors to operate in the shadows. Competitors operate below the threshold of war precisely because we maintain one.

So, this Army must provide a continuum of deterrence from soft to hard power, from discreet to overt capabilities, from cyber to armour – enabled by a ‘digital backbone’ and an integrated intelligence picture. An Army with the ability to anticipate, to assert, and to act – and at a speed of relevance to decision-makers and observers alike. This is how we win in the 21st century.

So within this Army will be new units and capabilities to challenge our adversaries who operate so freely on the seams and blurred boundaries of our security and legal frameworks, who respect neither borders nor the rules-based order. Our priorities will include growing our Special Operations and Intelligence capability to enhance one of our most valued and relevant strategic assets, to ensure we stay ahead of our adversaries, and succeed in missions along the entire spectrum of requirement.

We will further develop our expertise in orchestrating intelligence and counter-intelligence; information operations; and unconventional warfare. Mastering non-lethal effects and stabilisation to deliver soft power in hard places. These enhanced capabilities will ensure we have that asymmetric edge.

We will enhance our persistent presence around the world alongside the RAF, Navy, Government departments and private sector, to ensure greater anticipation and to move faster to achieve advantage. These will provide ‘lily pads’ to enable understanding, change narratives, provide reassurance to allies and deterrence for adversaries and to secure economic interests for the promotion of shared prosperity. in short, they will give the UK more strategic choice and influence.

And to do so our technology must also change: the current system for fielding new technologies is simply not good enough for the digital age – to retain the competitive advantage requires the ruthless pursuit of innovation and novel tech – fusing current operations and training with prototype technology. Military needs matched with civilian innovation.

We will create – and train against – a multi-domain ‘enemy’ force, to fight in all domains against our troops, and in doing so ensure that our training acts as a war laboratory. And through crucibles like the Army Research, Innovation and Experimentation Laboratory (ARIEL), and the Ground Manoeuvre Experimentation Team in 3XX, we will ensure constant innovation to keep our forces on the leading edge of the character of conflict.

We aim for Human-Machine teaming to become commonplace by 2025 and it is being continually developed through the Army Warfighting Experiment. As a sure sign of the progress we are making the first robotic vehicles will be in the hands of 2 PARA and School of Infantry this month.

In time, Armoured Fighting Vehicles will be command hubs – ‘motherships’ – commanding teams of robots and thereby generating a new form of combat mass. They will be supported by longer range and more powerful artillery than the Army have ever used, firing on targets identified by swarms of drones.

And this will not only be good for the Army and the wider integrated force but also for the UK; on top of the £15bn annual contribution to the British economy, the Army will incubate British innovation and British technology – something we know is world-leading.

And this Army will need people – for people aren’t in the Army, people are the Army – the men and women of our nation have always proved the difference in the contest of wills. And this Asymmetric Army will offer them their chance to show their mettle – genuinely global, at the cutting edge of technology and underpinned by world-beating leadership and culture. It is a heady offer for anyone who wishes to join, soldier or officer.

This new Army will be about the integration of ‘boots and bots’, of proxies and pixels, of the conventional and unconventional. An Army which is fit for the demands of the digital age: more lethal, more agile and more expeditionary, more of the time.

It is not for me to prejudge the results of the Integrated Review, announce specific details or argue for particular capabilities, but this is my vision for what operating in the land environment demands of our Army in the 2020s and what you are going to see today is at the forefront of what I’ve described.

The stands here represent part of our investment in a new way to navigate these challenges – I hope you enjoy them and get a better sense of what we mean by an asymmetric Army for the digital age.

Editor’s Comment: It would have been very interesting to have been invited to yesterday’s media event to hear for ourselves what the CGS had to say, and to maybe ask questions about, for example, why the SIG personnel were: wearing very expensive Crye Precision MultiCam uniform garments instead of the issue UK Multi-Terrain Pattern uniform; carrying what appeared to be L119A1 Colt Canada C8 rifles rather than the quite recently upgraded L85A3 assault rifle and; using the Polaris DAGOR rather than say the in-service Supacat JACKAL or Land Rover R-WMIK. However as the UK MoD no longer routinely invites specialist defence media to facilities, some say in case somebody questions if the emperor is really wearing new clothes and thereby gives the game away, and as these days allowing independent media coverage appears to have been ditched in favour of generating self-produced stories, aka propaganda, we are not really surprised to have been left out of the loop.