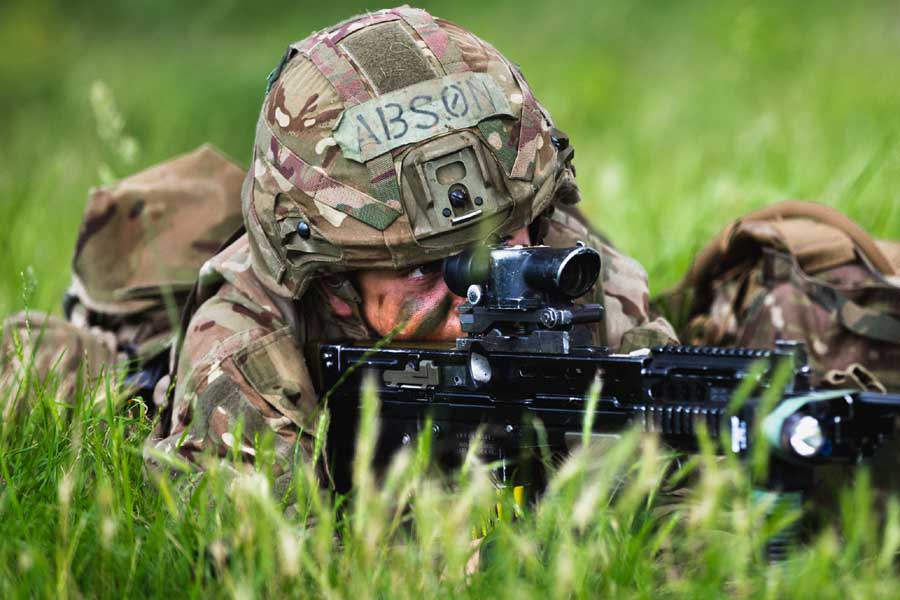 The first female RAF Regiment officers have successfully completed the required 25-week course and graduated at RAF Honington in Suffolk.

Flying Officer Emma Graves (22) of Verwood, Dorset, knew that a military career was for her and chose to earn her commission in the RAF undoubtedly due to the time she had spent as an Air Cadet. Emma said: “One of the biggest things I did, as a cadet, that led me to wanting to join the RAF Regiment was the Air Cadet Junior Leaders Course. It not only taught me about leadership, fieldcraft and military skills, but it also gave me the confidence in myself that I could achieve more than I thought I could.” Emma said the Junior Regiment Officers’ Course had been ‘tough, but thanks to the experience of the instructors and the great camaraderie of fellow course mates, it had on the whole been an enjoyable course’.

Flying Officer Juliette (Jules) Abson (26) of Hereford, has several family members that were in the military and she herself had always been interested in joining. She was advised to look at the RAF Regiment by a friend and following a visit over 2 years ago she decided it was the most interesting of the Armed Forces. Jules hopes to have a positive impact on other’s careers and looks forward to enjoying and partaking in some of the many sports that the RAF has to offer. To other women looking to join the RAF Regiment she said: “I would recommend they explore their interest and get on as many visit days or speak to as many people as possible.” She added: “If it is what you want, go for it and don’t let anyone’s opinions hold you back.”

Emma and Jules are 2 of 13 Junior Officers who are the latest cohort to have successfully completed their training to become RAF Regiment Officers.

Fellow graduate Flying Officer Jonathon Gould (25) from Milton Keynes said: “The course has been arduous, testing both our physical and mental robustness. However, Junior Regiment Officer’s Course develops the individual to succeed in these areas and command, setting you up for the future.’’ Jonathon will soon be presented with the Adrian Nicholas Award 2019 for his accomplishments at RAF College Cranwell in his Initial Officer Training.

Over the last 6 months, and with the additional challenges of maintaining safety under COVID-19, these men and women have overcome considerable physical and mental challenges under the close supervision of the professionally trained staff of Training Wing, RAF Honington. In doing so they have earned their place amongst the commissioned ranks of the very proud and distinguished Corps.

Reviewing Officer RAF Force Protection Force Commander, Commandant General Royal Air Force Regiment, Air Officer RAF Police, Air Commodore S M Miller MA RAF said: “The Junior RAF Regiment Officers’ Course is exceptionally challenging and its standards are unremitting. Those graduating today, including our first female officers, have demonstrated exceptional skill, fortitude and resilience, and I am proud to welcome them into our Corps. They have earned their right to wear the RAF Regiment ‘mudguard’ and to join our front-line. Here they will lead RAF Regiment gunners, exceptional men and women, on a vitally important mission to enable the RAF and its Air & Space Power in the face of adversity and threats. Demanding but hugely varied and rewarding careers await them.”

The Junior Regiment Officers’ Course consists of 3 modules: Basic Soldiering, Basic Command and Advanced Command. Recently commissioned RAF Officers are taught, developed and assessed in all the necessary skills and traits, from gunner to Flight Commander, within the Complex Air Ground Environment to enable them to successfully graduate into their first tour of duty.

Each graduate is now welcomed into the family that makes up the RAF Regiment that delivers global Force Protection for the Royal Air Force. They will now be posted to one of the RAF Regiments Field Squadrons whereby they will lead RAF Regiment gunners, exceptional men and women, on a vitally important mission to enable the RAF and its Air & Space Power in the face of adversity and threats.