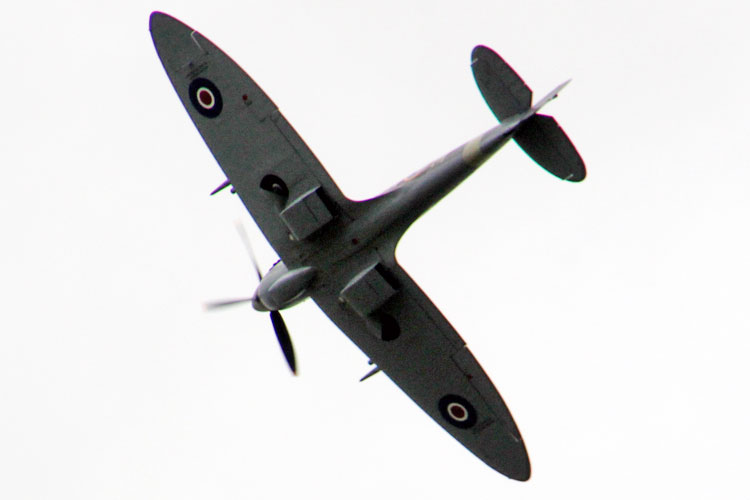 On 6th May personnel from all three Services came together on the White Cliffs of Dover to display their gratitude to the Second World War Generation.

UK MoD News Release, 07 May 2020: On the 6 May, ahead of national celebrations marking the 75th anniversary of Victory in Europe Day, personnel from all three Services came together on the White Cliffs of Dover in Kent, to display their gratitude to the Second World War Generation.

A Lone Piper, Pipe Major Andy Reid, from the 1st Battalion Scots Guards played ‘When the battle’s O’er’ whilst two Spitfires from the Royal Air Force Battle of Britain Memorial Flight performed a flypast overhead. HMS Severn, a Royal Navy Offshore Patrol Vessel, was positioned off the coast of Dover during the flypast.

Second World War veterans, and the public, will be able to watch the spectacular flypast of the two Spitfires on BBC One after the national two-minute silence at 11am on the 8 May.

The Spitfire aircraft, piloted by current serving RAF officers, were both operational during the Second World War. Spitfire Mk Vb AB910, flown by Flight Lieutenant Andy Preece, flew 143 operational missions in a remarkable wartime history that spanned almost 3 years from August 1941 to July 1944. The aircraft provided air support for the D-Day landings in June 1944 and is now painted in the colour scheme of a 64 Squadron Spitfire at the time of ‘D-Day,’ with full invasion stripes.

Spitfire Mk IIa P7350, flown by Squadron Leader Mark Discombe was built in 1940 and flew on operations from 1940 until 1942, it is the only remaining airworthy Spitfire that flew in the Battle of Britain. The aircraft was selected to fly in the WW2 movie ‘Battle of Britain’ (released in 1969) and is displayed in a scheme that reflects the Spitfires’ finest hour during the Battle of Britain.

Flight Lieutenant Andy Preece said: “It is the ultimate honour and privilege to be flying such an iconic aircraft to commemorate the 75th anniversary of VE Day. As a current serving RAF officer, I’m continually inspired by the service and bravery of those that served before me.”

Pipe Major Andy Reid, 1st Battalion Scots Guards said: “It’s crucial we and the whole nation remember, particularly at this time of crisis. I along with the other guys back in camo are on standby to deploy as part of the Military’s COVID Support Force, but on the day (VE75 Fri 8th May) if I’m not tasked, I’ll be playing outside the Battalion Headquarters back in Mons Barracks, Aldershot.

“Ordinarily we’d be moving into our busiest time of the ceremonial year with big events like the Trooping of the Colour, but of course this year it’s all had to be cancelled; probably the first time since the end of the second world war. I’ve only ever been to Dover before to catch ferries, so this is quite special. It’s great to be able to represent my regiment and play my part in the national commemoration of such an important event.”

Armed Forces personnel, both in the UK and deployed overseas will lead the nation this VE Day in saying thank you to Second World War veterans. Meanwhile, Royal Navy personnel from RFA Argus, currently deployed in the Caribbean, have shown their support by spelling out ‘75’ on the deck of the ship.

Footnote: The UK MoD publicity machine issued the above Release at 16:00 on 7th May, allowing us to schedule this post to meet the 8th May 00:01 embargo, but as they stated that images would not be released until after the embargo was lifted we had little option but to use a library image of a Spitfire in flight instead of photos of the actual flypast. Sorry.