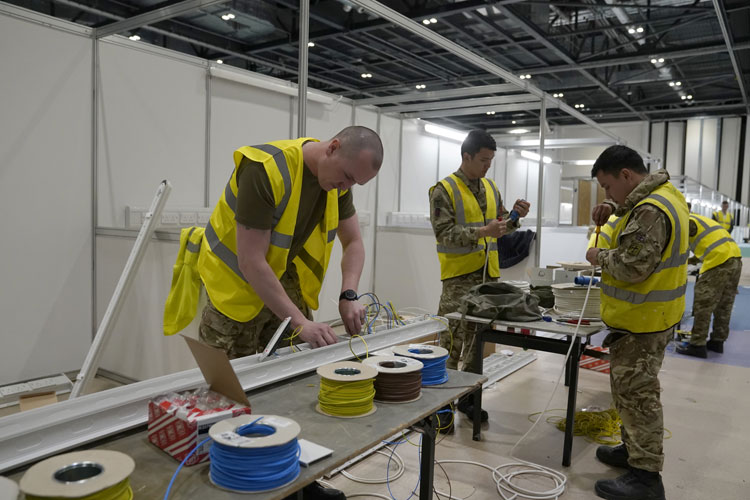 British Army personnel assigned to the UK COVID Support Force have been helping to build and equip the temporary NHS Nightingale Hospital in ExCel London.

Since the end of last week elements from both 1st Battalion of the Royal Anglian Regiment and the Queen’s Gurkha Engineer Regiment (part of 36 Engineer Regiment) have been working at London’s ExCel Centre in Docklands, a venue we associate with the biennial DSEI expo, to support the build of an NHS Nightingale Hospital. Being sensible chaps we have complied with the UK Government’s ‘Stay At Home’ request and have not visited ExCel but instead we are bringing you these officially released photographs, taken last Friday (27th) by MoD photographers, which were issued on Sunday (29th) without a formal MoD Press Release.

The UK MoD Directorate of Defence Communications is not noted for being proactive and indeed a few years back a previous Director expressed to myself and other specialist defence media, at a meeting in the MoD Whitehall Main Building, his frustrations when attempting to coax his department from being reactive to being more proactive. It is therefore no surprise to us that rather than producing regular Press / New Releases for the media the MoD is merely adding the odd update paragraphs to a guidance page on the COVID Support Force created on 23rd March, several days after the Defence Secretary announced it. Fortunately, the troops have more drive. Below is the section of this guidance page (as of the 30th March edit) which makes reference to NHS Nightingale at ExCel in London’s Docklands.

Temporary NHS Hospitals: NHS England is actively preparing for a number of scenarios as the Coronavirus outbreak unfolds and is working with clinicians and a small team of military planners to support local health services around the country.

The NHS will open a new hospital, NHS Nightingale, in East London w/c 30 March. The NHS and DHSC turned the Nightingale facility from a concept to a reality, with military personnel involved in the planning stages. Defence continues to support NHS England by providing infrastructure, logistics and project management advice and is working with them to understand where further facilities could be set up in other areas of the country.

Lt Gen Ty Urch said: “The expansion of the NHS Nightingale project to other parts of the country is an absolute necessity at this time. The UK Armed Forces will do whatever is required to support the Scottish Government and the Health Services across the United Kingdom during this crisis, and bring this vital capability to wherever it is needed in our combined effort against Coronavirus.”