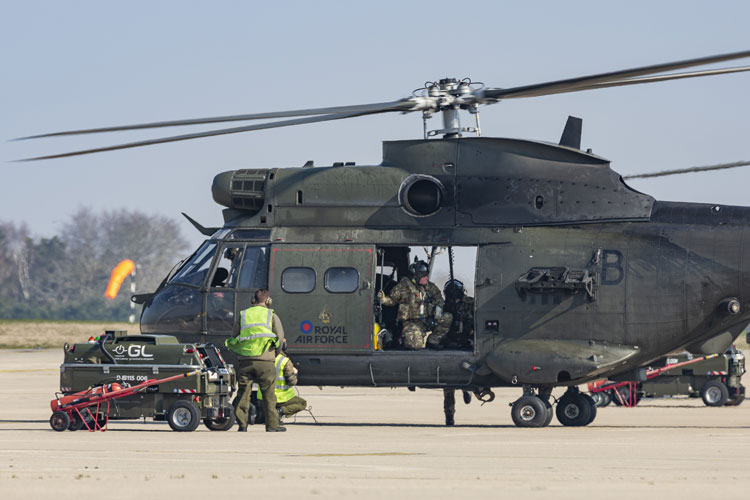 The military has stepped up its work in Scotland with RAF Puma helicopters deployed to Kinloss as part of the ongoing UK Government response to Coronavirus.

The Pumas will work closely with a Chinook and a Wildcat helicopter based at RAF Leeming, North Yorkshire, to meet any requests for assistance from NHS boards and trusts across Scotland and Northern England. A second helicopter facility will cover the Midlands and Southern England working out of The Aviation Task Force Headquarters at RAF Benson in Oxfordshire. Chinook and Wildcat helicopters normally based at RAF Odiham and RNAS Yeovilton respectively will support the Southern areas.

The helicopter facilities have been set up to support medical transports across Scotland and the rest of the UK. The new task force will also be available for general support such as moving equipment and personnel across the wider UK. All the helicopter forces will be supported by the Joint Helicopter Support Squadron, normally based at RAF Benson, as well as the Tactical Supply Wing, based at MoD Stafford. Personnel from all 3 services across the Joint Helicopter Command will be coming together to support the task force.

This new Kinloss-based support follows last weekend’s use of an RAF A400M transport aircraft, working with the Scottish Ambulance Service, to evacuate a critically ill patient from the Shetland Islands to Aberdeen to receive intensive care treatment.

The aviation support is in addition to a team of Army medical, logistics, supply and humanitarian relief planners who joined the Scottish Government’s Emergency Co-ordination Centre team in Edinburgh earlier this week. The team of military planners and liaison officers are now co-locating at St Andrew’s House in Edinburgh. This team will be supported by the Battalion Headquarters of Penicuik-based 2 SCOTS, The Royal Highland Fusiliers, 2nd Battalion, The Royal Regiment of Scotland. Additionally, a wider team of military liaison personnel will be made available to every health board in Scotland.

Defence Secretary Ben Wallace said: “The creation of these helicopter hubs is the next step in our Armed Forces’ contribution to tackling the Coronavirus outbreak whenever it appears throughout the United Kingdom. Our aircraft are ready to support emergency services and local communities wherever needed across the highlands and islands of Scotland – the Armed Forces have always got your back.

“In addition, our superb military planners and logisticians are engaging with the governments and health services of Scotland, Wales and Northern Ireland to support their efforts in responding to the virus.”

Lt Gen Tyrone Urch CBE, Standing Joint Commander said: “The addition of these two aviation task forces, one in Scotland the other in England, bring another vital capability to the UK’s combined effort against COVID-19.

“My team and I will ensure that they are on task 24/7 across the UK for as long as is necessary to support the Government and our NHS as they respond to this national crisis.”

Group Captain Adam Wardrope DFC, Aviation Task Force Commander said: “We are at high readiness to provide support to anywhere in the UK that needs it. We have operationally experienced crews who are on standby to assist with medical evacuations across the nation in response to COVID-19.

“We also have the capability to support the NHS with the distribution of critical equipment and personnel as needed.”

In addition to its close relationship with the Scottish Government’s Resilience Room, Defence provides a network of officers, usually commanders of local units, who engage with Local Resilience Partnerships in their own areas of Scotland.

Scottish Secretary Alister Jack said: “The UK’s Armed Forces are doing a fantastic job in supporting the country’s efforts to tackle Coronavirus. The UK Government is working closely with the Scottish Government on our response, and the MoD will be able to offer them much-needed specialist skills. We are very grateful for the commitment and dedication shown by all members of our armed forces at this challenging time.”

Deputy First Minister of Scotland John Swinney said: “Scotland’s public services and our NHS are working flat out to support the effort to tackle COVID-19. Our Scottish Government resilience operation has always had a strong working relationship with the Armed Forces, offering assistance during severe weather, and we welcome their support during these unprecedented and difficult times.”