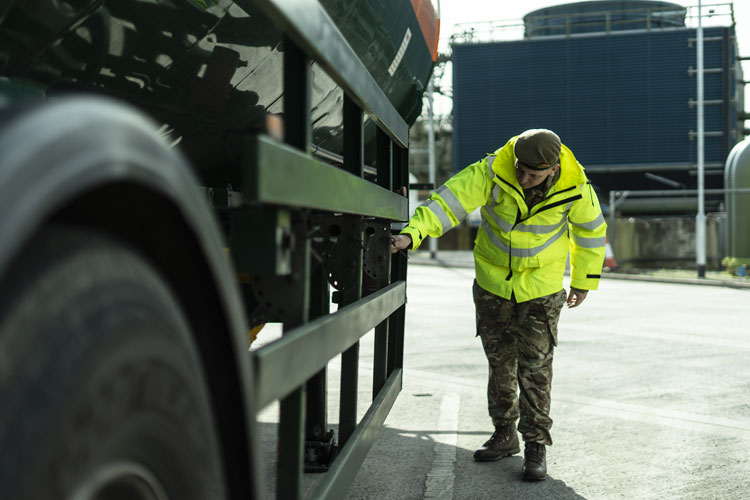 UK MoD News Release, 24 March 2020: Military personnel have begun their training to drive oxygen tankers in support of the NHS as part of the Armed Forces’ contribution to the Government’s coronavirus outbreak response. They will be able to deliver oxygen supplies to NHS facilities around the country if needed.

Training began on Monday 23 March at an Air Products facility in Carrington, near Manchester. Armed Forces personnel from all three services will work alongside the civilian experts who provide oxygen to the NHS on a daily basis. By the end of this week, a number of military personnel will have completed their training to fill the oxygen tankers, drive them safely and deposit the oxygen at NHS facilities.

Colour Sergeant Nick Barber, from 1st Battalion The Duke of Lancaster’s Regiment, British Army, was asked to attend the training due to his driving experience. He said: “Once our training is complete at the end of the week, we will be on standby to move forward and deliver the essential supplies should we need to.

“We will be trained, confident and ready to go.”

The Armed Forces are preparing to provide oxygen tanker drivers to support the NHS as part of the Military Aid to Civil Authorities (MACA) process. The training is part of prudent planning to ensure the NHS has the number of drivers it needs. Military personnel will be able to take control of the oxygen tankers and take the stock to where it’s required if asked.

Additionally: Soldiers from 4 Regiment, Royal Logistic Corps delivered 40,000 surgical masks to St Thomas Hospital in London this morning (24-03). The Personal Protective Equipment was collected from Haydock, near Mersyside last night and driven down to London. The rest of the equipment will be kept outside of London so it can be brought in as required.

NHS Nightingale Hospital: The NHS will next week open a new hospital providing support for hundreds rising to several thousand more patients with coronavirus, NHS England announced today. The NHS Nightingale Hospital, London, is expected to admit its first patients early next week. The hospital, based at the ExCeL conference centre in East London, will initially provide up to 500 beds equipped with ventilators and oxygen. The capacity will then scale over the coming weeks, potentially up to several thousand beds.

Defence Secretary Ben Wallace said: “Our military planners and engineers are working hand-in-hand with the NHS to support their development of the NHS Nightingale Hospital. The Armed Forces have already been distributing personal protective equipment to meet the increased demand and we stand ready to assist further in any capacity needed.

“The NHS and our Armed Forces are both world leaders in their fields, and this ambitious project is just one example of what can be achieved when they come together to help the nation.”