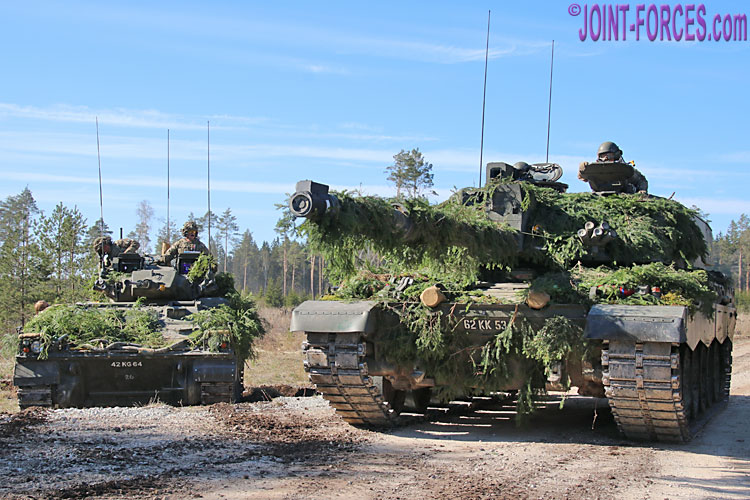 Overnight the UK Ministry of Defence announced that Prime Minister Boris Johnson will travel to Estonia to celebrate Christmas with British troops stationed there.

Tapa is home to 850 British troops from the Queen’s Royal Hussars who, alongside personnel from Estonia, France and Denmark, lead the NATO battlegroup. This is the UK’s largest operational deployment in Europe and forms part of NATO’s enhanced Forward Presence in countries such as Estonia, Latvia, Lithuania and Poland, to ensure the principle of collective defence can be upheld on the Alliance’s eastern border. The Prime Minister will meet troops from across the UK and tour the military base – including a hangar where he’ll see tanks and other vehicles. He’ll also have a bilateral with Estonian Prime Minister Jüri Ratas.

The defence and security of the UK is a top priority for the Prime Minister. The UK is the biggest defence spender in Europe and makes a leading contribution to the NATO Readiness Initiative. The Government is committed to continuing to spend at least 2% of GDP on defence, and next year we will spend an additional £1.9bn on the military budget. Military personnel and veterans are at the heart of the Government’s approach to defence. The Prime Minister has pledged to honour the Armed Forces Covenant, and earlier this year he created the Office for Veterans’ Affairs to offer comprehensive support to those who have given so much to their country.

Speaking ahead of the visit, the Prime Minister said: “The men and women of our Armed Forces serve tirelessly every single day to keep us all safe. While we enjoy Christmas with family and friends, they will be working hard across the world to defend Britain and our allies. And today in Estonia I will meet troops working on the front line to guarantee Britain’s security.

“This year our military efforts in Estonia have been immense. British troops form the largest part of NATO’s mission in the country, RAF Typhoons working in Estonia have scrambled to intercept Russian aircraft straying into NATO airspace, and British Apache and Wildcat attack helicopters have bolstered NATO efforts to enhance our security, reassure our allies and deter our adversaries.

“So at this time of year we should all take a moment to be thankful for the sacrifices made by our troops, many of whom will be spending Christmas on our deployments and bases around the world – be it the Baltics, Ukraine or Afghanistan – and those in Britain too.”

My mission is very simple, it is to say thank you. Because of course in the next few days everybody in our country is going to spend Christmas with their families, and you are going to be here. A long way away, in a pretty cold place, at Christmas, in the Baltic States in Estonia.

And what you are doing is incredibly important because the reason everybody in our country can have Christmas in peace and security is because of what you are doing here. Quite literally what you are doing is showing that NATO works, and that NATO is an alliance to which we in this country are absolutely committed. And the idea of NATO is very, very simple. It’s all for one and one for all. And that means that when our Estonian friends want a commitment by the British Army we make that commitment with this Enhanced Forward Presence.

And they love it. It does fantastic things for the local community and I talked earlier on to Prime Minister Jüri Ratas and he says that the contribution of British troops is fantastic and all the engagement with the local population is wonderful. But it’s about much more than that. It’s a demonstration by our country that we are committed to the security and stability of the whole of Europe, and you are the most vivid and powerful possible symbol and expression of that support and commitment.

And that is why one billion people are protected by the NATO alliance. The most successful military alliance in history. And that is why we have peace and security and stability in Europe, and peace and stability in Europe for seventy years. And it is an incredible thing for me to come to Estonia and think that when I was a kid, when I was your age actually, Estonia was part of the Soviet Union and we are now here helping to protect Estonia and to guarantee its security.

It is a fantastic thing, it is a deeply moving thing for someone of my generation. Thank you all very much for what you are doing. Happy Christmas.