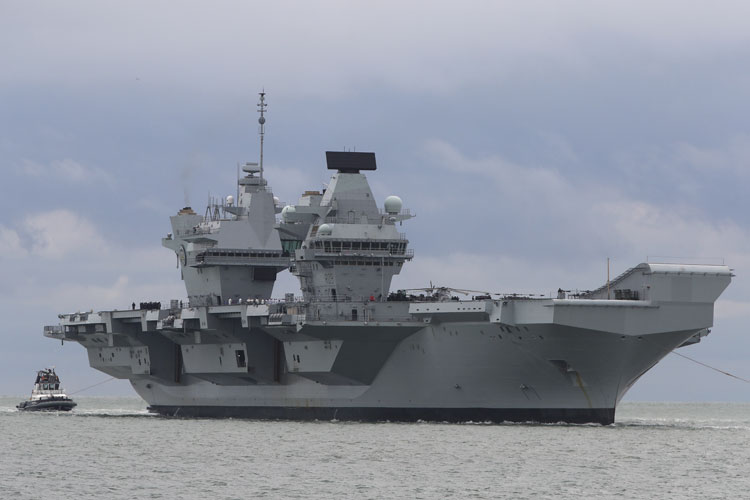 The following News Release was circulated by the Royal Navy just over an hour before the UK’s carrier HMS Prince of Wales sailed into her Portsmouth base.

Royal Navy News Release, 16 November 2019: HMS Prince of Wales will sail into her home port of Portsmouth for the first time today – marking a significant milestone in the Royal Navy’s aircraft carrier history.

Hundreds of people are expected to line the seafront to welcome the newest of Britain’s two aircraft carriers. Sailors will stand atop the flight deck of the enormous carrier – the second of the largest warships ever built for the Royal Navy – as she sails into Portsmouth Harbour at approximately 1.45pm. It is the second time in two years the city has welcomed one of the UK’s new carriers, following HMS Queen Elizabeth’s arrival in August 2017.

Captain Darren Houston, the Commanding Officer of HMS Prince of Wales, said: “Our first entry to Portsmouth represents the successful culmination of the build and sea trials period in which my ship’s company and industry partners have worked so closely together to bring HMS Prince of Wales into service with the fleet.

“I am extremely proud of them and their families for their perseverance, patience, and extraordinary efforts.”

One of those on board who will be sailing into Portsmouth on board the carrier for the first time is Air Engineering Technician Ben Daniels. He said: “I feel immensely proud to be a member of HMS Prince of Wales’ ship’s company while the ship is heading into its home port for the first time.

“It is a historic moment for the Royal Navy and I am looking forward to many years of service on this incredible ship.”

The carrier sailed from Rosyth, where she was assembled, in late September with a mixed ship’s company of Royal Navy sailors (600-plus) and around 300 civilian contractors on board to take her through an autumn of trials in the North Sea.

“It’s been a unique experience watching the ship transition from its initial build to an operational warship,” said Air Engineering Technician Anthony Greatorex.

“It’s a proud moment to be a member of the first ship’s company and an opportunity that I am unlikely to get again.”

HMS Prince of Wales’s arrival means Portsmouth Naval Base is now home to two aircraft carriers. The yard has been modernised to accommodate the two behemoths, with £30 million spent on strengthening and upgrading the base’s Victory Jetty. For Portsmouth native, Chef James Bascran, it will be a proud moment in his naval career and for the city he was born and raised in. He said: “I am really excited for the ship coming into Portsmouth for the first time. My family will be watching and I am looking forward to showing them this incredible ship.”

HMS Prince of Wales arrives after around eight weeks of trials after sailing from Rosyth Dockyard on the Forth eight years after she was laid down. When she sailed beneath the iconic Forth crossings – lowering her main mast to do so – it meant the two largest warships ever built for the Royal Navy were at sea simultaneously, with HMS Queen Elizabeth currently off the east coast of the USA testing her F-35 Lightning fighter jets.

Since that moment in September, the milestones have been racking up before her arrival in the Solent today. During the trials, the first aircraft touched down on the flight deck, as a Merlin helicopter was guided safely in to land, before the ship then hit top speed as she tested her engines to the max. Following a brief pit stop in Invergordon, HMS Prince of Wales was tested in heavier seas to see how she handles in challenging weather. The carrier faced Sea State 6 (waves up to 20ft high) and carved through them relatively untroubled. Most recently, she carried out tests on her flight deck to ensure she can now host aircraft permanently on board.

HMS Prince of Wales will be formally commissioned before the end of the year.