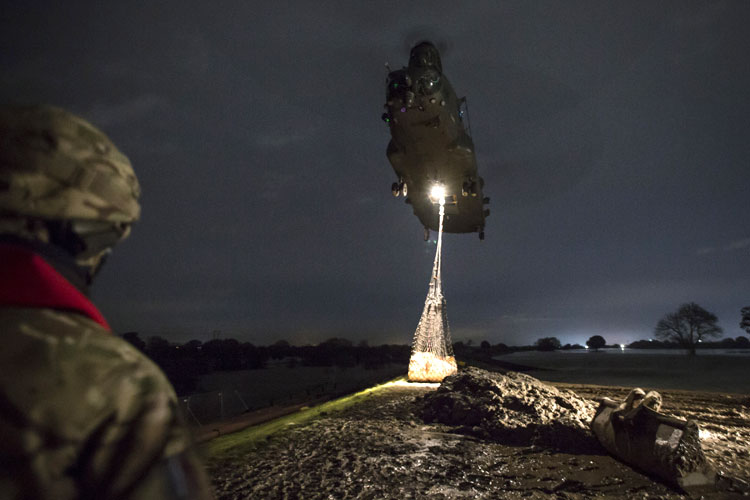 RAF News Release, 11 November 2019: RAF Odiham Chinook Force has been called in to assist at a pumping station near Doncaster following heavy rainfall. The team dropped 40 tonnes of aggregate at specific points to ensure flood defences could continue to work properly.

The RAF Chinook flown by 18(B) Sqn was called in late on Sunday 10 Nov by the environment agency to move 40 tonnes of aggregate from a local quarry on to an inaccessible spit of land in order for their engineers to bolster drainage channels and improve the flow of water into the designated flood plains East of Bentley.

Not a stranger to being called to support local authorities, the Chinook with its immense lift was able to move all the aggregate in 10 sorties, stopping for a refuel after the first 12 tonnes. Expertly assisted by a team from the Joint Helicopter Support Squadron from RAF Benson, the loads were moved with precision utilising the underslung load capability of the aircraft.

Speaking from Silver Command, Flt Lt Warr said “The Chinook was requested to support a very specific task, the movement of aggregate onto a small spit of land cut off from the main routes. This was to assist local agencies with their heavy plant bolster flood defences. The crew from Odiham and team from JHSS have done a fantastic job, working at night in a confined space with precision to deliver safely everything that was asked of them.”

“RAF Chinook crews regularly train at night for just such situations, ensuring they can operate safely in even the most testing environments”.