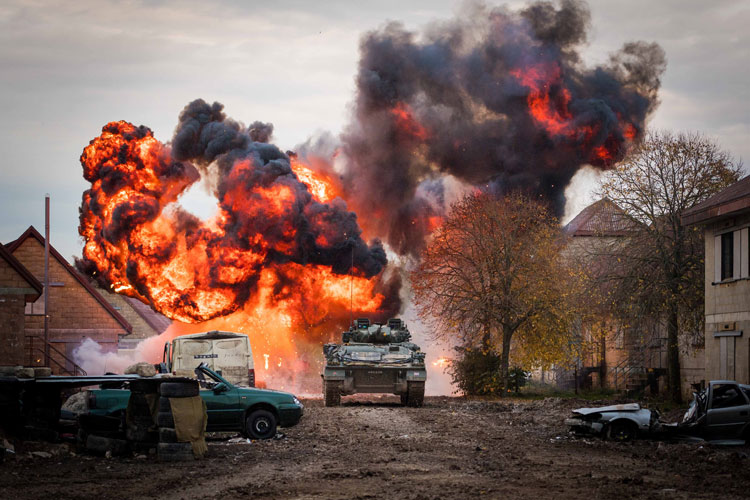 The 2019 Army Combat Power Demonstration (ACPD) took place on Salisbury Plain from 28 – 30 Oct 2019, set in and around Copehill Down Village.

UK MoD Press Release, created 29 October and released 06 November 2019: The 2019 Army Combat Power Demonstration (ACPD) took place on Salisbury Plain from 28 – 30 Oct 2019. It was set in and around Copehill Down Village – the Army’s primary urban combat training facility – and showcased a variety of the Army’s most modern capabilities.

Innovation and technology featured prominently with drones, cyber, artificial intelligence all on show, and Army subject matter experts on hand to explain how these capabilities contribute to the Army’s world-class status. Highlights included the audience being immersed in a simulated attack on the village by Challenger 2 tanks, Warrior AFVs, Engineers and attack helicopters and then a hostage rescue by dismounted infantry and military working dogs.

In addition to meeting soldiers and seeing the latest in-service equipment, visitors saw the next generation of armoured vehicles with both Ajax and Boxer providing an insight into what the Army’s Strike capability will look like. A contract worth £2.8 billion has been signed to provide around 500 state-of-the-art Boxer armoured fighting vehicles to the British Army. Funding has been approved for the Mechanised Infantry Vehicle (MIV) programme to deliver Boxer armoured vehicles and form part of the Army’s Strike brigades. The Army’s Strike brigades are new units set up to deploy rapidly over long distances across varied terrains.

The Boxer can be deployed around the world to deliver soldiers around the battlefield, travelling long distances quickly, cross country, under enemy fire and in the most austere of environments. It is modular by design, meaning that the same vehicle base platform can be quickly reconfigured with different modules to fill different roles. Initially the Army will buy a mixture of the troop-carrying variant, ambulances, command vehicles, and specialist designs to carry military equipment.

The UK announced in 2018 that it would re-join the Boxer programme within the Organisation for Joint Armament Cooperation and explore options to equip the Army with the 8×8 high mobility, network-enabled armoured vehicles to transport troops onto the frontline and modernise its vehicle fleet and meet the Army’s Mechanised Infantry Vehicle requirement. The Army’s Strike brigades are new units set up to deploy rapidly over long distances across varied terrains. The UK played a central role in the original design, development and testing of the Boxer. In re-joining the programme last year, the UK reassumed the rights it had as a project partner.

Editor’s footnote. The above release has been printed verbatim but as we, like many of our specialist defence media colleagues, were not invited to ACPD 2019 to cover the event we cannot verify its accuracy. Although mention is made above of AJAX being present, no images showing the new vehicle at the event were actually issued to accompany the release on the MoD News Packages site. The only images of British tracked infantry fighting vehicles at the event released by MoD show the aged and much in need of an upgrade Warrior IFV, though curiously a single image of Danish troops dismounting from a CV90, taken on 25th October, was issued. Closer inspection of the three soldiers in front of the Warrior at Copehill Down also suggests they are Danish – look at their weapons – who wear similar Revision combat helmets and brown (often AltBerg) combat boots but MultiCam rather than MTP camo. Additionally, although eleven images of BOXER at and around Copehill Down were also released yesterday (6th) these too were actually taken at the end of the week before ACPD 2019.

It would be great if independent journalists were able to freely report firsthand on the British Army on exercise and display, but under the current UK MoD policy of writing the news itself (what we describe as propaganda when other countries do it) instead of granting free access to accredited media to report in an unbiased manner we can only bring readers what the civil service decide to eventually release. We are also unable to inform you right after the event but have to wait until a week, or sometimes more, afterwards when the sloth-like MoD bureaucracy finally clears images and (usually rather limited) details for release.

For more on the Boxer MIV story see:-