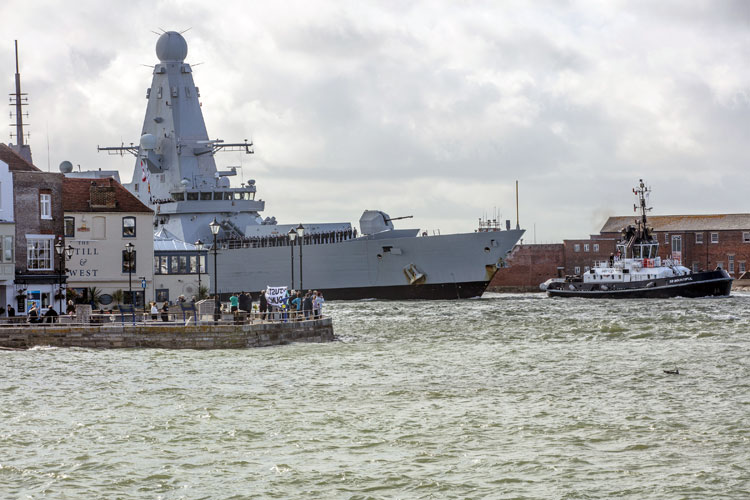 Yesterday HMS Duncan returned to her Portsmouth home after protecting over one million tonnes of shipping in the Persian Gulf on Operation KIPION.

More than 500 friends and family were waiting with banners, placards, balloon animals, matching T-shirts and fancy hats to welcome 250 sailors and Royal Marines who’d completed one of the most varied – and demanding – deployments by a Royal Navy warship in recent years.

“When we arrived in the Gulf it was extremely hot, there was real uncertainty and a genuine threat. In protecting shipping, we did what the Royal Navy has done for hundreds of years,” said Commander Tom Trent, Duncan’s Commanding Officer.

“It was rewarding because we could measure what we achieved: 29 transits of the Strait, 26 ships accompanied and not one ship was taken on our watch.”

The mission Duncan completed her deployment performing was very different from that which she set out to perform back in March. The destroyer joined French aircraft carrier Charles De Gaulle as part of the multinational Carrier Strike Group GAN 19 operating off Syria on Operation INHERENT RESOLVE; HMS Duncan provided air defence to the group as part of operations against ISIS forces in the region.

May and June saw HMS Duncan committed to various NATO exercises in delivering humanitarian aid and countering human/arms-trafficking before joining Standing NATO Maritime Group 1 for Exercise SEA BREEZE in the Black Sea where, once again, she was employed in her air-defence role and hosted the President of Ukraine, Volodymyr Zelensky.

Little more than two weeks later, she found herself in the Gulf as part of the UK’s response to rising tensions with Iran and the threat to merchant shipping legally plying its trade. Duncan stepped in while HMS Montrose, which has performed the bulk of the escort duties since July, underwent a short period of maintenance.

Commander Trent said his men and women handled that shift from international diplomacy to conducting a dangerous real-world mission. “I cannot put my pride I feel about them into words. They have shown resilience, determination, enthusiasm and a good smile at the end,” he added.

“The ship is just a big lump of steel with some fancy equipment inside – HMS Duncan is the ship’s company and the family behind them.

“This is a special ship with special people and it has been my pride to have led them through this adventure across 40,000 miles of seas and oceans and a variety of challenges and opportunities.”

Ten friends and family of Lieutenant Jo Peacock were eagerly awaiting the junior officer’s return. They donned feathered hats and unfurled a banner: ‘The peacock has landed’ to catch Jo’s attention before disappearing for a large family meal of chilli con carne once reunited.

“When we heard she was going to be a month late coming home we were disappointed,” said mum Gill from Aylesbury.

“But we’re a Navy family – I’m ex-Navy, Jo’s dad Tim was in the Falklands, you get used to it. And Jo has done us proud.”

Able Seaman Ben Clarke said: “The highlight of the deployment was the visit to Ukraine; an opportunity to showcase the Type 45 destroyer – and the Royal Navy – in the Black Sea, welcome the President of Ukraine and experience the culture and delights of the city of Odesa.”