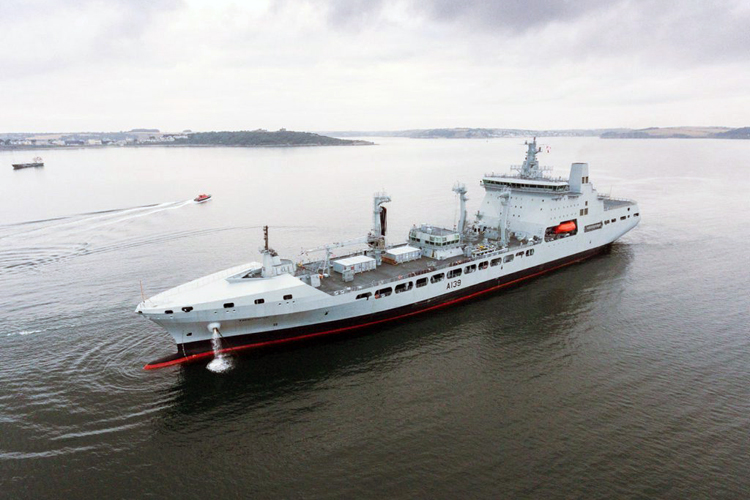 The Royal Fleet Auxiliary today saw its numbers bolstered as RFA Tideforce – the last of four new-generation tankers – was welcomed into the Fleet.

Royal Navy News Release, 30 July 2019: A service of dedication was held in Dorset for the 39,000-tonne ship – second only in size to the UK’s two new aircraft carriers. RFA Tideforce will now join her sister ships Tidespring, Tiderace and Tidesurge in providing fuel at sea to Royal Navy, NATO and allied warships, as well as other supplies and fresh water when required.

After receiving military equipment – communications and IT systems, defensive weaponry – fitted in Falmouth to turn a tanker into a naval tanker and extensive trials, Tideforce recently arrived in Portland to be officially accepted into operational service. Commodore Duncan Lamb, head of the RFA, said: “RFA Tideforce’s arrival into the Royal Fleet Auxiliary represents the culmination of a major project to modernise and update the UK’s Fleet Replenishment Tankers.

“I am indebted to all from the UK and abroad who have contributed to the success of the project and the ship’s company who have provided the final piece of the jigsaw by bringing the ship alive through delivery, trials and training.

“It’s incredible to think it’s taken only 13 months since delivery to today.”

Fleet Commander Admiral Kyd – first commanding officer of carrier HMS Queen Elizabeth which the Tides were built to support – hailed the advent of the fourth and final ship in the class. “This is the next chapter in the regeneration of our Fleet,” he stressed.

“The Royal Fleet Auxiliary are a critical part of our Fleet and I look forward to a new era of carrier power projection.”

Each of the four Tides can deliver more than 1,500 cubic metres of fuel every hour – nearly 400,000 gallons, or 1½ million litres… enough to fill the tanks of more than 27,000 family runarounds. As well as their supply duties in support of the Royal Navy, the vessels can also undertake a wide range of independent operations, such as patrols policing shipping lanes and humanitarian relief.

Vice Admiral Chris Gardner, Defence Equipment and Support Chief of Materiel (Ships), said: “This event marks one of the final milestones of this major shipbuilding programme and affords a moment to reflect on the vital importance of the work DE&S does to provide our Armed Forces with the equipment and support they need.”