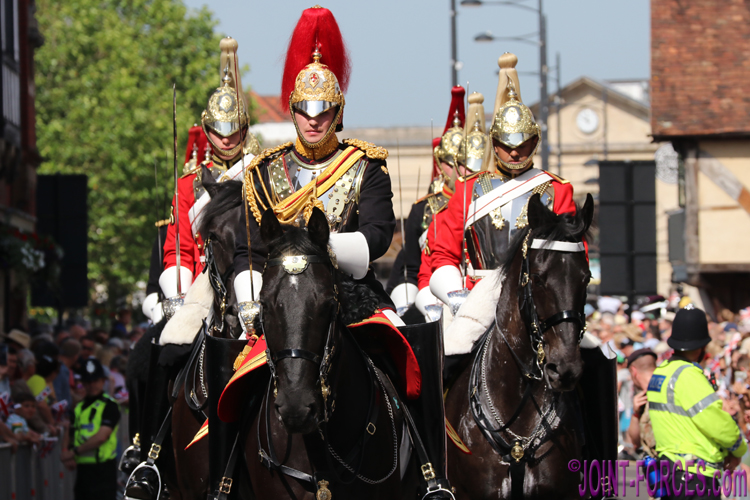 The eleventh annual Armed Forces Day gives people around the country the opportunity to show their support for the Armed Forces community.

UK MoD News Release, 29 June 2019: Towns and cities across the UK will mark Armed Forces Day with more than 300 events planned nationwide. The annual event is a chance for the whole country to celebrate the work of service personnel, reservists, veterans, cadets and their families and friends. Her Royal Highness The Princess Royal, Princess Anne, will take the salute during a parade of more than 1,300 service personnel, cadets and veterans at the Armed Forces Day National Event in Salisbury.

This year’s host city will also treat thousands of visitors to military displays, with a flypast by the Royal Air Force’s Red Arrows and an aerial display by the British Army’s Parachute Regiment.

Military musicians including bands from the Royal Marines and the Royal Air Force will entertain crowds during the parade. Salisbury will end the day’s celebrations with a concert including a performance by the Kaiser Chiefs. Defence Secretary Penny Mordaunt will also visit Salisbury to watch the parade and visit serving personnel in the military village.

Defence Secretary, Penny Mordaunt said: “On Armed Forces Day we celebrate the exceptional contribution our service personnel, regular or reservist, veterans and their families make to our security and prosperity. The Armed Forces protect us and defend us around the world and serve communities throughout our country. With more than 300 events taking place across the UK, it’s incredible to see people coming together to show their support for the Armed Forces.”

The Armed Forces and Salisbury hold a close and historic relationship and the national event will give the people of Salisbury and the public as a whole the chance to thank the Armed Forces for their tireless support towards the city’s recovery following last year’s Novichok attacks.

Currently our Armed Forces are part of 35 operations in 30 countries across the globe, from counter-poaching exercises in Africa, to training allies in Ukraine and helping to ensure the territorial defeat of Daesh in Syria. While families at home celebrate Armed Forces Day at events across the nation, troops will be working around the clock in many time zones to keep us safe and protect the UK’s interests.

The accompanying images were taken this morning during the Military Parade at the Armed Forces Day National Event in Salisbury city centre. J-F would like to sincerely thank the Communications Officers at Wiltshire Council for all their sterling assistance this weekend.