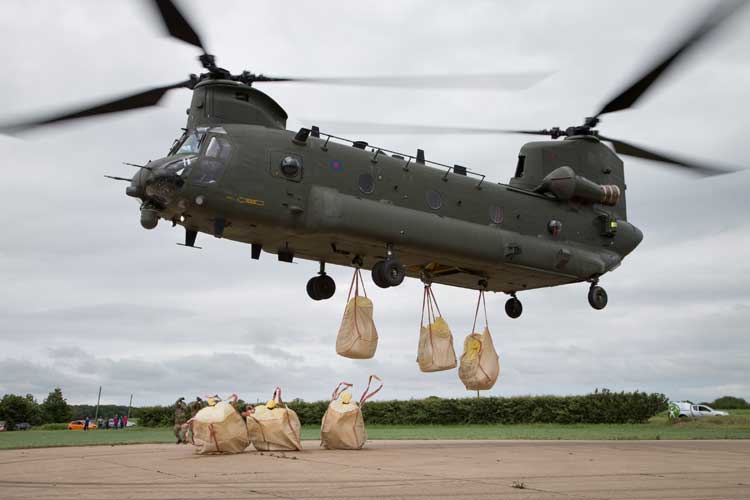 A Chinook was deployed Thursday to try and stem the flow of water in Wainfleet, Lincolnshire and was used again Friday, alongside a Puma, to tackle the floods.

MoD News Release, 14 July 2019: The Environment Agency confirmed that the River [Steeping] had breached its defences after more than double June’s average rainfall came down within three days. An assessment by the Lincolnshire Local Resilience Forum and Environment Agency decided that air support was needed to create a plug to stem the flow, while the evacuation of the village takes place. The RAF are able to reach an area that had become inaccessible to responders on the ground thanks to the unique heavy lift capability offered by the Chinook.

The RAF, with support from a Joint RAF and Army unit, are flying in almost 70, one tonne bags of gravel suspended under a Chinook, dealing with adverse weather conditions. This operation is designed to reinforce the flood defences and drastically reduced the chances of further flooding, which has seen some residents evacuated from their homes.

Britain has been hit by a deluge of rain this week, with more than a month’ worth of rain falling in just a few days. Scattered showers are continuing into the weekend for many parts of the country, with several towns experiencing localised flooding as a result of the heavy rain. The Environment Agency has issued 14 flood warnings and 51 flood alerts across the UK.

RAF Benson in South Oxfordshire is a support helicopter main operating base working within the Joint Helicopter Command. RAF Benson is home to two front-line Puma HC2 helicopter squadrons, and one Operational Conversion Unit, flying a mix of Puma HC2 and Chinook HC4 helicopters. It is also home to the civilian National Police Air Service and the Thames Valley Air Ambulance that operate 24 hours a day.

The Secretary of State for Defence, Penny Mordaunt, said: “The skilled RAF helicopter pilots and crew, have provided vital support to tackle the flooding in Lincolnshire. This will help the emergency services on the ground who are doing all they can to aid local residents.”

Work continues in the affected area to ensure the safety of residents and members of the public, with the Environment Agency as the lead agency.