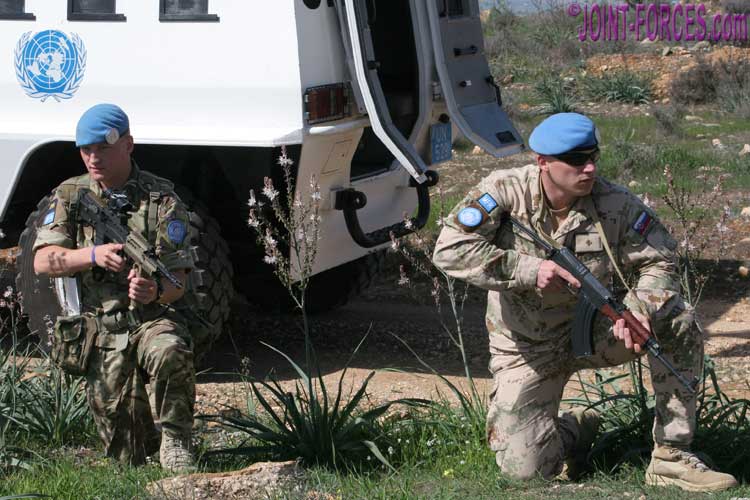 Penny Mordaunt has announced her intention to increase the number of servicewomen on peacekeeping operations as a commemorative ceremony took place at the Cenotaph.

News Release, 24 May 2019: Minster for the Armed Forces Mark Lancaster commemorated the sacrifice and successes made by UN Peacekeepers around the world during a ceremony at the Cenotaph.

As a demonstration of the commitment to UN Peacekeeping operations and the importance that they play in protecting communities, the Defence Secretary has announced a number of new measures to reaffirm the role of servicewomen on these important operations:

Defence Secretary Penny Mordaunt said:“The protection of innocent civilians is some of the most valuable work that our Armed Forces undertake, and it is often done in the most dangerous places in the world. “Our armed forces already provide an invaluable contribution to peacekeeping operations both by protecting vulnerable women and empowering them to help bring about lasting peace. Having women in these roles is absolutely vital. On the day that we remember all those who have contributed to the successes of peacekeeping around the world, it is right that we redouble our efforts to ingrain the role of women into our own operations.”

Minister of State for the Commonwealth and the UN, Lord (Tariq) Ahmad of Wimbledon said: “It is important to pay tribute to the more than 3800 UN peacekeepers who have given their lives in the name of peace. We owe our peacekeepers a huge debt of gratitude, and we owe it to them to ensure they are the best they can be.

“That is why the UK Government remains committed to supporting the UN Secretary-General’s Action for Peacekeeping agenda, and promoting the ‘three Ps’ approach including better Planning of missions; more Pledges of quality people and equipment; and better Performance.

“It is right that our peacekeeping forces better reflect those they serve and protect and increasing the number of women in peacekeeping and promoting women’s meaningful inclusion in peace processes is a fundamental part of the UK’s National Action Plan on Women, Peace and Security.”

The UK currently has around 600 personnel deployed on UN peacekeeping operations around the world, including approximately 270 in Cyprus and 300 in South Sudan. British troops in South Sudan have recently begun work to build a new hospital in Malakal, their second for the UN mission, in a display of the diversity of capabilities provided by UK personnel. The Royal Engineers have been tasked to work with the Indian Army and build a new hospital, delivering vital medical support and allowing the UN to continue to deliver their mandate in Malakal, where there is a large Protection of Civilians camp.

Minister for the Armed Forces Mark Lancaster said: “Across the globe we have hundreds of highly skilled servicemen and women who, in challenging conditions, put their lives on the line to protect innocent civilians and contribute to lasting peace in the places that need it the most.

“In building this new hospital the Royal Engineers are allowing the UN mission in South Sudan to continue and ensure the safety of thousands of displaced people who otherwise would be vulnerable to dangers that many in the UK cannot comprehend.”

Featured, Servicewomen, UN, UNFICYP, United Nations
You may also like