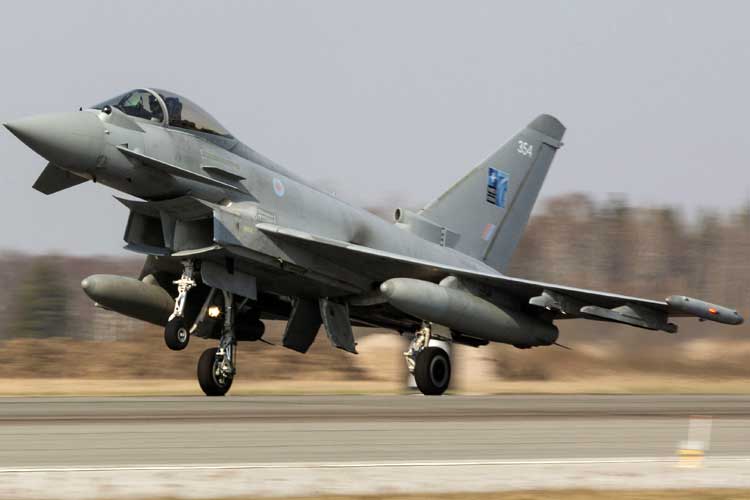 Leading the mission, the Commanding Officer of 121 Expeditionary Air Wing, Wing Commander Dave Boreham, explained: “As part of its assurance measures NATO has committed to protect Estonian airspace and the UK in turn, as a fully committed NATO partner, regularly undertakes a turn of this duty.”

The RAF fighters were the last element of 121 EAW to arrive in Estonia to conduct Baltic Air Policing, the NATO mission to provide Quick Reaction Alert patrolling of the Baltic Sea area around Estonia, a NATO member since March 2004.

Explaining how QRA worked, one of the pilots, Squadron Leader Jamie Norris said: “Crews are on permanent readiness to respond to any potential threat and can be scrambled on a 24/7 basis. Our role is to preserve peace and prevent conflict”

From May the RAF will be at readiness to scramble if required to protect NATO airspace, replacing the German Typhoons who have been carrying out the duty for the last few months. Sqn Ldr Norris added: “Aircraft can be launched in a very short space of time; the role we are carrying out is identical to that performed by Typhoons back in the UK from their Coningsby or Lossiemouth bases.”

Largely comprising people from RAF Coningsby, 121 EAW consists of a range of branches and trades needed to keep four state of the art aircraft operating for several months away from home. Flying in support of NATO Air Policing missions is a regular duty for RAF Typhoon Sqns who last operated from Estonia in 2016.

Wg Cdr Boreham added: “The welcome we have had from our Estonian hosts and German partners has been superb and we look forward to 121 EAW working alongside its NATO allies to deliver a successful mission.”