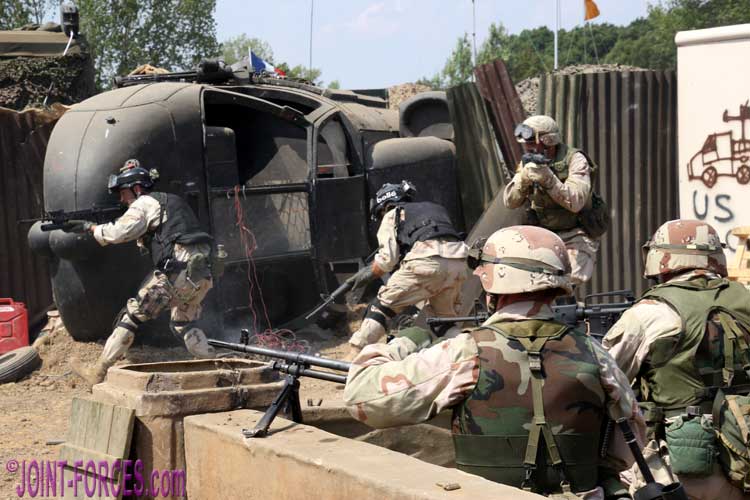 The annual War And Peace Revival living history show is now underway at its spiritual home, the Hop Farm at Beltring in Kent, writes Bob Morrison.

Not only the world’s largest restored military vehicle show but also a massive militaria collectors’ fair with multi-period historical home front and battle re-enactments running in harmony War & Peace 2018, often just referred to as Beltring by military vehicle owners and enthusiasts, is running until Saturday evening.

Despite delays caused by the infuriating series of passenger-irritating guard strikes organised by one of the railway unions, we made it to the showground near Paddock Wood just in time to catch Three Sixty History recreating part of the 1993 Battle of Mogadishu. Made famous by the book and film Black Hawk Down, the incident portrayed centres on the US Rangers and Delta rescue mission following the downing of American UH-60 helicopters in Somalia; this year the living history role-players have not only brought along their crashed Black Hawk prop but also surprised the crowds with an actual MH-6 Little Bird helicopter airframe!

After this display we headed off into the militaria fair to both meet old friends in the trade and check out what is new on the military surplus side. Martin and Sharon of WhoCaresWears provided one of the biggest surprises as down one side of their marquee could be found a range of now surplus 2012 contract UK MoD combat boots complete with boxes and at knock-down price of just £65 a pair. Recently procured direct from official Government Disposal Agents, these appear to be the last of the old contract boots making way for the new batch ordered in 2017; at those prices I doubt they will be taking many pairs home.

For more details on the show, participants, timings,and how to get there etc. go to WarAndPeaceRevival.com