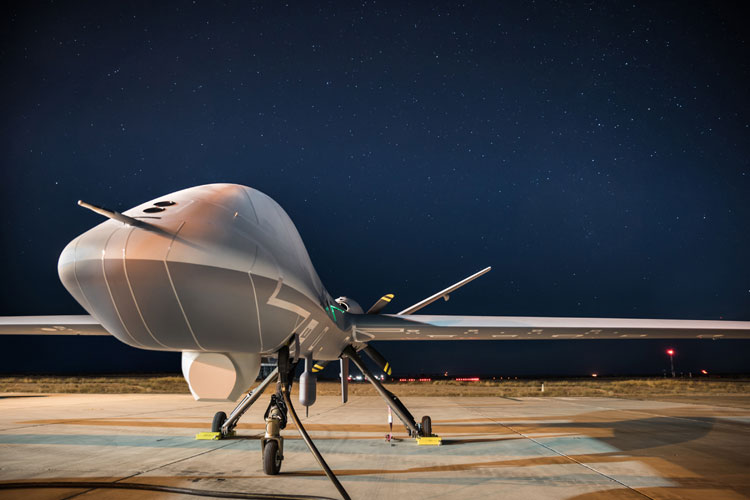 A new Remotely Piloted Air System (RPAS) ordered for the Royal Air Force will fly non-stop from the United States to RAF Fairford in the UK on 11th July.

RAF Press Release: The UK is the lead customer for the next-generation aircraft which will be known as the Protector RG Mk.1 when it enters service in the early 2020s. Operated at all times by a fully qualified pilot, Protector is the World’s first RPAS to be designed, built and certified against stringent NATO and UK Safety Certification standards equivalent to manned aircraft. The flight from North Dakota to Gloucestershire is likely to take over 20 hours and will be the first across the Atlantic by a Medium Altitude RPAS and the first time one has entered UK airspace under beyond line-of-sight communication control.

The UK Minister for Defence Procurement, Guto Bebb MP, said: “Protector’s first arrival in the UK is an exciting milestone in our mission to get the most advanced equipment to combat the intensifying threats that we face. With almost double the endurance of its predecessor and armed with the latest missiles and surveillance technology, this unmanned aircraft will not only give us a decisive advantage on the battlefield but will help us reach new heights to keep Britain safe at home and overseas.”

Air Vice-Marshal Rochelle, Chief of Staff Capability, said: “The first trans-Atlantic flight of the Protector reinforces the Royal Air Force as being at the forefront of cutting edge technology. Offering over 40 hours’ endurance Protector will provide the RAF with unrivalled intelligence gathering possibilities.  The decision to expand our Remotely Piloted Air System (RPAS) fleet with this world leading aircraft will offer a game changing leap in capability and marks the next step in our modernisation in our 100th year.”

Protector is capable of supporting an array of homeland defence tasks, including Military Aid to Civil Authorities – for example search and rescue, disaster monitoring or flood prevention activities. For the first flight across the Atlantic to succeed the RAF provided guidance, advice and supervision of UK airspace procedures. The aircraft will be placed on static display at the Royal International Air Tattoo, demonstrating a key component of the future of next generation RAF Air Power and UK leadership in this field. Artist’s impression of the Protector RPAS ordered for the RAF which will fly non-stop from the United States to Fairford in the UK on 11th July [© General Atomics Aeronautical Systems inc.]