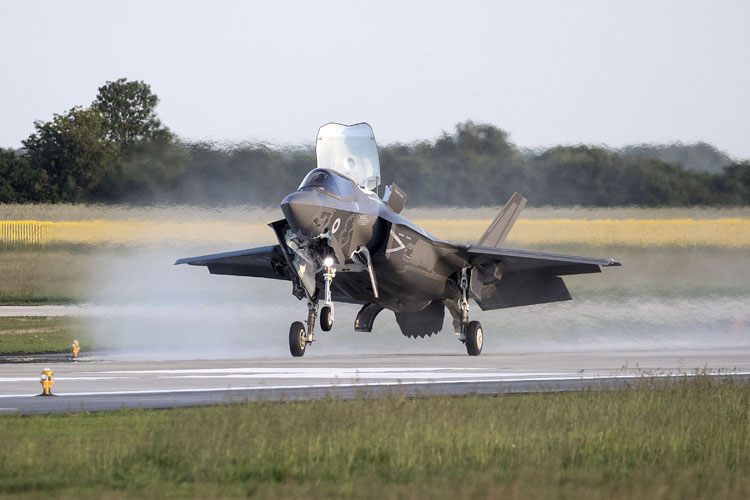 The first of Britain’s next-generation F-35B fighter jets have arrived home two months ahead of schedule in a major milestone for the Royal Air Force and Royal Navy.

Press Release: The first of Britain’s new cutting-edge aircraft arrived into RAF Marham their new home in Norfolk. They touched down this evening after a trans-Atlantic flight from the United States, where Britain has more of the jets and 150 personnel in training. The F-35s took off from Marine Corps Air Station Beaufort earlier today, and were flown by British pilots of the newly-reformed 617 Squadron, which was immortalised by the famous Dambusters’ raid of World War II.

Welcoming the news, Defence Secretary Gavin Williamson said: “These formidable fighters are a national statement of our intent to protect ourselves and our allies from intensifying threats across the world. With a game-changing ability to collect crucial intelligence, fight wars and tackle terrorism, these are the most advanced jets in British history. The work that’s gone into their early arrival shows they have the people to match. Our defence industry and military have always been at the very forefront of technology, and today’s momentous arrival of these incredible jets shows we are upholding our proud tradition of innovation while keeping Britain safe from the gravest of dangers.”

The F-35s’ arrival in the UK two months ahead of schedule provides an opportunity for support staff to get a head-start in getting the aircraft ready for operational service at the end of this year. Around £550m has been invested in RAF Marham as part of a major change programme to get the base ready to house the new jets. The base has seen an upgrade in facilities, resurfaced runways and the addition of new landing pads to accommodate the jet’s ability to land vertically.

Chief of the Air Staff Air Chief Marshal Sir Stephen Hillier said: “In the RAF’s centenary year, it’s great to see the most advanced and dynamic fighter jet in our history arrive today at RAF Marham – and with the modern Dambusters in the cockpit, this homecoming truly feels like an historic moment in British airpower. If you can’t see us coming, you won’t be able to stop us, so with its stealth and other world-beating technologies the F35 Lightning takes the Royal Air Force and Royal Navy to a whole a new level of capability.”

This autumn, the first landing of the F-35 will take place on HMS Queen Elizabeth in the next phase of trials. Having both ship and aircraft operating together for the first time will be another significant moment for the Armed Forces. The First Sea Lord, Admiral Sir Philip Jones said: “Ever since aircraft first operated to and from ships, the Royal Navy has been at the forefront of maritime aviation and the arrival of our first F35Bs in the UK today, flown by both RAF and Fleet Air Arm pilots, is another important milestone on the way to restoring our place as leaders in the field of aircraft carrier operations.  Once combined with our new aircraft carriers, HMS Queen Elizabeth and her sister ship HMS Prince of Wales, these extraordinary jets will sit at the heart of our country’s globally deployable expeditionary forces and provide the potent conventional deterrent we need to ensure our national security.“

The Lightning, as the aircraft will be known in the UK, is the first to combine radar-evading stealth technology with supersonic speeds and the ability to conduct short take-offs and vertical landings. It will be jointly operated by the Royal Air Force and the Royal Navy and can operate from land and sea, forming a vital part of ‘carrier strike’, the use of the aircraft from Britain’s new Queen Elizabeth Class aircraft carriers.

This is the first tranche of F-35s to arrive, with RAF Voyager aircraft providing air-to-air refuels on their trans-Atlantic journey. More jets are due in Britain later this year, and there is an overall plan to procure 138.

The F-35 is the world’s largest defence programme at over $1.3 trillion, and UK industry is providing 15% of every one of over 3,000 jets set for the global order book. That makes the economic impact greater than if we were building 100% of all 138 aircraft which we intend to buy.

The programme has already generated $12.9Bn worth of orders and at peak production will support thousands of British manufacturing and engineering jobs. Just last week, the F-35 programme awarded a contract worth over $2bn for aircraft propulsion systems, which will have significant benefits for Rolls-Royce and their supply chain.

F-35B, Featured, Lightning, RAF, RAF Marham
You may also like