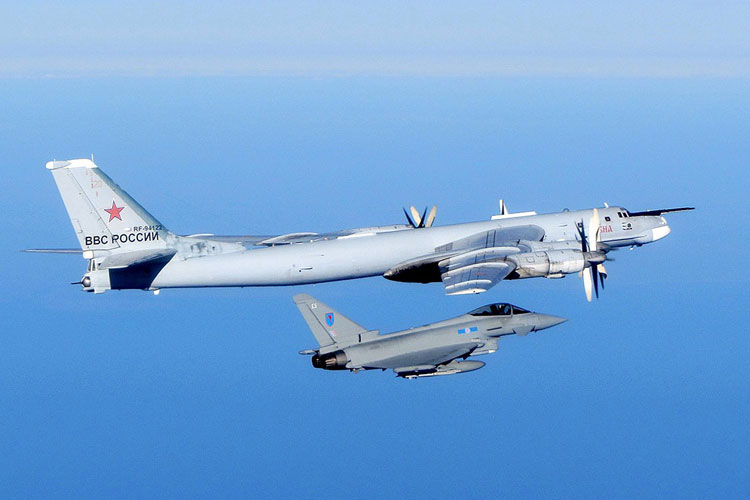 The Ministry of Defence will invest up to £80 million in a new computer system to boost the RAF’s speed and accuracy in protecting the skies, Defence Secretary Gavin Williamson has announced.

Press Release: Known as Project GUARDIAN, the new Air Command and Control System will support the continued early detection and rapid response to potential hostile or suspect aircraft that pose a threat to UK sovereignty, be that terrorists or state-based actors.

This project will see the current systems at RAF bases in the UK and Falkland Islands replaced with the new technology. It will allow the RAF to exercise command and control of UK and NATO fighters to intercept aggressive or suspect aircraft that are a threat. The RAF routinely intercept, identify and escort aircraft that transit international airspace within the UK’s area of interest and continue to be on call 365 days a year.

Since 2013 RAF jets have launched 68 times to intercept or monitor suspect aircraft in the skies around Britain – half of these in response to Russian planes.

IBM Services in the UK is leading the way to develop and install the replacement system, with work being carried out by a dedicated team of specialists at IBM locations across the country.

Defence Secretary Gavin Williamson said: “With hostile regimes such as President Putin’s Kremlin ripping up the international rulebook and terrorists still targeting our way of life, this cutting-edge technology gives our RAF the upper hand in the face of rapidly changing and intensifying global threats.

“This investment will play a vital role in making sure our fighter pilots are primed and ready to keep Britain safe and to counter aggression from those who seek to cause us harm.”

The Air Command and Control System is the computer system that takes in data to generate the Recognised Air Picture – a dynamic, real time depiction of aircraft in the airspace the UK control or patrol, with each being identified as friendly or hostile. The upgrades will continue improving the rapid exchange of real time command and control information and speed and accuracy of decision making.

The announcement comes as the RAF celebrates 100 years since its formation and demonstrates how the service is continuously looking at ways to design and innovate to meet the full spectrum of threats that the UK is currently facing.

The contract, which IBM UK won in competition, is for approximately £60 million with costed options that the MOD can exercise which would take the total value towards £80 million. It represents a continuation of IBM UK supplying the equipment to UK armed forces and includes five years of support services following the installations.

Director Intelligence, Surveillance, Target Acquisition and Reconnaissance, Dr Simon Dakin, of the MOD’s procurement organisation, Defence Equipment and Support, said: “GUARDIAN will provide a new Air Command and Control system connecting the UK’s defence network of radars and radio and delivering several new capabilities to improve communication and interoperability between UK, NATO and coalition aircraft, vital to the protection of the UK’s skies.”

Group Captain Steven Blockley, director of the RAF’s Director, National Air Defence and Space Operations, said: “The new system provides a quantum leap in technology and information exchange for the personnel charged with the Defence of the Homeland and will ensure that future homeland operations are conducted with equipment befitting the RAF as it reaches its 100th year. The equipment will ensure that new digital technologies, along with new requirements for future capabilities, will also allow us to seamlessly exchange data and threat information across the new RAF platforms, such as the P-8 maritime patrol aircraft and F-35 Lightning II, as well as continue to integrate with our NATO colleagues to ensure the UK National mission to protect our skies and the NATO Air Policing task are met fully.” A pilot from 6 Squadron, RAF Losseimouth in front of a line of Typhoon aircraft in full flying attire [Crown Copyright/OGL: SAC Charlotte Hopkins]