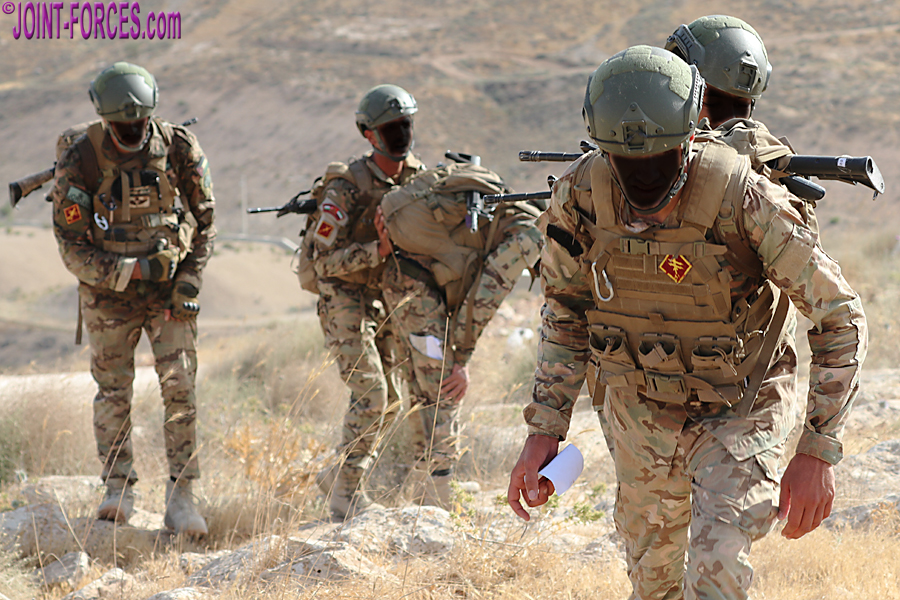 First of all for those readers who have been following my scribblings from KASOTC (King Abdullah II Special Operations Training Center) it was the Jordanian Royal Guard Team 2 who won the opening TOP SHOT event on Sunday.

Today commenced with the SHADENFRUDE, an absolute ball-breaker of an event which saw two hundred SpecOps contestants in five-man teams slogging and climbing for three hours or more across almost every available track at KASOTC. In addition to making their way as fast as possible between various checkpoints wearing or carrying body armour, helmet and weapon plus a daysack, into which some nice gentlemen in red shirts kindly insisted that a full sandbag be deposited at the start of the event, which could be weighed at any point around the course or at the finish, an additional challenge was sprung at the last waypoint. From here until the end one of the five guys and his sandbag had to be carried in a nylon lightweight stretcher (aka a litter) by his buddies. Once chosen, the casualty could not be swapped and he could only be carried on the stretcher. Possibly unsurprisingly, only three teams completed the full course inside the allotted three hours and it was those who were best at reading the terrain who beat the clock.

After a short refreshments break the teams then participated in the F300 4 LOMAH Relay event, to use its full title, which was an assault rifle and sniper rifle competition on the 300 metre range. Each team member in turn had to sprint to a firing position, load an assault rifle with a magazine containing five rounds, engage five electronic targets at increasing ranges, then sprint back to tag the next in line. Once all five had taken their individual shots the team had to sprint to five more firing pits where they had previously left their personal weapon (watched over by one of the Directing Staff of course) load another five rounds and simultaneously engage twenty five more targets at long range. Once again this event was against the clock and teamwork played a major part.

If all goes to plan I hope to bring today’s results tomorrow evening, but first of all the SNIPER EXTREME and ASYLUM events await us…..