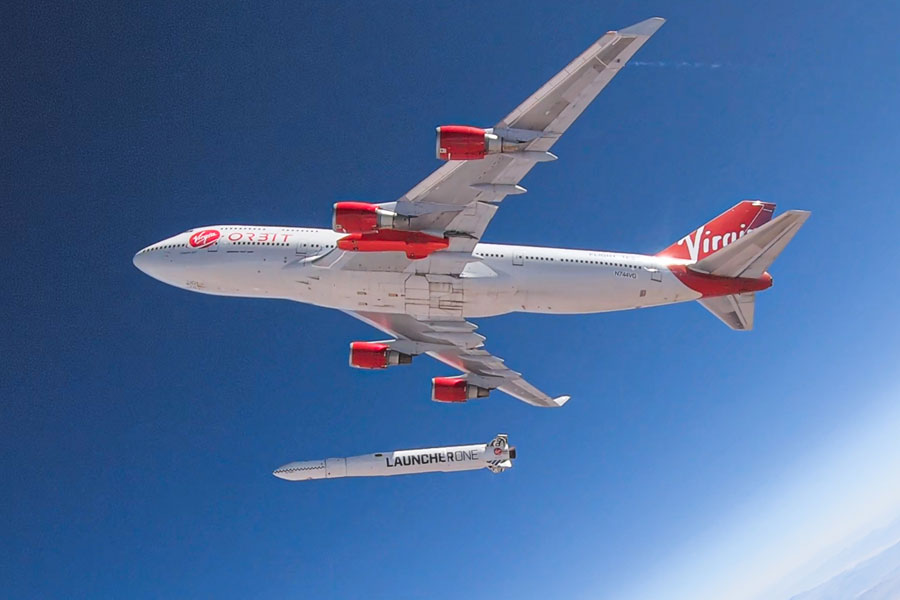 The UK’s first space mission partners announce the official opening of the Start Me Up orbital launch window for Monday January 9, 2023.

Press Release, Newquay, 06 January 2023: Partners for the United Kingdom’s first orbital launch announced today that the initial window for the historic Start Me Up mission will officially open on Monday, 9 January at 22:16 UTC with additional back-up dates continuing into mid and late January. Start Me Up is a collaborative effort between the United Kingdom Space Agency (UKSA), Cornwall Council, the Royal Air Force, and Virgin Orbit.

The Start Me Up mission will carry satellites from seven customers to space, including commercial and government payloads from several nations and a collaborative US-UK mission.

The LauncherOne system that will conduct the mission is now mated to its carrier aircraft, a Boeing 747 dubbed Cosmic Girl, at Spaceport Cornwall. Yesterday [Thursday] morning, Virgin Orbit’s LauncherOne system successfully completed an end-to-end launch rehearsal, taking the integrated system through to the loading of propellants and proceeding through terminal count, resulting in the verification of the health of the system and readiness of the team.

Given the number of ‘firsts’ being executed for this launch – the first orbital launch from UK soil or from anywhere in western Europe – Virgin Orbit and its partners will maintain a conservative posture with regard to system health, weather, and all other elements of scheduling.

Spaceport Cornwall received the United Kingdom’s first-ever spaceport licence from the UK Civil Aviation Authority (CAA) in November. In late December, Virgin Orbit was issued first-of-their-kind launch and range control licences, which ensured all regulatory, safety, and environmental requirements have been met. And this week, the CAA announced that all of the satellites flying on this mission have received their licences as well.

The forthcoming mission from Cornwall, titled Start Me Up in honour of the Rolling Stones’ 1981 hit, will contain many firsts: the first orbital launch from the United Kingdom, the first international launch for Virgin Orbit, and the first commercial launch from western Europe.

Ian Annett, Deputy CEO at the UK Space Agency, said: “We are entering a new era for space in the UK with the first ever satellite launch from UK soil and from Europe. This is a significant landmark for the nation, the UK Space Agency and for all those who have worked so hard over many years to make our ambitions to create a commercial space launch capability a reality.

“The development of new orbital launch capabilities is already generating growth, catalysing investment and creating jobs in Cornwall and other communities across the United Kingdom. This will lead to new careers, improved productivity and inspire the next generation of space professionals, and this is just the beginning. I look forward to seeing more launches from other UK spaceports over the next year, putting us firmly on the map as Europe’s leading destination for commercial small satellite launch.”

Dan Hart, Virgin Orbit CEO, said: “After ensuring that every technical aspect is sound and every regulation and code has been satisfied, it is gratifying to see this historic endeavour on the verge of coming to fruition. This launch represents the opening of a new era in the British space industry and new partnerships across industry, government, and allies. Space is already responsible for tens of thousands of jobs across the UK, the global industry is growing quickly, and so is the potential. And this launch is demonstrating that with the Virgin Orbit LauncherOne system an airport can become a spaceport that sends humankind’s innovations on their journey.”

Melissa Thorpe, Head of Spaceport Cornwall, said: “This is a phenomenal moment with incredible international collaboration. Virgin Orbit, the UK Space Agency and all of our partners are breaking new ground to transform access to space across the world from right here in Cornwall. My team at Spaceport Cornwall have worked so hard to get this far and we wish everyone the best of luck as the launch window opens, we are ready.”

Tim Johnson, Director for Space Regulation at the UK Civil Aviation Authority said: “Effective licensing forms an integral part of UK space activity, and with public safety at the heart of our decision making, we’ve worked with Virgin Orbit and Spaceport Cornwall to assess their applications and issue licences within our expected timeframe, putting the UK framework on a competitive footing with international space regulators. With all licences in place, Virgin Orbit and Spaceport Cornwall are now in a position to deliver a historic first orbital launch from UK shores. We’re proud to be playing our part in facilitating the UK’s space ambitions and enable this country to become a leading launch nation.”

Start Me Up will be the fifth consecutive Virgin Orbit launch to carry payloads for both private companies and government agencies. All of the prior 33 satellites were carried by LauncherOne to their precise desired orbit, while demonstrating the ability to fly through and above inclement weather, integrate rapid-call up payloads, and reach a broader range of orbits than would be possible from a traditional ground-launch system.

The missions of the satellites span a wide range of activities aimed at improving life on Earth, including reducing the environmental impact of production; preventing illegal trafficking, smuggling, and terrorism; and a host of national security functions.

Virgin Orbit’s LauncherOne rockets are designed and manufactured in Long Beach, California, and are air-launched from the wing of a converted Boeing 747-400 aircraft named ‘Cosmic Girl’. Virgin Orbit’s unique air-launch platform can take off from any runway long enough to handle a Boeing 747. Not reliant on traditional spaceports that support vertical launches, this capability creates a new level of mobility for satellite launch, thereby enabling sovereign launch capability in new markets.