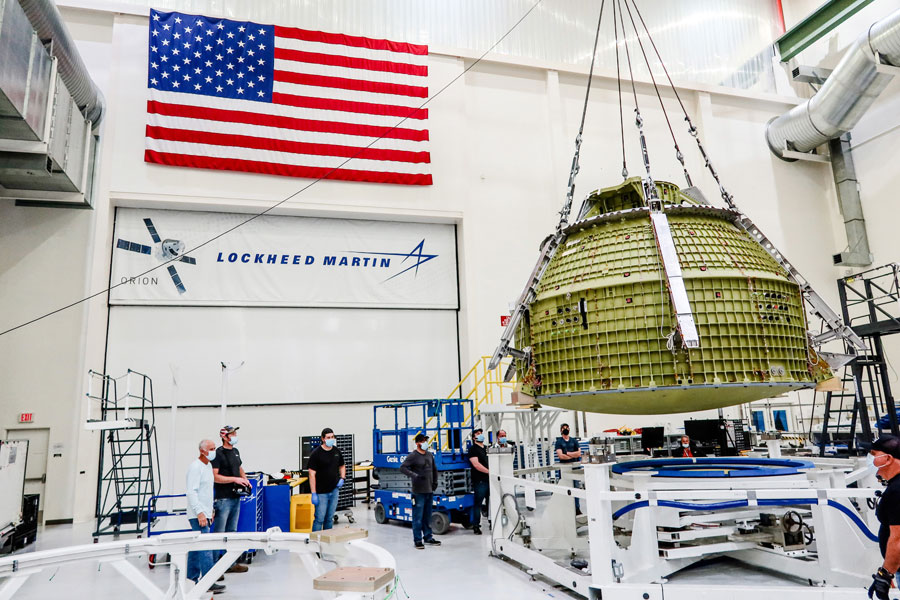 Press Release, Denver, 20 October 2022: Lockheed Martin is now under contract to deliver three Orion spacecraft to NASA for its Artemis VI-VIII missions, continuing the delivery of exploration vehicles to the agency to carry astronauts into deep space and around the Moon supporting the Artemis programme.

The Orion crew module pressure vessel for the Artemis III mission – the first vehicle under the Lockheed Martin OPOC contract – is undergoing assembly at NASA’s Kennedy Space Center. Lockheed Martin is the prime contractor to NASA for the Orion programme and has completed two Orion vehicles – EFT-1 which flew in 2014, and Artemis I, which is weeks away from its launch to the Moon – and is actively building vehicles for the Artemis II-V missions.

“Lockheed Martin is honoured to partner with NASA to deliver Orion spacecraft for NASA’s Artemis missions. This order includes spacecraft, mission planning and support, and takes us into the 2030s,” said Lisa Callahan, vice president and general manager for Commercial Civil Space, Lockheed Martin. “We’re on the eve of a historic launch kicking off the Artemis era and this contract shows NASA is making long-term plans toward living and working on the Moon, while also having a forward focus on getting humans to Mars.”

This order marks the second three missions under the agency’s Orion Production and Operations Contract (OPOC), an indefinite-delivery, indefinite-quantity (IDIQ) contract for up to 12 vehicles. A breakout of these orders includes:

Under OPOC, Lockheed Martin and NASA have reduced the costs on Orion by 50% per vehicle on Artemis III through Artemis V, compared to vehicles built during the design and development phase. The vehicles built for Artemis VI, VII and VIII will see an additional 30% cost reduction.

“We’re achieving substantial cost savings from Artemis III through Artemis VIII by extensive structure and system reuse and incorporating advanced digital design and manufacturing processes,” said Tonya Ladwig, Orion vice president and programme manager at Lockheed Martin Space. “The Artemis II vehicle will reuse select avionics from the Artemis I crew module, and that reuse will continue to dramatically increase to where the Artemis III pressure vessel capsule will be entirely refurbished for the Artemis VI mission.”

Additionally, the company will drive out cost from these production vehicles through material and component bulk buys from suppliers and an accelerated mission cadence.

With the Artemis I Orion spacecraft currently on top of the Space Launch System rocket, there are two other Orion vehicles undergoing assembly at NASA’s Kennedy Space Center in Florida, Artemis II and III. Work is well under way on the Artemis IV craft including welding the pressure vessel together at NASA’s Michoud Assembly Facility near New Orleans and the heat shield at Lockheed Martin’s facility near Denver, and work has already begun on the Artemis V vehicle.