Orion With The Airbus-built ESM Ready For Launch 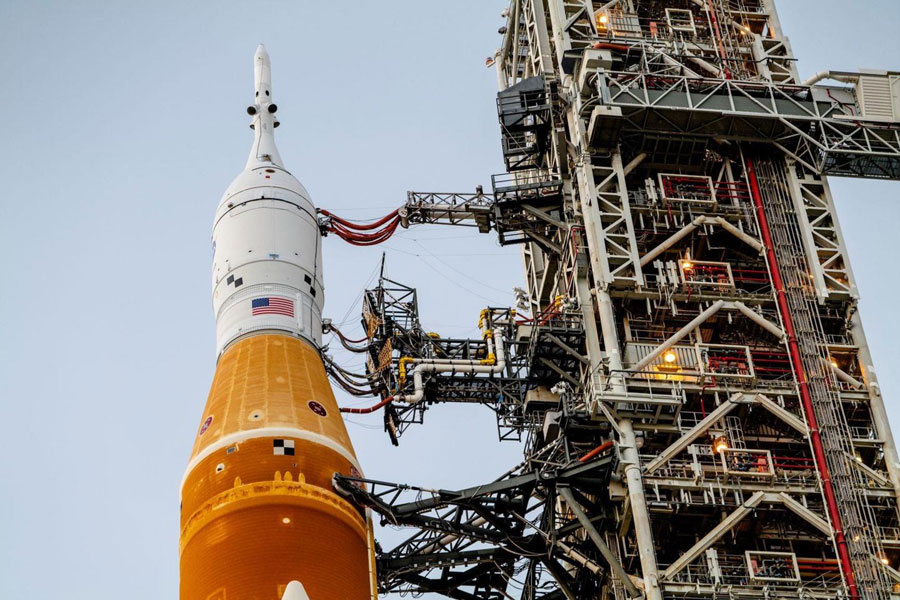 Fly me to the Moon! NASA’s Orion spacecraft with the Airbus-built ESM (European Service Module) is ready for launch from Cape Canaveral.

Press Release, Bremen / Cape Canaveral, 23 August 2022: NASA’s Orion spacecraft will be launched in a few days from Kennedy Space Center in Florida, USA, on its mission to the Moon. The Airbus-built European Service Module (ESM) will power Orion to and from its lunar orbit as part of NASA’s Artemis missions. Airbus has developed the ESM as prime contractor for the European Space Agency ESA and is designing and manufacturing a further five ESMs.

The ESM is a key element of Orion, the next-generation spacecraft that will carry astronauts beyond low Earth orbit for the first time since the Apollo programme ended in the 1970s. The module provides propulsion, power and thermal regulation and will supply astronauts with water and oxygen on future missions. The ESM is installed below the crew module. Together, the two make up the Orion spacecraft.

“The launch of NASA’s Orion spacecraft with the European Service Module has historic significance 50 years after the last astronaut lunar mission and is another major step toward returning astronauts to the Moon. The programme is now moving forward and we are ready for a return to the lunar surface in 2025 together with our customers ESA and NASA and our industrial partner Lockheed Martin Space,” said Jean-Marc Nasr, head of Space Systems at Airbus.

The launch of the first Orion spacecraft using NASA’s new ‘Space-Launch System’ rocket will be crew-less and will take Orion more than 70,000 kilometres beyond the Moon to demonstrate its capabilities. Artemis II, planned for around 2024 and powered by the ESM-2, will carry four astronauts to space and return them safely to Earth. Then, a year later, the ESM-3 will ensure that another Orion capsule safely carries the first woman to the Moon. The technologies developed and experience collected during the Artemis Missions will be fundamental for possible future long-term missions to Mars, for example.

The ESM consists of more than 20,000 parts and components, from electrical equipment to thrusters, solar arrays, propellant tanks, life support materials and several kilometres of cables and hoses. The ESM is a cylinder about four metres high and wide. It is similar to the European Automated Transfer Vehicle (ATV 2008 – 2015), also built by Airbus, and features the signature four-bladed solar array (19 metres in diameter when deployed), which generates enough power for two households. The service module’s 8.6 tons of propellant power the main engine, eight auxiliary engines and 24 smaller thrusters ensure navigation and attitude control.

At launch, the ESM weighs a total of just over 13 tons. In addition to serving as the main propulsion system for the Orion spacecraft, the ESM will enable orbital manoeuvring and attitude control. It will provide the crew with key life support elements such as water and oxygen and regulate thermal control while docked to the crew module. Also the unpressurised service module can be used to carry additional payloads.

For the first landing on the Moon, the Orion spacecraft will dock with the international Lunar Gateway – a lunar-orbiting platform that will enable sustained space exploration and expand humanity’s presence in space.