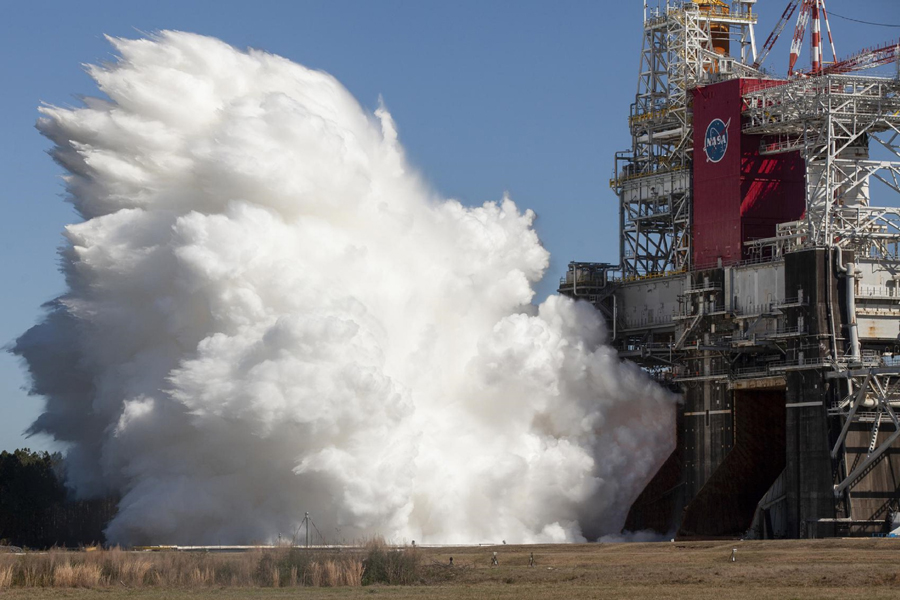 Boeing and NASA last night announced completion of the hot fire test of the Space Launch System Core Stage for the Artemis I programme.

“Deep space exploration took an important step forward today,” said John Shannon, SLS vice president and program manager for Boeing. “The advancements made on the all-new SLS core stage are positive for NASA and the national supply chain. The team is using knowledge gained from Green Run to move forward on our new production system and future stages while delivering the first stage for test flight.”

The Boeing-built SLS core stage is fuelled by liquid hydrogen and oxygen tanks feeding four RS-25 engines built by Aerojet Rocketdyne, together producing 1.6 million pounds of thrust during the test and at launch. During a mission, the stage’s engines produce 2.2 million pounds of thrust. The engines burned for a full duration of 499.6 seconds, or eight minutes and 19 seconds, during the test, providing critical verification data.

After post-test checkouts, the core stage will go to NASA’s Kennedy Space Center in Florida for integration with the Orion crew spacecraft, Interim Cryogenic Propulsion Stage upper stage, and solid rocket boosters, and then be prepared for launch. That complete vehicle will fly the first mission of NASA’s Artemis programme, called Artemis I, which will be an uncrewed test flight of Orion around the moon to prepare for crewed missions. Only the SLS has the power to launch Orion, crew and cargo to the moon and enable sustainable lunar exploration. Boeing is the prime contractor to NASA for the SLS core and upper stages and avionics.

“I want to thank our NASA, Aerojet Rocketdyne, and Boeing teams that overcame storms and a pandemic to prove out the SLS core stage’s capability and safety,” said Shannon.

The SLS will continue to evolve past Artemis III, which is planned to be the landing of the first woman and next man on the moon. Boeing is already working on evolvable capabilities for the rocket system such as the Exploration Upper Stage, with additional power that will be key for meaningful human exploration of the moon and Mars.