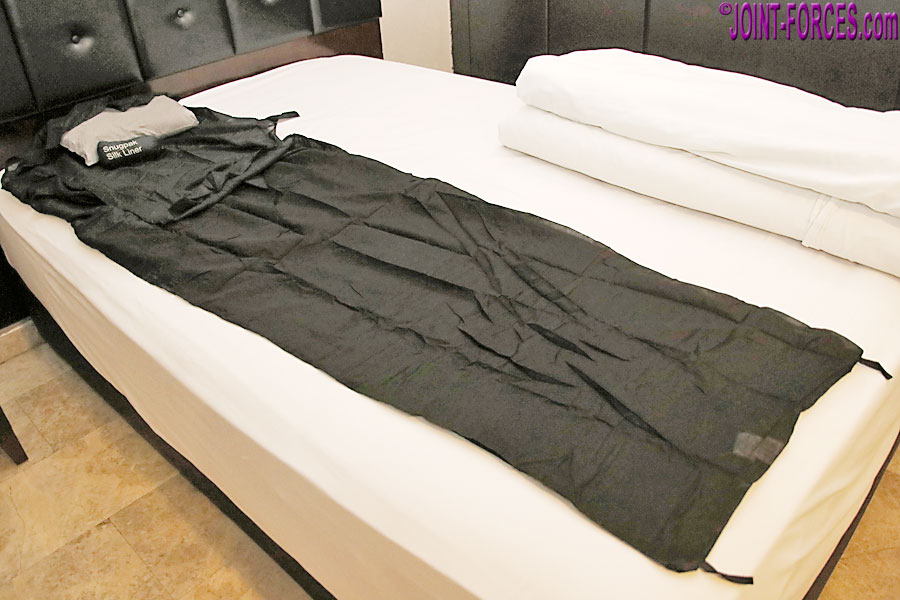 The Silk Mix Liner from Snugpak is a lightweight and compact travel accessory which doubles as a hot climate sleeping bag, writes Bob Morrison.

For almost the last twenty years I have carried an original Snugpak Silk Liner on pretty much every assignment which involved at least one night away from home, even though more often than not I’d be sleeping in a proper bed rather kipping in a green maggot; so-called because that is what a squaddie looked like when inside the old olive coloured British Army issue sleeping bag.

Most readers probably know that using a lightweight liner gives an additional layer of warmth to a sleeping bag, as well as preventing the inside from getting mucky, but I wonder how many realise that because silk is a poor heat conductor one’s body warmth will be retained if there is a reasonable percentage of this natural material in the mix. Also if the climate outside is very warm and humid, sleeping under silk can give the feeling of being cooler than if under nylon or even cotton. Whether or not the science bears this out I don’t know, but back in those days when I quite regularly went to sleep on photo assignments on a hot desert night only to wake up on a cold desert morning I was always quite comfortable in my original 100% silk liner while those around me invariably said they fell asleep overly warm and woke up chilly (sometimes having to reach for an extra layer an hour or so before first light when the thermometer invariably seems to plunge). Conversely, when drifting off to sleep in the Arctic or Baltic regions I have always found my ageing but still practical silk liner to be a really snug (no pun intended) comfort layer.

When I first obtained my original Snugpak liner China was in the process of adapting fast to Western style commercialism and pure silk was still comparatively cheap on this side of the globe (indeed I also have a well-travelled pure silk aircrew survival shirt manufactured by Arktis from that same era) but these days are long gone and today producing utility items from 100% silk is too costly. The current Silk Mix Liner marketed by Snugpak uses a 30/70% blend of silk and cotton and to check if this comparatively inexpensive item still cuts the mustard as a hot weather sleeping bag I took one out to Aqaba last month. Being at the head of the Red Sea this Jordanian city is needless to say quite humid and as the thermometer was only a few degrees under body temperature when I clambered into the sack each night (I hate air-con and sleep with the windows open) it was way too warm to sleep under the heavy duvet provided by the hotel; though locals I was in contact with had taken to wearing their winter coats in the early mornings as they thought it was cold and were amazed that I was bimbling about on early November mornings in just a short-sleeved shirt!

Being a bit of a ‘belt and braces’ type, I took my original Silk Liner out to Jordan as well as my new Silk Mix Liner, just in case the latter was not quite up to the job, but I need not have worried as I slept comfortably in the new bag every night. The new kid on the block also works well in the cold as an additional warm layer, as the currently plunging thermometer has already proved, and I even took it with me when sleeping in several strange beds on the Continent and in the UK this December because I do like my creature comforts as well as hating air-con heating.

For the technically-minded, the Silk Mix Liner weighs just 140g and packs down to only 150mm long by 75mm diameter in its stuff sack; though the first few times getting it all back into the bag can be a bit like trying to fit a condom on an elephant, but once the technique is mastered it gets much easier. When unfurled the liner measures 2100mm (83”) long by roughly 750mm (30”) wide at the chest and 500mm (20”) at the foot. The material of this coffin-shaped cocoon, which is open at the upper left side, extends under the head at the back and there is a hook and loop fastener to gather the material in over the shoulder. There are hanging loops at the bottom for airing when not in use.

So far my new Snugpak Silk Mix Liner is living up to expectations and I just hope I’m around long enough to get another two decades of service out of this one. Incidentally, the travel pillow in the photos from Jordan is my Snugpak Snuggy, which has also seen plenty of use over the years.