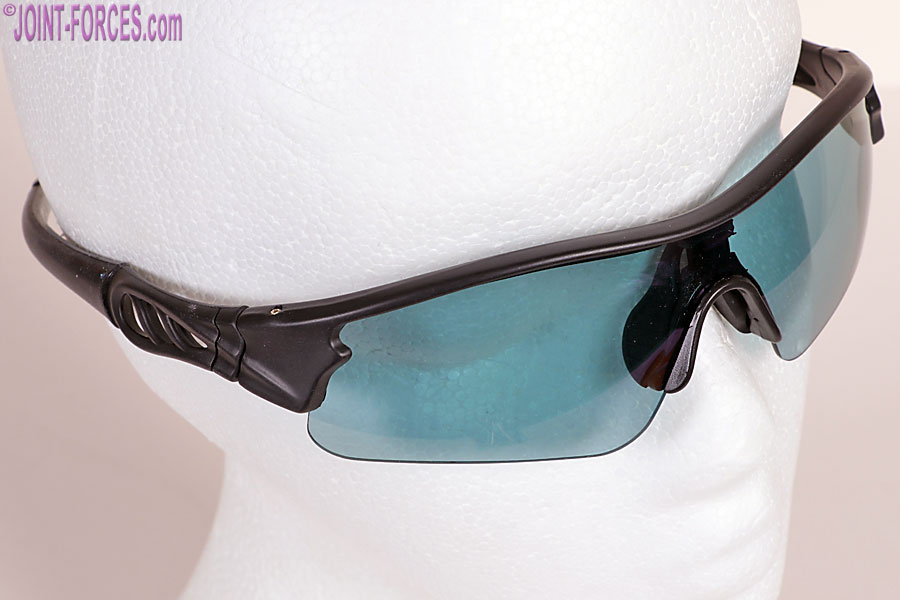 Following a twelve month development programme WOOSUNG SITEK, which since 2005 had already supplied hundreds of thousands of pairs of both dust / wind protection goggles and pilot sunglasses to the Korean Armed Forces, began supplying JEFF FALCON ballistic eyepro to the military and to date has supplied well over a million pairs. In November we visited the company display stand at SOFEX 2023 in Aqaba, where they were exhibiting their JEFF EAGLE ballistic spectacles for Special Operations users and JEFF WRAITH I ballistic combat goggles alongside their flagship JEFF FALCON combat spectacle model.

Fully compliant with ANSI-Z87.1-2015 requirements and exceeding the US military eyewear resistance requirement MIL-PRF-31013 clause 3.5.1.1, the WOOSUN JEFF FALCON ballistic combat spectacles [Model No. WS-MIL-SG-001] use UV-protecting polycarbonate lenses in flexible TR-90 frames with an interchangeable silicon nose pad. Frame width and height is 156x45mm with a 24mm bridge width for the universal (i.e. Asian and European fit) silicone nose pad, lens thickness is 2.8mm, and weight is just 33g or 1.2oz. A pop-in Rx Carrier is available for those, like myself, who need corrective lenses but the design of these spectacles and nose pad is such that I find I can actually wear them on top of my prescription spectacles if I use the removable retaining strap to hold them in place; very handy, as using an Rx carrier inside wraparound eyepro is not really ideal when one needs a very thick lens to correct old injury damage and astigmatism.

Up to four standard lenses ~ Smoke Grey / Amber / Yellow / Clear ~ are provided for use in different light conditions and the FALCON model is also available with Black, Tan, Green Camo or Sand Camo coloured frame options. The standard issue kit includes a fabric carrying case with foam padding, an adjustable elastic retaining strap, and a heavy duty cleaning cloth. The zipped case has two PALS (Pouch Attachment Ladder System) or MOLLE tapes with press studs on the rear face and a nylon hanging clip with swivel. There is also a name tag holder on the side face.

On my latest trip to sunny Jordan, unlike during my KASOTC assignment last June when I had to wear ballistic eye protection out on a couple of the firing ranges and when photographing inside the Airbus being taken down by SOF aircraft assault teams, I only needed to wear conventional sunglasses when outside the expo halls. However after the WOOSUN representative gave me a pair of JEFF FALCON combat spectacles to review I wore these over the top of my ordinary spectacles whenever out on the sand-blown airfield. I found this eyepro to be very comfortable at the time, and once back home I tried them out with my Batlskin helmet and hearing protection to check they were fully compatible and had no issues.

My overall impression, after wearing these ballistic spectacles for close on two months now on those occasions when sunglasses were needed, is very favourable and I have stowed them in a daysack side pouch for forthcoming assignments. If all goes to plan their next outing to the Arab World, where protection against sun and sand is always useful, is likely to be next month.