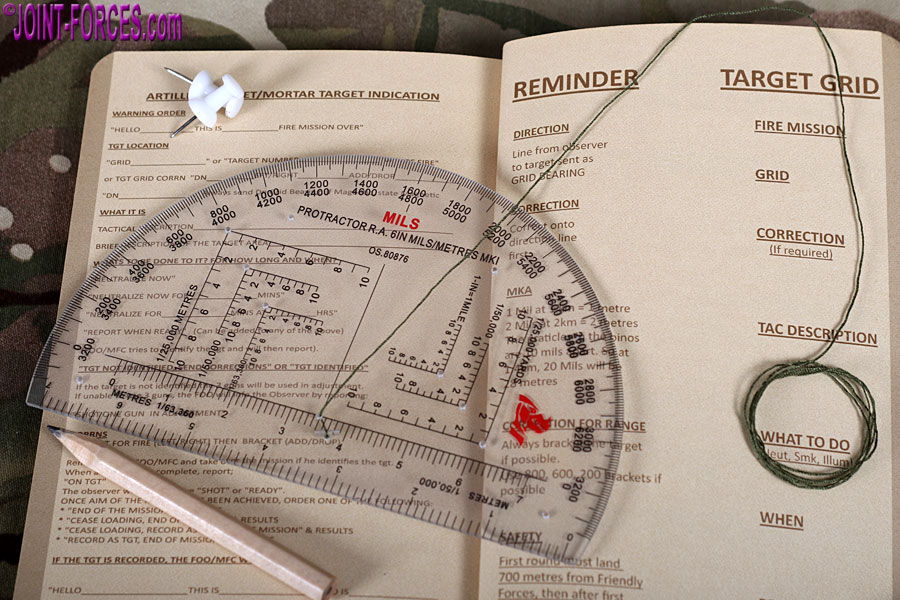 Fed up with wholesalers running out of 6” Protractors when he needed to restock smallish quantities, Gary at Colchester’s Dragon Supplies decided to bulk buy stocks of the classic Royal Artillery MILS / METRES Mk.1 type version marked with his company logo in red.

The primary purpose of this type of protractor, marked in mils (milliradians) rather than degrees, is to allow accurate laying of artillery and fall of shot. In addition to gunners, snipers / observers and JTACs / FACs etc. who regularly need a protractor marked in mils, this simple transparent plastic measuring instrument is likely to come in handy for other officers and NCOs who may occasionally require a non-digital backup when calculating precise positions using a map and compass. It can also come in useful for accurate navigating when trekking in the great outdoors if your compass is marked in mils, as is common for many military prismatic (or Engineer’s) compasses.

In addition to a 3,200 mils arc (there are 6,400 mils in a full circle*) divided every 10mils for both bearings and back bearings, this perspex semicircle has both 1:50,000 and 1:63,360 ( i.e. one inch to the mile) map scales with 100-metre markings as well as both metres and yards Romers** for the three most common map scales. Pinholes are drilled at the mid-radius point for a plumb line (to accurately measure a grid bearing) with a satellite hole for securing the hole, and for each of the six Romers, plus there are four more holes for pinning the protractor to or recording its position on the map (if it is tactically safe to mark the map – use a mechanical or clutch pencil with easily erasable soft lead if it is unsafe). To ensure they are easily visible, in the bottom image I have marked three of these pinholes with a blue symbol plus the satellite securing hole for the plumb line with a lime green symbol. A short coil of green cotton thread is supplied with the protractor for use as the plumb line; to allow this line to be pulled taut without the need to knot it, I have tied one end to a tiny polythene section clipped out of a clothing tag.

Measuring 6×3.75” or 152x95mm, this thin (roughly 2mm) perspex aid will take up next to no space in pouch or map case. It can also be easily slipped inside an all-weather field book or a slightly shorter all-weather spiral notebook, and secured with a rubber band or two.

To purchase online go to Dragon-6-Inch-Protractor on DragonSupplies.co.uk. Individual cost is £9.99 inc VAT, plus P&P, but call Gary on 01206 854 354 if looking to purchase in bulk for your unit.

* One millirad is one thousandth of a radian. The circumference of a circle is 2 π or twice its radius multiplied by π (3.14159). This equates to 6, 283.18 milliradians in one full turn. NATO approximates and simplifies this to 6,400 mils in a circle and nations still following the former Warsaw Pact designation use the less accurate figure of 6,000 milliradians in a circle.

** A Romer (name after the WWI artillery officer and Military Medal holder who invented the system) consists of two scale lines at 90° to each other on a transparent compass baseplate or protractor divided to allow accurate 6-figure grid references to be speedily calculated on a map.