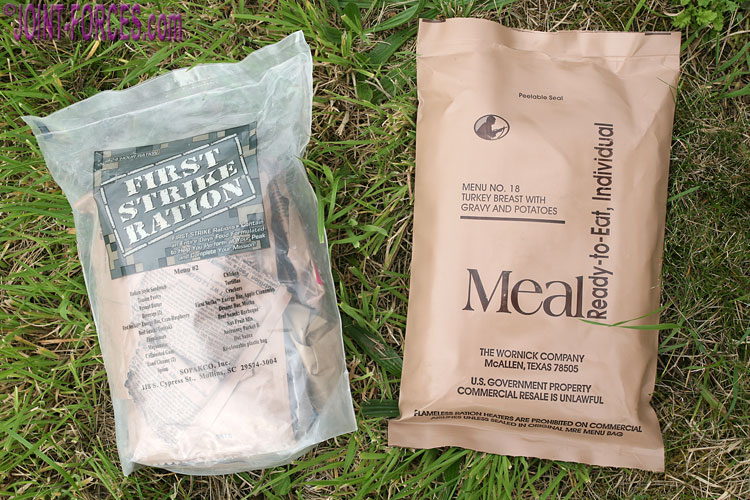 In this Field Rations article, to preserve the time-line, we are temporarily breaking the MRE series to look at the US First Strike Ration issued around 2010/11, writes Bob Morrison.

The First Strike Ration or FSR is intended to provide full nutrition for a 24-hour period but, unlike the Meal Ready to Eat or MRE and many other similar combat rations, it is not supplied on a conventional three individual meals a day basis. Introduced in basic three Menu format in 2007 and expanded to nine Menus from 2011, the original FSR was primarily issued to US troops serving in forward operational areas of Afghanistan including Helmand Province.

In the words of an official US military guide on the topic: “The FSR is a compact, eat-on-the-move assault ration designed for short durations of highly mobile, high intensity combat operations. The FSR is substantially reduced in weight and cube and enhances warfighter consumption, nutritional intake, and mobility.”

In response to the logical question of why is it needed when the Americans already have the proven MRE, the US DoD stated that the ration pack was designed to improve tactical mobility and to meet the manoeuvre sustainment needs of the warfighter during first to fight and high intensity conflicts. The communiqué went on to explain that the FSR “takes advantage of major advancements in food processing, preservation, nutrient delivery, and packaging technologies to include innovative methods in intermediate moisture foods, glucose optimisation, and novel packaging materials and configurations.”

Enhanced mobility was one of the key features as all components of this lightweight ration were familiar, eat-out-of-hand foods that required little or no preparation; in 2007 US Department of Defense Combat Feeding programme integrator Kathy-Lynn Evangelos is quoted as calling the new pack an “assault ration” and this unofficial name stuck. As it was recognised that frontline troops often stripped back MREs to the bare minimum to reduce the weight burden, resulting in some nutritional deficiencies as all edible components needed to be consumed to maintain a balanced diet, this lighter weight solution which also did not require to be heated to derive maximum benefit was seen as a positive solution to a complex problem.

Confirming this, in November 2009 Andy Young, chief of the Military Nutrition Division at the US Army Institute of Environmental Medicine, was quoted as saying: “Before [FSR] introduction, service members who were outside of a Forward Operating Base for two to seven days were given MREs to travel with. Because of space limitations, soldiers would field-strip the meal and throw away more than half of the food, including a large portion of nutrients.”

It is a simple fact that nutrition is only nutrition if it is actually consumed, so the FSR was specifically designed to ensure the soldier threw nothing away when attempting to reduce carried weight and bulk. Young continued: “The First Strike Ration provides all the components that can be easily eaten on the move. And we now can regain control, if you will, of nutrition and make sure that those warfighters are getting the nutrients that they so desperately need to maintain [or] enhance both cognitive and physical performance.”

One benefit incorporated in the FSR was innovative packaging technologies which enabled the dried specialist sports-type beverages in the new ration to be reconstituted and consumed directly from the (bottle shaped) drink pouch meaning little time was lost in preparation so therefore it was more likely they would be drunk rather than discarded and the nutrients in them would be taken. Other key benefits included a minimum two year ration shelf life at 27C (80F) and provision of an average of 2900 calories per day in a pack size which was roughly half the volume and mass of one day’s issue of three MRE rations.

Developed and trialled extensively in the early part of the decade, tested both by troops undertaking training at major establishments and operationally deployed troops in Iraq and Afghanistan, the FSR concept was initially signed off for issue to frontline troops from 2007. When we taste tested it in late 2010 the ration packs being issued in Helmand came packed nine meals to the carton and provided three soldiers with a different menu each day for three days, but a continuous product improvement programme based on user feedback promised future expansion to nine different menus and this was approved under the second major procurement contract placed in 2009.

Carl Schulze, our Senior Correspondent, consumed his fair share of First Strike Rations when embedded with 1st Light Armoured Recon of the US Marine Corps on patrol in Helmand Province in the summer of 2010 and at the time he also sent an example back to allow me to conduct my own taste test and undertake detailed photography. We have to say, both of us having lived off MREs in the field many times over much of the last three decades, that we were pleasantly surprised by the FSR which is much less bland than the much-decried MRE or ‘Meals Rejected by Ethiopians’.

The example featured here is first contract batch Menu 2, which many considered to be the best of the three originals due to its varied contents that were acceptable to just about everyone, though with just three Menu choices at that time the FSR made no major provision for those with special dietary needs.

First Strike bars, opened example is Apple-Cinnamon, were sweet and quite waxy [©BM]

The early FSR, which provided an average of 2900 calories to get the soldier through one day in the field, was supplied in a tough translucent polythene bag with a printed label and menu details on one side. With the exception of the accessory pack, which varied slightly between menus and was enclosed in its own polythene bag, everything was loose packed and there was no major excess protective packaging such as the cardboard cartons in MREs which encase meal pouches. Inside each FSR there was also a sand coloured resealable zip-lock pouch which was more tactical than the outer but which would be much less able to stand the rigours of handling down the supply chain if the ration was issued in that alone.

The components, with the exception of the separate plastic spoon included in every FSR, were mostly all packed in tough sand coloured pouches of the type found in MREs with printed info on one side, though the odd commercial product (such as the Chicken in Menu 2) in brightly coloured civilian packaging jarred slightly on the eye. In bulk, the FSR was dimensionally similar to an MRE but thicker and when removed from the outer packaging all components could be crammed into a large PALS (i.e. MOLLE-compatible) pouch or, at a struggle, a large combat jacket pocket. With the exception of water, taken from the soldier’s personal bottle or hydration pack, used to reconstitute the sports drinks or for the single ‘brew’ sachet included, everything needed for one day’s sustenance was contained in this single pack.

Breaking down the components: the primary ‘breakfast’ item was a toast pocket, a toaster pastry or good ol’ pound cake; the primary ‘lunch’ item was a pocket sandwich; and the primary ‘dinner’ item was either a second pocket sandwich or a pouch of chicken or tuna (which could be rolled in tortillas or just spooned out of the pouch with fat-free mayonnaise and/or Tabasco sauce to taste). Secondary components were two First Strike energy bars (formerly Hooah Bars and available on the US civvy market as Soldier Fuel) and a dessert-sized energy bar.

Each pack also contained wheat snack bread or crackers, with cheese spread or peanut butter, a pouch of mixed fruit and nuts with sunflower seeds and two beef jerky bars in BBQ or Teriyaki flavour. There were two ERGO energy drinks in shaped zip-lock drink pouches which needed to be reconstituted with drinking water, a pouch of CHO-enhanced apple sauce and a pack of commercial caffeinated chewing gum. Salt, sugar, matches, tooth-cleaning gum, toilet tissue and three moist cleansing towelettes were included in the accessory pack along with a sachet of either lemon tea, coffee or cider powder.

The toaster pastry found in Menu 2 was actually just a commercial Pop-Tart in its civvy wrapper packaged in a military outer pouch and the beef jerky or beef snack sticks were also proprietary products in civvy wrappers inside sand pouches. The easiest way of describing the pocket sandwich to our British readers is to liken it to a Ginsters chicken or beef slice, of the type found in most filling stations, but drier with a less flaky and more bread-like pastry outer. The tortillas were just plain round tortillas, possibly a bit sweeter than one would find on this side of The Pond, which could be nibbled on their own, spread with peanut butter, or used to roll up the chicken or tuna, seasoned to personal taste, in the Mexican fashion. The First Strike bars, which I found to be quite tasty, were very sweet and rather waxy confectionery bars crammed full of additives to give the soldier an energy boost.

Overall my impression was that the FSR was much less bland than the MRE, was ideal for snacking on the move rather than sit-down eating, and on the whole it was filling and tasty. Everything was, of course, heavily treated to keep it tasting good for at least a couple of years of storage in a hot environment, but one did not get that MRE feeling that prolonged consumption might leave you glowing in the dark. They got my vote. Over to Carl now for his opinion… “The First Strike Ration was designed for people that are constantly on the move. In southern Afghanistan I had the opportunity to check out if they were fulfilling this task and my judgement was: Yes.

“The ration pack was basically a large collection of snacks and its components ideally fit into pockets – I just placed them in the pockets of my body armour. When I got hungry during patrols I could just take items out and have a bite.

“Regarding the taste, if you like the US MREs you will also like the First Strike Ration. I think the sandwich and toast items taste similar to some of those snack pizza things you can get at fuel stations.”