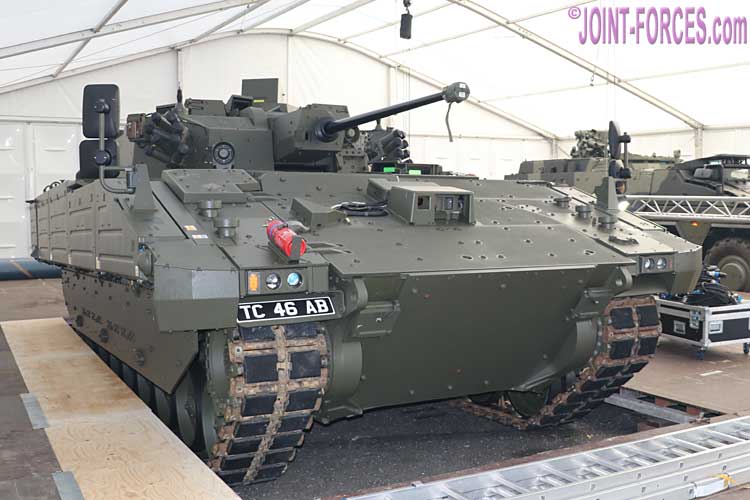 All the way back to the DSEI 2017 expo in London, almost four years ago now, there have been persistent rumours circulating that the British Army’s long-running AJAX recce vehicle programme had serious issues. It therefore came as no great surprise that not only had the vehicle failed to meet its delayed IOC (Initial Operating Capability) date of 30th June 2021 – i.e. last month – but also that an external test team at Millbrook Proving Ground had been commissioned at taxpayer expense to investigate health-damaging noise and vibration problems with user trials vehicles.

Until yesterday specialist defence journalists who went to press with stories about the serious problems afflicting this long overdue and grossly overweight tracked recce vehicle (which despite its size and looks is not an Infantry Fighting Vehicle and is not a WARRIOR MIFV substitute) were unjustly accused of spreading bovine scatteration. However even the manufacturer has now admitted that noise and vibration problems with the vehicle have been known about for over a decade, though it was only after serving soldiers rather than company employees started trialling the vehicles in the summer of 2020 that reports of serious hearing damage and heath problems associated with excessive vibration surfaced (eventually resulting in the Minister for Defence Procurement being informed for the first time on 13th November 2020).

In addition to yesterday afternoon watching online the two hour-long back-to-back Defence Committee oral evidence sessions – first with two representatives from the manufacturer GDELS-UK, then with the Ministry of Defence and the British Army – last night I also watched all two hours again to make sure I really had heard what I thought I had and to ensure I had not missed anything. It was compulsive viewing which did nothing whatsoever to alter my views that AJAX is becoming the British Army’s equivalent of the disastrous RAF NIMROD MRA4* programme and that the UK’s defence procurement system in not only sloth-like and in some areas not fit for purpose, but that it is probably Teflon-coated as well.

Should you wish to view or listen to the witness sessions for yourself on Parliament Live, try clicking on this link: AJAX: Recent Developments. In my opinion they make for interesting listening and some serious questions need to be asked about how well over £3 billion of taxpayers’ cash has already been spent on a much-needed and long overdue defence asset with so little to show for it other than: a few delivered vehicles which cannot be driven at high speed or accurately fired on the move; warehouses full of already manufactured foreign-built hulls which will most likely need to be expensively modified once the design has matured; and a number of soldiers with injuries suffered while trialling a military vehicle which has major problems.

*The RAF NIMROD MRA4 aircraft was ordered in 1996 and was intended to enter service in 2003 but the overdue and over-budget programme was eventually cancelled in 2010 after £3.4 billion had been wasted upon it without it even having reached Initial Operating Capability.

Footnote: Although I have seen and photographed static AJAX, and some other family variants, on the manufacturer’s stands at the DSEI, DVD and IAV defence expos, and once briefly at a Combined Arms Manoeuvre Display on Salisbury Plain (before it was spirited away again under tarpaulins on a low-loader to Bovington) I have not been invited to any of the limited number of demonstrations of the vehicle by either the manufacturer or the Ministry of Defence where one has actually been moving. Might the current MoD policy of keeping journalists with a little bit of knowledge at arms length, preferring instead to internally generate spin and propaganda, be rooted in the fear that some of us might point out when the emperor is not dressed in new finery and indeed is actually not wearing clothes at all… or am I just being a cynical old hack?

Postscript: The new US Army Ground Mobility Vehicle (AGMV) is a derivative of the aptly named GD Flyer and based on this it seems logical that we should refer to the vibration-prone AJAX as the GD Shaker.