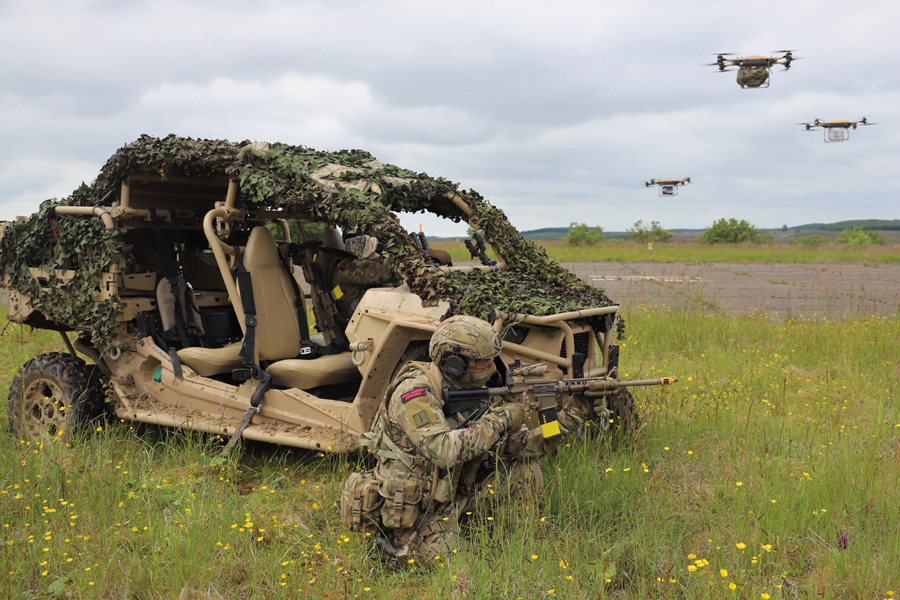 Royal Marines of 40 Commando using a Malloy TRV150 to deliver supplies onto the battlefield during the Autonomous Advance Force 4.0 exercises at RAF Spadeadam [Crown Copyright]

Drones dived, sailed and flew together in a swarm in a first for the UK’s armed forces during experimental exercises with the Royal Marines.

Drones dived, sailed and flew together in a swarm in a first for the UK’s armed forces during experimental exercises with the Royal Marines. An array of autonomous systems operated underwater, on the water, in the sky and over land to help Royal Marines Commandos as they carried out training raids on a number of complex ‘adversary’ positions – such as missile and radar installations – in Cumbria and Dorset.

The uncrewed systems were used on missions at the Electronic Warfare Tactics facility at RAF Spadeadam on the border with Northumberland and off the south coast in training areas around Lulworth Cove and the Defence BattleLab.

In a first for UK Defence a group of six medium-heavy lift drones were operated in one autonomously controlled swarm from a single ground control station. The drones were tasked with tactically re-supplying commandos with everything from ammunition for the assaulting troops, through to blood for combat medics. The swarm also demonstrated significant flexibility and switched roles to conduct reconnaissance missions to provide intelligence for commando raids ashore and at sea against a hostile target, when launched from RFA Mounts Bay. The autonomous systems also worked together, being tasked independently to find and identify enemy targets, accurately using their range of increasingly powerful sensors and target acquisition algorithms.

The trials – named AUTONOMOUS ADVANCE FORCE 4.0 – are the latest in a series of experimental exercises that have developed ways in which the UK Commando Force will operate in the future, putting an emphasis on human and machines teaming closely together to gain a battlefield advantage. The ultimate aim is to seamlessly embed autonomous systems on the front line to support commando forces on the battlefield. These experiments scrutinise tactics and develop knowledge of how the drones can and cannot be used.

First Sea Lord, Admiral Sir Tony Radakin, said: “Only by continued experimentation with the latest technology and innovation can we properly prepare our people for the challenges of the future.

“AUTONOMOUS ADVANCE FORCE 4.0 is testing just how hybrid forces can operate on the battlefield, with elite Royal Marine Commandos enhancing their capabilities with the use of drone swarms.”

Colonel Chris Haw, the officer in charge of the experiments, said: “This has been yet another enormously important step forward in Royal Navy autonomy and particularly Commando Force transformation; I have seen phenomenal progress through this series of trials over the past two years.

Commandos experiment with autonomous systems: Royal Marines strike teams from Alpha Company, of Taunton-based 40 Commando, were on the ground and able to call on swarms of Malloy TRV150 drones – which can lift up to 68kg in all weathers – for deliveries of ammunition, blood and other supplies.

The commandos carried a small rugged tablet on their chest giving the ability to tap a map location and time for the delivery of their supplies, leaving the Malloys to do the rest and drop in what they need when they need it.

A mini-helicopter called the Anduril Ghost drone – which flies almost silently and is equipped with advanced sensors – gave the commandos a live feed of what lay ahead. The Ghost is very difficult to detect, can fly autonomously, accurately identify targets and has a long endurance. It can work in a swarm with other Ghost drones – capturing thermal images and footage – and can be tasked with finding numerous targets in coastal zone, be that a human on the land or a vessel at sea. The Ghost can also carry a payload, paving the way for forces to land ashore and conduct their mission without delay with the drone continuing to support in a variety roles, with a payload bespoke for the mission at hand.

Also plugging into this network were Remus underwater vehicles dropped into the sea by the Malloy TRV150s. Remus can scan the ocean for mines and obstructions using an array of sensors to feed valuable information back to the amphibious command and help make decisions on where marine forces can land ashore via a clear route. On the waves, the Royal Navy’s MADFOX vessel scanned the horizon using advanced sensors. The autonomous vessel can carry out reconnaissance operations and surveillance patrols, providing valuable information on a coastal area before Royal Marines get in their raiding craft to come ashore.

Adding to the already impressive range of autonomous systems, the commandos also had the fixed-wing Cobra drone flying overhead. The Cobra – which has a 3.1m wingspan and long endurance – can be launched from unprepared ground or from ship and is used for identifying and tracking targets. This drone can be carried in a backpack and has been engineered to function in harsh environments, ideal for following commandos into all extremes of climate.

Finally, the commandos carried out simulator and range training with the Tactical Precision Strike system – which is what’s known as a lethal loitering munition (essentially meaning it flies to the vicinity of a target, and waits until the human operator specifies it to attack).

The information fed through from all these autonomous sensors were brought together in an experimental communications network – known as an EVE network – which ultimately increases commandos’ situational awareness on the battlefield but also helps reduce the physical threats personnel face while on operations. Together, these autonomous sensors enable commandos to carry out find and strike missions, while also keeping them supplied and in the fight for longer.

During two weeks on AUTONOMOUS ADVANCE FORCE 4.0 the drones have been tested in a range of scenarios, adding to experiments completed in the Mediterranean and in the Arctic last year. The experiments have continually increased in complexity and have taken big leaps and will continue in the United States later this year on Exercise GREEN DAGGER in the Californian desert.