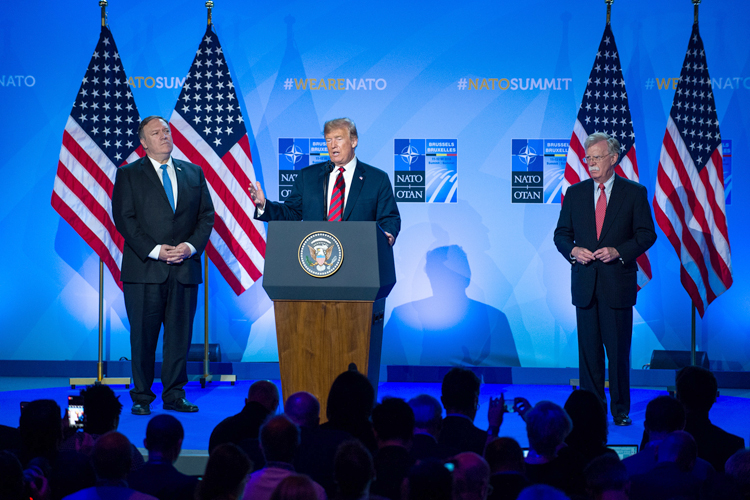 US President Trump, in Europe for the 2018 NATO Summit, asked the European members to increase their spending on defence and asked why Americans should spend more on NATO to defend European countries than those countries do themselves, writes Robert Shaw.

As well as asking for member states to up their defence spending, POTUS also voiced concerns over Germany being vulnerable to Russian pressure and influence as much of its energy supplies (gas) are bought from Russia. So why don’t all NATO members pay the required 2% and is NATO, which was set up in 1949 for collective defence against the Warsaw Pact in the Cold War, still relevant? Are European NATO countries vulnerable to Russian energy leverage?

In 2014 all NATO member states agreed to increase their defence spending to 2% of GDP by 2024. This is low in comparison to the US, which currently spends 3.5%. The only other NATO member states spending 2% on defence are Estonia, Greece, Latvia and the UK. This is in line with these countries’ perceived threats.

Estonia and Latvia are concerned with the threat from close neighbour Russia, Greece is concerned at the political situation in Turkey, and the UK increased its spending as it needed to update the strategic nuclear deterrent. Poland and France are close to spending the 2% but the other nations don’t spend as much because either they don’t perceive a threat or, simply, they cannot afford the money and will therefore play any threats down.

Although NATO has stated it expects more countries to increase defence spending this year, bringing the total to 8 out of 29, this won’t please the US who are by far the largest single contributor to the Alliance, both financially and by troop and equipment numbers. Although there is also an EU military force, it is small and cannot deploy on operations on a scale that NATO, which has a large US contingent, can and the EU force certainly wouldn’t be capable of stopping Russian forces should their President decide on further expansion.

Although the Cold War is over and the Warsaw Pact no longer exists there is still a threat from Russia, as we have seen with its takeover of parts of Ukraine. This is why NATO troops spend time rotating through the Baltic States and Poland to both deter a Russian invasion and to reassure those countries that NATO will defend them if required.

The only other Coalitions capable of deploying on a global scale are formed by those forces operating under UN mandates but, as we saw in the Balkans conflict and especially in Srebrenica, due to a hugely bureaucratic command system and internal politics, UN forces do not have the credibility to be an effective deterrent. Therefore, NATO forces are still very much required.

As for German vulnerability, Russia does export between 50% and 75% of Germany’s gas requirements but this represents less than 20% of Germany’s total energy needs. Therefore, due to a diversity of energy sources, the reality is that Germany isn’t really any more vulnerable to Russian influence and leverage than any other European nation.