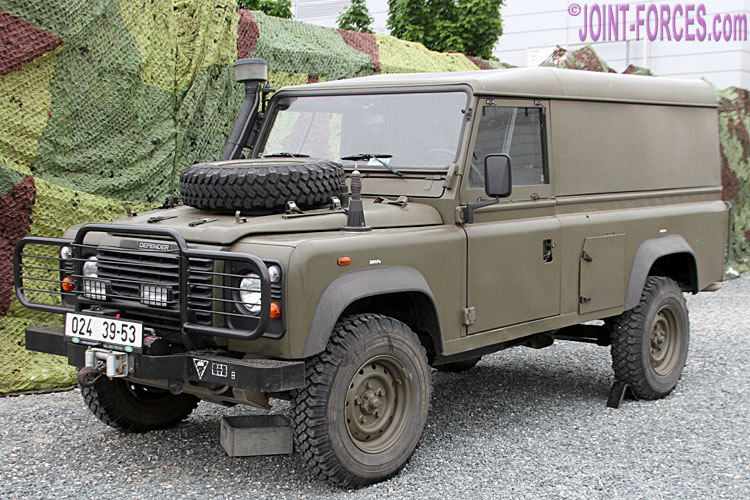 In this third part of my mini-series on Czech Army Defenders, fourth part if we include the D110 KAJMAN, I bring the story forward a decade to 2015, writes Bob Morrison.

Back in 2005, where I left off in my last article, the Czech Armed Forces were looking to buy more utility vehicles and several marques were present in the mobility display area at the IDEX defence expo in Brno. In addition to Defender 90 and Defender 110 company demonstrators plus in-service Czech Army Land Rovers, off-roaders displayed included the Russian UAZ-469, manufactured in Germany from CKD kits and marketed as the Baijah Taigah, the Polish Tarpan HONKER and the Spanish Santana PS-10 ANIBAL.

Land Rover, through their local representatives AMT Motor, won the following Czech military light utility vehicle contract and I would get the chance to photograph these newer Defender in 2015, first at the biennial IDET expo in May and a month later during the multinational NATO exercise NOBLE JUMP on the Zagan Training area in Poland. On both occasions I was able to photograph 2006 Model Year (MY) Defender 110 Hard Tops from the same batch and at the IDET 15 expo I also managed to photograph a pair of earlier 2000 MY Defender 110 Station Wagons, as well as what appeared to be a younger sibling which I suspect may have been to 2006 MY build specification.

Looking first at the 2006 Hard Top, the vehicle in the lead image and pictured above, by decoding its VIN plate I established it was powered by the 300Tdi engine and its chassis was the 110” wheelbase Extra Heavy Duty (XD) type; not to be confused with the earlier (1996-1999) modified Wolf XD chassis used only for British and Dutch military contracts. Points of interest on these hard top Czech Defenders are: the bumper-mounted WARN self-recovery winch; the steering rod protection plate and front differential guard; the Wolf-style pierced steel wheel rims; the two-piece front doors with sliding windows; the side lockers in front of the rear wheels; the antenna mount on the front left wing; the pioneer tool straps on the bonnet and clips on the right wing; the raised air intake on the passenger side of the windscreen; the clips around all glazing for fixing mesh screens; the military pattern rear bumperettes; the NATO towing jaws, the rear light protection; and the front brushguard. These modifications suggest to me that this is a military Core Model.

There were also three Defender 110 Station Wagons which I was able to photograph at IDET 15, but I do not believe these were all from the same batch and suspect the one pictured above could also have been a 2006MY example, though most likely a modified civilian spec vehicle rather than a militarised Core Model with XD chassis; unfortunately I was unable to photograph its VIN plate to confirm precise details. From the protruding radiator grille, the same as fitted to the 2006 Hard Top, I presume this Station Wagon was also fitted with the 300 Tdi engine. Although fitted with the same type of front brushguard and front left wing antenna mount as the previously mentioned three-door, this five-door Defender had: conventional wheel hubs; standard civvy front bumper; and a towing pintle rather than jaws. No rear bumperettes, rear light guards or steering guard plate were fitted.

The other two Station Wagons (above) which I was able to snap were, according to their VIN plate codes, to 2000MY build standard and powered by the Td5 engine; though the Td5 decals behind the front wheel arch were a bit of a give-away. Unlike the previously mentioned, suspected 2006MY, Station Wagon this pair both had military rear bumperettes fitted and their brushguards were bolted to military-style front bumpers with central towing pin, and one of the two had a front wing antenna mount, but no other military modifications were evident – though their primary paint scheme was NATO Green. This pair had inward-facing bench seats in the rear, whereas the younger Station Wagon had pairs of individual inward-facing seats.

The Hard Top Defenders spotted a month later in Poland, at the Distinguished Visitors Day for Ex NOBLE JUMP, both belonged to the elite 43rd Airborne Battalion of the 4th Rapid Deployment Brigade. This battalion is the core of the Czech Republic’s contribution to NATO’s multinational Very High Readiness Joint Task Force (VJTF) spearhead formation and it was them who deployed with the previously covered D130 KAJMAN batch. Both of these hard tops were almost identical to the lead vehicle in this feature and their VIN plate codes confirmed them to be to the same 2006MY build spec. One of this pair, which I suspect might have belonged to a Czech Military Police detachment, had white wheels and a full length roof rack plus mesh guards were fitted over the small rear windows. In the rear shot it is clear that a rear differential guard is fitted.

IDET is one of the smaller of the biennial international defence expos and while it is always interesting to visit, as indeed is the city of Brno, it falls during a busy period for field exercises so it is not really feasible for me to cover every show. Consequently I am not fully up to speed on the Czech Military Land Rover at the moment, but last I heard was that the plan was to refurbish rather than replace the ageing fleet. The current pandemic has ruled out the chance of working with Czech troops on exercise for the foreseeable future, but maybe I’ll get out to IDET 21 for a catch-up.