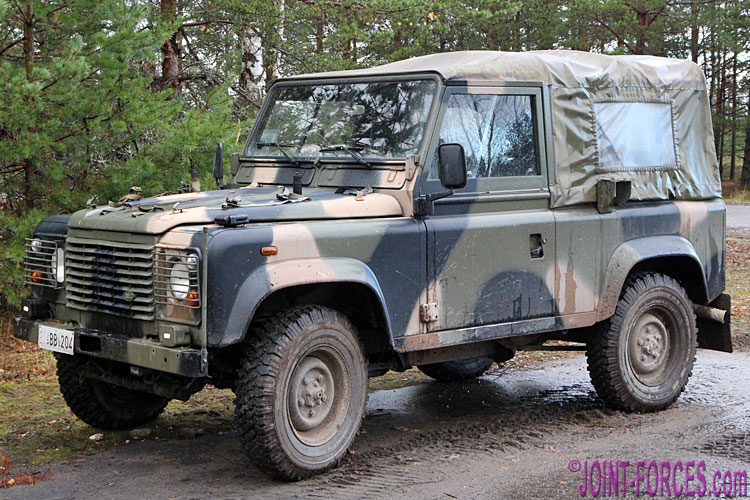 The bulk of the Italian Army vehicle pool deployed by 9º Reggimento Fanteria (9th Infantry Regiment) to Latvia last year on the NATO eFP mission, alternatively known as Operazione BALTIC GUARDIAN, was armoured but they also took a number of softskin support vehicles with them including at least one Land Rover AR90.

Known in Italian military service as the Autovettura da Ricognizione (Reconnaissance Car) 90, the Land Rover Defender 90 replaced the AR76 Fiat Nuova Campagnola in the 1990s and continues in service to the present day. Although the Carabinieri, Italy’s fourth military force and a gendarmerie, were the first to use the Defender (powered by the 1997cc 200Mpi petrol engine as fitted in their Discovery fleet) a couple of years later the Italian Army followed them by procuring a fleet of olive green short wheelbase soft tops; some of these were still in service in 2015, by which time they were at least 18 years old. These Italian AR90 Rovers, produced mostly between 1997 and 2003, were manufactured to full military specification (some nations opted to buy Core models which were essentially civilian specification to which some militarised components could be added locally) and as such have military night convoy lighting units front and rear and are Fitted For Radio (FFR) with SELEX antenna mounts provided on the left side of the rear compartment and on the rear right body panel; internally they have inward-facing rear bench seats and a transverse radio table behind the driver and commander seats. The power plant for these Defenders is the 2495cc 300Tdi turbo-charged and inter-cooled Land Rover engine as fitted to the UK Forces Wolf 90 and Wolf 110 (TUL HS and TUM HS) Land Rovers; although this engine was replaced in civilian Defenders by the TD5 from 1998 it was still fitted to many military specification vehicles well into the new millennium to ensure fleet commonality. Tyres fitted were Michelin XZL 4×4-O/R 7.50×16 radials, exactly as fitted to the UK Wolf fleet, but Italian military Land Rover wheels are plain rather than pierced. The AR90 has a side-hinged, rather than drop, tailgate and rear tilt has side window panels [© Bob Morrison]

The AR90 is widely used throughout the Italian Army by most regiments. I spotted vehicle BB•075 in Norway during BATTLE GRIFFIN ’05 where it was serving with the Alpini, who are Italy’s crack Alpine troops. The remainder of the images below were shot on TRIDENT JUNCTURE ’15 in Chinchilla in Spain, where the Bersaglieri were the main Italian participants. All vehicles are to the same standard specification. Photographed outside the multinational Brigade Main HQ, this AR90 has antennae fitted to both mounts and radios inside (but I was not allowed to photograph those) [© Bob Morrison]