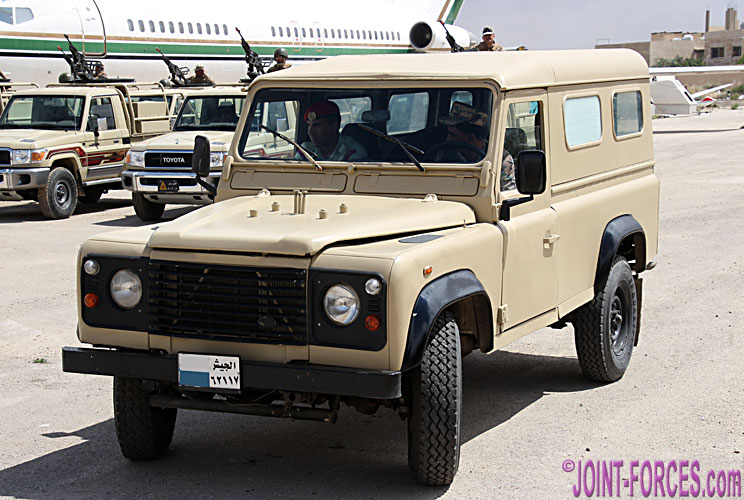 In this Military Land Rover feature, as promised, I am looking at the Jordanian Armed Forces fleet of Defenders using a mix of recent and archive photographs spanning some 14 years, writes Bob Morrison.

I first visited the Hashemite Kingdom of Jordan in 2004 to cover SOFEX, the biennial Special Operations Forces Expo held at Marka Airfield in the eastern suburbs of Amman, and I have returned to this intriguing Middle East country six more times since. Back then we were already aware that termination of UK production of the Defender was on the cards, due to impending European Union construction & use regulation changes, and speculation was rife that overseas assembly plants such as those in Turkey, South Africa and Brazil might take over to cater for the Asian, African and South American markets.

In the end, British production of the aluminium-bodied ladder chassis utility vehicle continued until 2016, a decade later than originally anticipated, and plans to continue bulk assembly overseas eventually petered out. In 2004, however, Jordan was also entering the equation and there were plans to build 10,000 Defenders annually from 2006 at a new £70 million assembly plant in the southern city of Ma’an being developed by the Shaheen Business and Investment Group or SBIG; in 2004 the official Jordanian distributor of Land Rover models, and for that matter the rest of the range from the Ford-owned Premier Automotive Group which included Land Rover, was the Ole Automotive Trading Company component of SBIG.

Ole Automotive had a large external stand at SOFEX 04, complete with a Land Rover Bridge on which they displayed two civilian specification Discovery and two military specification Defender vehicles, and several in-service military Land Rovers were also in attendance around this display feature and undertaking military logistics and security tasks. In the autumn of 2000 it had been announced that the Jordanian Government had ordered several thousand Defenders as CKD (Completely Knocked Down) kits for local assembly and the vehicles I photographed at the expo all appeared to have been from this batch; I also saw, and photographed, Jordanian Police Defenders undertaking security duties around the capital but that is slightly outside the parameters of this feature.

The Jordanian Armed Forces (JAF) Defender 110s produced at the start of the millennium fall into three broad categories: 3-door D110 Soft Top troop and/or cargo carriers, which form the bulk of the fleet; 3-door D110 Windowed Hard Tops, used in either troop transport or communications roles; and 5-door D110 Station Wagons, used for command and liaison duties. As in many armies, some of the Soft Top fleet had minor modifications and I spotted both a basic ambulance conversion with a rudimentary stretcher rack in the rear compartment and a patrol vehicle (not illustrated here) with a pillar mount for a general purpose machine gun on the rear load bed.

According to my records, confirmed by checking VIN plates against a database, the JAF 3-door Defender fleet consists of 2001 Year Model vehicles powered by the 2495cc 4-cylinder 300Tdi (16L) turbocharged diesel inter-cooled engine. Base colour is a matt sand colour and camouflage is limited to sparse vertical sprayed reddish brown patches and small green ‘cactus’ shapes to slightly break up the corners and door pillars; a digital camo scheme was later introduced for armoured vehicles but this was seldom seen on Land Rovers.

The 3-door models have two front seats, with cubby box between, plus four inward facing double bench seats in the rear but if a radio table and battery box is fitted in the rear compartment only the back two double bench seats are fitted. The Soft Top’s canopy is quite similar in style and fittings to that used on the British Army Wolf but has two large window panels in each side and one in the rear. Build specification, including cab interior, rear cross-member and bumpers, appears to be Core Model.

At SOFEX 2006 there was no Land Rover corporate presence, probably because SBIG was in difficulties in Jordan, and plans for major Defender production in the Kingdom were on the back burner; at the time I was told politics was the reason, but that was possibly polite speak by the ‘suits’. In 2008 TATA bought Land Rover from Ford and by 2012, when Jaguar Land Rover was formed, Mahmoudia Motors was the brand importer with military Defenders no longer being marketed; the 2001 JAF fleet, however, was still going strong and when I attended SOFEX this May (and WARRIOR COMPETITION at KASOTC the week before) there were still a few military Land Rovers beavering about their duties.

A source working in the international distribution business tells me his company still regularly ships quantities of Defender spares out to Jordan for government use, and it is believed a mid-life extension programme may also be underway. Those Defenders I spotted this May, even though coming close to having seen 18 years of service, all looked to be in pretty good condition and their drivers expressed satisfaction with their steeds despite brash young Toyota pick-ups often snapping at the older Land Rovers’ heels. These Defender ambulance, which were older than the rest of the fleet, were replaced in 2006 [© BM 2006]