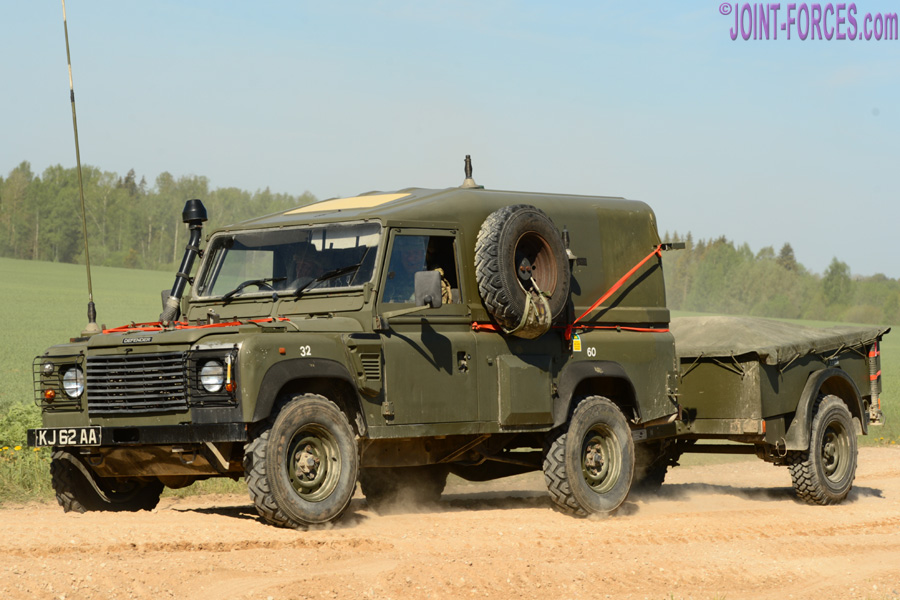 Some 25 years after entering service the British Army fleet of Defenders, in both 110 and 130 variants, is serving with Battle Group Estonia, writes Bob Morrison.

During Exercise SIIL (HEDGEHOG) 2022 in Estonia early this summer our Senior Correspondent Carl Schulze, himself a former owner of an ex-British Army Defender One Ten, made a point of photographing Defender 110 TUM (Wolf) and Defender 130 Battle Field Ambulance (Pulse) Land Rovers in the field to ensure we continue to document the marque in service. Although the changing nature of military operations, not to mention the draconian downsizing of the British Army since the end of the Cold War and dissolution of the Soviet Union in 1991, has seen a drastic reduction in the number of softskin (i.e. unarmoured) military utility vehicles in use there is still a requirement for comparatively small numbers of these workhorses in peacetime.

Of the 8,000 or so full military specification Land Rover Defender utility vehicles ordered by UK MoD in 1996, the vast majority of which entered service in 1997 and 1998, roughly four out of five were long wheelbase 110 models, designated Truck Utility Medium Higher Specification or TUM HS, with the remainder being short wheelbase 90 models, designated Truck Utility Light Higher Specification or TUL HS. Nicknamed the Wolf, as that was Land Rover’s codename when the vehicle was under development, both TUM HS and TUL HS models were produced in both hard top and soft top variants but the majority deployed to Estonia on Operation CABRIT are hard topped; unsurprisingly at the eastern Baltic can get very cold indeed in the depth of winter.

Going off temporarily at a tangent, the shorter TUL HS or Wolf 90 model (which was originally specified back in 1991 primarily to meet specific air transportation and landing craft dimensional envelopes for specialist users such as the Parachute Regiment and the Royal Marines) has been gradually phased out since the widespread introduction of the BOWMAN communications package. Although this tactical voice and data system, which eventually entered service in 2004 after several years delay plus a change of supplier, is too bulky and heavy for the full package to be fitted in the rear compartment of the Wolf 90 while still allowing a radio operator sufficient space to work, a small number of vehicles were converted for it; however I do not believe I have ever seen one of these short wheelbase Defenders operationally deployed on the NATO eFP mission in Estonia.

The Wolf 110 was produced in both left hand drive and right hand drive variants, with the only external difference usually (though as you will see from the photos not always) being the positioning of the spare wheel behind the passenger door (i.e. on the opposite side from the driver) to reduce obstruction of view. One might have presumed that because Estonia, like the rest of continental Europe, is a left hand drive country the UK MoD supply chain would have ensured that only LHD vehicles were deployed on Op CABRIT… but one can never accuse UK MoD of possessing an over abundance of common sense. With drivers sitting on the ‘wrong’ side of the vehicle for Continental driving the spare is often repositioned on the driver’s side to give him or her at least a a little bit of rear vision, which of course is even more important when the back compartment is full and there is no view through the rear door window.

One day I might eventually get around to filtering my list of UK Forces Wolf Land Rovers to find out just how many were produced in soft top configuration, but please don’t hold your breathe as it is well down my ‘things to do’ list. Although one might be forgiven for thinking that nobody in their right mind would deploy a ‘rag top’ Land Rover to a Baltic country when a hard top version is available, one would be wrong. Carl snapped KF02AA a TUM 4×4 HS soft top, which entered service on 5th June 1997, in the company of soft top Pinzgauers. Converted for BOWMAN, this left hand drive vehicle also has its spare wheel mounted on the driver’s side.

And finally to the Defender 130 Battle Field Ambulance, aka Pulse, which has also been deployed in very low numbers on Op CABRIT. A batch of 800 of these was ordered in 1996 at the same time as the 8,000 TUM HS and TUL HS batch, and although some have subsequently been sold off or converted to long wheelbase four-door high capacity pick-up trucks (see MLR49 Project HEBE ~ Ambulances To Pick-Up Trucks) it looks likely that those still in service could see double their projected 15-year service life.