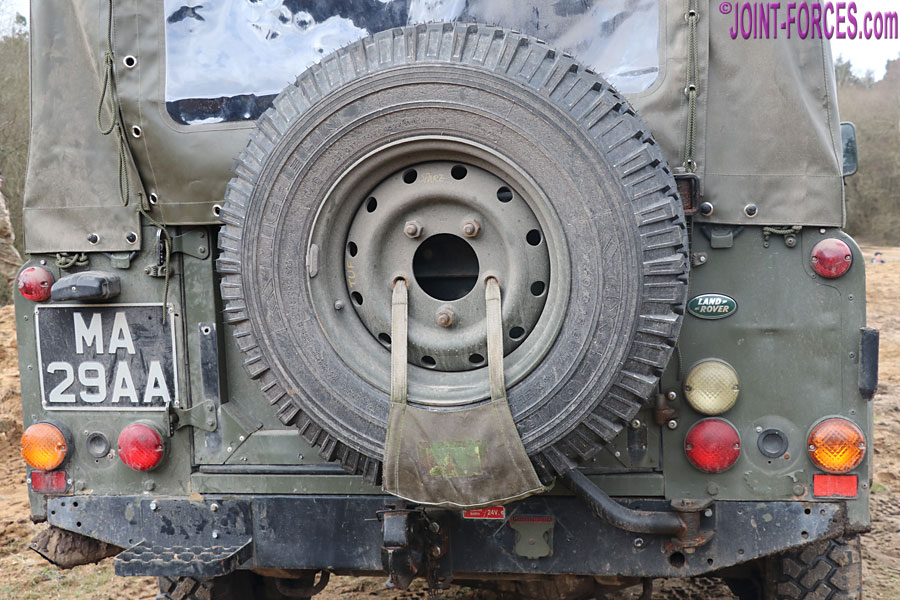 The UK Treasury does not have a bottomless pit of cash to draw upon, but sometimes it seems like the seat-polishers in the UK defence procurement chain (and the allied defence disposal organisation) don’t appear to quite grasp this rather obvious fact. So what has this to do with military Land Rovers, you may well be asking?

While undertaking a recce ahead of a major river crossing during Exercise ANAKONDA ’16 in Poland, which both Carl and I were scheduled to cover a couple of days later, one particular Land Rover Defender Wolf 90 being used by Royal Engineers building a ferry bridge over the Vistula caught my eye. I knew there was something unusual about it but in the heat of the action I could not waste time trying to work out what was bugging me about it, so I just grabbed a couple of snaps and resolved to take a closer look at it later in the week.

The vehicle in question, a short wheelbase Wolf 90 TUL soft top numbered LN91AA, was stationary in front of a hard top Wolf 110 TUM and accompanied by a German Bundeswehr five-door Geländewagen; all were part of the headquarters group of a highly specialist combined British and German amphibious engineer force rehearsing to build the longest M3 floating bridge ever assembled. If you look at this group photo you might spot that not only is there no spare wheel on the passenger side of the soft top Wolf, but there is no sign of the mounting bracket either which would normally protrude through the canopy on the left side of a right hand drive vehicle.

On the big day LN91AA was waiting to lead the M3 rigs out from their overnight riverside location and I when saw it I immediately spotted not only that that the spare wheel had been relocated onto a swing-away carrier on the rear and a side-hinged rather than drop down tailgate was fitted,but also that the rear tilt (canopy) panel had a zipped closure rather than the usual looped cord and eyelet lacing system. This type of tilt and swing tailgate was originally proposed by Land Rover during the initial Wolf trials, but I was told by the Government & Military Ops team at Solihull (while I was at Long Valley in January 1996 driving one of the recently ordered Wolf 2 trials vehicles for a company promotional video) that the UK MoD ruled it out on cost grounds. Back in 2016 I wondered if possibly this TUL with swing-away carrier and zipped tilt was a pre-production example but by later checking an officially published database of MoD Land Rover registrations I discovered it was one of ten standard TUL 4X4 HIGH SPEC SOFT TOP LANDROVERS which entered service on 7th April 1998 along with 60 other assorted Wolf and Pulse (ambulance) variants. I have still not come up with a suitable explanation why this one had that pre-production type tilt.

The swing-away wheel carrier, on the other hand, was not a conundrum as by the time that the 2016 edition of DVD (Defence Vehicle Dynamics) came around I had discovered Hobson Industries had been contracted to supply over 7,000 conversion sets, for fitting by REME Vehicle Mechanics at unit level. Hobsons had one of their demonstration fleet on their DVD stand and one of their engineers confirmed that the conversion included a MANTEC wheel carrier, side-swing tailgate hinges, updated wiring to suit revised rear light positions, blanking plates, a rear access step and a fitting kit.

When on a second trip to Poland to cover a later phase of ANAKONDA ’16 I had the opportunity to photograph a small fleet of R-WMIK Defenders used by the Mercian Regiment on the Wedrzyn Training Area and while working with this unit I spotted more Wolf Land Rovers converted with swing-away wheel carrier kits. As the soft top Wolf 110 TUM bearing the registration PP96AA was not carrying its spare wheel, the detail of the new carrier and side hinges is visible in the rear shot.

Unfortunately there was a problem with conversion package which, if Land Rover’s highly experienced but by then disbanded military sales team had still been in existence at the time of purchase, would have been spotted immediately because a comparatively cheap and simple solution had been around since the pre-Defender military Land Rovers entered service in the mid-1980s. To cut long story short, a Health & Safety issue with the new conversion prevented a standard military trailer being towed and so some MoD bright spark decided to just cast 6,000 unissued kits as being surplus to requirements. By July 2017 these kits were being officially sold off for a fraction of their cost, some reckon less than 20% of what the Treasury originally paid for the package, with private purchasers able to buy both the Wheel Carrier Set and the Modification Kit from an official MoD Disposal Agent at a living history show in Kent for a total just £140!

In the short interval between the first of the wheel carriers being issued to units and the decision to cast them, a small proportion were actually fitted and not recalled (hence my spotting some in Poland in the early summer of 2016) and from time to time over the last six years I have encountered the odd Wolf still fitted with one. The latest of these was a soft top 110 TUM in the field during Exercise IRON CHALLENGE this March.

In my opinion, having in the past fitted a swing-away wheel carrier to my own Land Rover (a Lightweight or Airportable Series III 88”) in the mid-1990s, this comparatively inexpensive accessory should have been introduced from the outset on the Wolf TUL/TUM instead of mounting the heavy spare high on the passenger side… but unfortunately the bean-counters decided otherwise only to throw away several million taxpayer pounds some 20 years later without solving the problems associated with the cost-saving original decision.