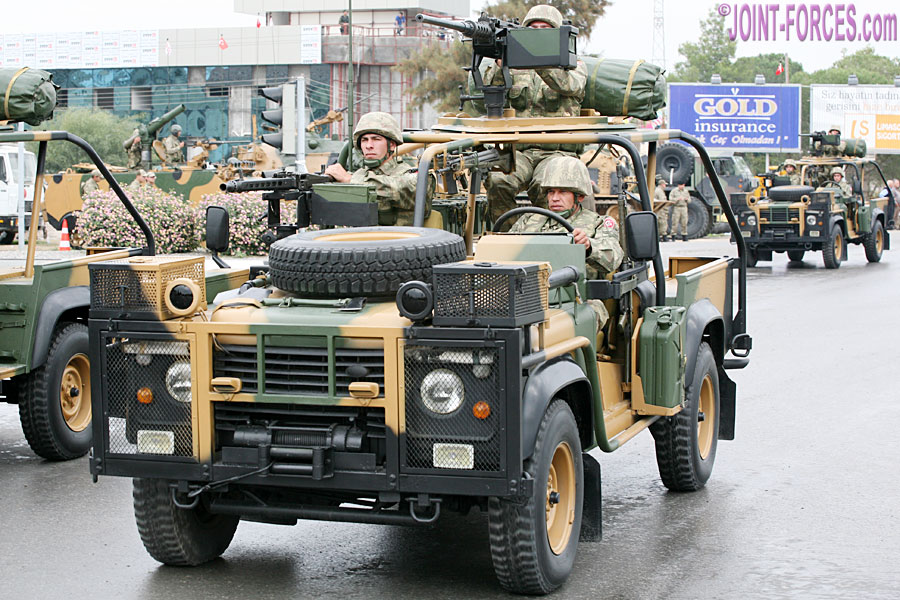 The Turkish Special Operations Vehicle or SOV is possibly the rarest of the many Land Rover Defender variants produced by Otokar, writes Bob Morrison.

The Istanbul-assembled SOV, which is a very close copy of the US Rangers Special Operations Vehicle or R-SOV model procured based on lessons learned in the 1991 Gulf War, rarely appears on camera but the one place it does appear from time to time is the divided Cypriot city of Nicosia (aka Λευκωσία or Lefkoşa). It was here, during the October 2014 parade commemorating the declaration of independence of the de facto Turkish Republic of Northern Cyprus, that I was able to capture the accompanying photos of not one but a dozen of these heavily armed gunships.

Looking back briefly to the origins of the type, which I plan to delve into in more depth as a prequel to a forthcoming series on the WMIK Land Rovers, it evolved out of a 1991 requirement from the US Army 75th Ranger Regiment for an easily heli-portable light gunship capable of transporting up to six Rangers as well as their weaponry. It is believed that a total of around 60-80 vehicles, in three or four distinct variants, were required to equip one company in each of the three Ranger battalions and these would go on to see service for around a decade.

Back in early 1992 a couple of my British Army Parachute Regiment NCO contacts tipped me off about the existence of a new American military Land Rover and after a bit of badgering the Land Rover Government and Military Ops (GMO) department decided to grant me access to the Lode Lane site to photograph what I believe was the prototype out beside the legendary ‘Jungle Track’ area where vehicles could be put through their paces. During this April visit the vehicle, which was essentially a five-door Defender 110 Station Wagon without upper body panels and roof but with a seven-point tubular rollcage mounting a weapons ring, was fresh off the production line and devoid of any stowage racks. The GMO team, on client confidentiality grounds, refused to confirm the customer or discuss the specification but the MPH speedometer and rear light wiring arrangement to allow running lights to double as turn indicators suggested it complied with American road traffic regulations; of course later on it would become clear that the Rangers were indeed the end users.

The following month Land Rover presented a Special Operations Vehicle demonstrator, along with other models from their military range, to the defence minister of a Far East nation and his accompanying entourage. The company’s Director of Government and Military Ops invited me to the event held at Eastnor Castle, where a UK defence export sales team also demonstrated in-service weapons and systems including mortars and artillery, and I was able to photograph the fully equipped vehicle which was mounting British Aerospace and Heckler & Koch (which they owned as well as Land Rover) weaponry. I have never been 100% convinced that this was the same prototype I photographed at the factory the previous month, as there are tiny detail differences and the two-tone vehicle, which I was permitted to drive around the estate a lunchtime, had more conventional indicators; but as I was unable to check chassis numbers I will never know for sure.

Apart from weapons and stowage racks the Turkish SOV version is almost a total clone of the Eastnor R-SOV, which made its public début at Eurosatory in June 1992, and they are not too dissimilar from their American R-SOV cousins either (see below). Primary armament of the Turkish vehicles is either an M2 12.7mm heavy machine gun, a 30mm AGS-17 grenade launcher with drum magazine or a 9M113 Konkurs (AT-5 Spandrel) anti-armour missile. There is a pintle mount next to the commander, in an elevating front passenger seat, for a 7.62mm MG3 machine gun and personal weapons for both driver and commander are clipped beneath the forward strut of the roll cage.

A mortar barrel is carried on the front left wing of the HMG and AGS versions, though this is not carried on the anti-armour version, and there are rectangular ammo storage baskets at the front of both wings of all three variants. A couple of the machine gun armed vehicles I photographed in 2014 also had RPG racks on the rear of the roll cage and swing-away rear pintle mounts for MG3 machine guns, but the others did not not; interestingly, the 1992 Eastnor demonstrator had a similar rear rack and rear pintle mount.

All Turkish SOV variants, just like their R-SOV equivalents, have secondary infrared headlights in or on the front brushguard, which unlike the prototypes or the US versions has a tubular stiffener running over the front wheel arch and down to the C-post chassis outrigger, and night convoy lighting, front and rear, is also fitted . All vehicles have bumper-mounted self-recovery winches. Finally, the most recent images of the Turkish SOV fleet that I have seen online appear to have been taken at the 2020 parade in Lefkoşa.

Footnote: This article should have been penned and published around mid-August 2020 but was forgotten when temporarily relaxed travel restrictions last year gave me the opportunities to first cover a rescheduled DEFENDER 2020 exercise in Poland and then SABER JUNCTION 2020 in Germany. My memory was jogged when a reader who has purchased a 1989 model year Otokar-built Defender Station Wagon in Philadelphia and is researching its history contacted me for info. Thanks Neil.