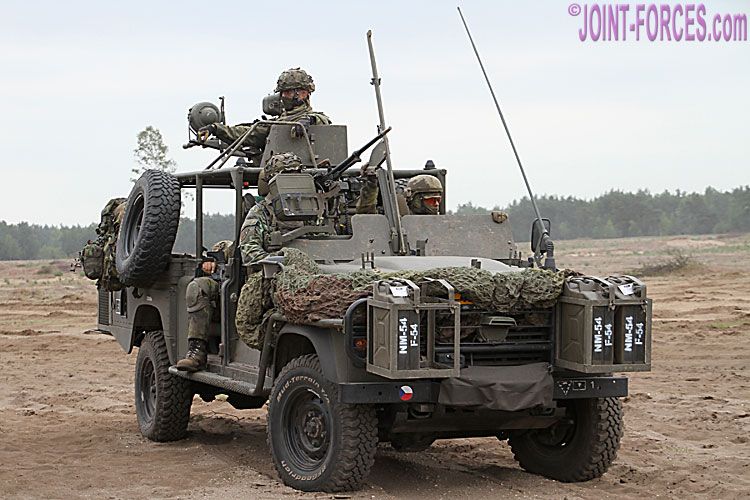 Shortly after the 1991 Gulf War the US Rangers, having seen how well the Land Rover used by British Forces performed in desert conditions when compared to the heavier HMMWV or Hum-vee which was their lightest utility vehicle at the time, visited Land Rover’s Government & Military Operations department in Solihull with a vary basic conceptual design for a Special Operations Vehicle.

In double quick time a prototype of what would quickly become Rangers Special Operations Vehicle or R-SOV was assembled at Solihull using a Defender 110 Station Wagon as a base vehicle. Although not widely discussed until after the event, and even then few facts were released by anyone involved, the small R-SOV fleet plus accompanying hard top Defender 110 ‘SHARK’ command and control vehicles were first operationally deployed to Spain and kept out of sight on standby during the 1992 Olympic Games to respond to an anticipated terrorist threat to the first such event to be held following the demise of the Cold War. The Games were thankfully trouble-free and the R-SOV fleet was not called upon, but not only was it held on the Rangers’ inventory well into the new millennium but it also prompted the design of what would in time become known as the Land Rover WMIK family.

The Royal Marines and British Army WMIK (Weapons Mount Installation Kit) family of Land Rover Rapid Deployment vehicles, first used operationally on Operation PALLISER in Sierra Leone in 2000 and later in both Afghanistan and Iraq, built upon the foundations laid by the R-SOV but these conversions used the conventional three-door body style rather than the five-door body derived from the Station Wagon, which the Rangers opted for. A small number of nations including Turkey opted for the original five-door R-SOV configuration rather than the later three-door WMIK design, but only the Army of the Czech Republic (ACR) appears to have procured both types.

The first two Czech Rapid Deployment Vehicles versions, which I did not have the chance to photograph in the field, were stopgap urgent operational requirement procurements on the Defender 110 chassis used until they could design, test and locally convert a dedicated vehicle which better suited the precise requirements of the 43rd Airborne Battalion of the 4th Rapid Deployment Brigade. This unit was, and is, designated as the core of the Czech Republic / Czechia contribution to NATO’s Very High Readiness Joint Task Force (VJTF) spearhead formation.

Formally designated LAND ROVER DEFENDER – MILITARY ARMOURED 4, though it is often called the KAJMAN (as in Caiman crocodile) on official documentation, this third RDV variant was modified in Czechia by AMT Defense and entered service in 2009. Based on the stretched wheelbase Defender 130, almost certainly using the heavy duty chassis manufactured by Otokar in Turkey, the KAJMAN has a combination body which mates mostly Station Wagon lower body panels to a High Capacity Pick Up rear tray, over which is fitted a removable roll cage which also carries a ring mount for the primary armament. Each of these vehicles can transport a fully-equipped six-man squad of paratroopers plus two support weapons.

My first opportunity to photograph the KAJMAN arose at the IDET 2015 defence expo in Brno, where one was taking part in a mobility demo outside the exhibition halls. IDET is very much a national and regional defence expo, where away from the international defence sales stands English is not widely spoken, but as my friend Jitka had accompanied me out to her native Moravia to act as my translator and smooth my path with her countrymen I had no problem taking exclusive walk-round photos and obtaining accurate information.

According to official ACR fact sheets, three different armament configurations are fielded on the KAJMAN: Type a) carries one 12.7mm NSV machinegun and one 7.62mm PKB machine gun; Type b) carries two 7.62mm PKB machine guns; and Type c) carries one 30mm AGS 17 automatic grenade launcher and one 7.62mm PKB machine gun. Combat weight for the KAJMAN Kolový Bojový Prostředek (CAIMAN Wheeled Combat Vehicle), which is powered by a 4-cylinder 2402cc Ford Duratorq ‘Puma’ engine, is between 3900kg and 4100kg and top speed is limited to 110km/hr (c.70mph). Information released by the Czech MoND, states that front and rear lower protection for the vehicle corresponds to STANAG 4569 Level One and, though not fitted in the accompanying photos, the KAJMAN has an underside blast protection armour plate similar to that seen on the British E-WMIK and R-WMIK models. Armoured plates are also noticeable ahead of driver and commander and removable ballistic glass windscreen panels can be fitted as well. Usually these vehicles are fielded without doors, but it appears both armoured and unarmoured doors are available, as is a foul weather canopy kit, and I later managed to snap one such vehicle during Exercise NOBLE JUMP 15 in Poland.

All KAJMAN Defender 130 Land Rovers have a bumper-mounted WARN winch for self-recovery, a pair of twin jerrycan racks mounted on the front brushguard, a large hooded central headlight for tactical night driving, and Australian SASR Perentie-type tubular strengtheners from brushguard back to D-post chassis outrigger which double as running boards. At the rear there is a near full width swing-away stowage pannier, similar to the one on the British WMIK, which doubles as a rear compartment tailgate and in which the foul weather canopy can be stored.

When crewed with six, the commander sits up front on a raised seat beside the driver and operates the secondary PKB machinegun, the primary gunner stands in the ring mount, two Paras sit on swivelling seats at the forward end of the rear compartment and a sixth Para sits on a swivelling seat at the rear right. There is also a rudimentary jump seat for the gunner on the loadbed behind the second row of seats for when he does not need to man the main weapon. The five full seats have mesh panels for comfort in hot climates. Although I have not seen photos confirming this, I suspect that for active operations MAPIK-style lightweight soft armour panels would be fitted to the rear section of the roll cage in the same way that they were fielded on the 4-man Czech Defender 110 SOV batch used by 601st Special Forces Group in Afghanistan.

Official documentation states 79 of these 3rd Generation KAJMAN vehicles were purchased – a single prototype followed by batches of ten and 68 – and are all Fitted For Radio with antenna mount on the front left wing and terminal boxes above and behind driver and commander. In addition to conventional lighting, with night convoy override, they also have a single central hooded headlight with a removable cover and hood so that only the driver can see the beam.

As has often been the case over the last three decades of seeking out unusual military Land Rover variants, it can take an age for me to be given my first chance to photograph one only for a second opportunity to present itself not long afterwards. Just one month after photographing the lone KAJMAN at IDET in Brno in May 2015 I was confronted by no less than ten of its siblings during the multinational NATO Special Operations Forces demonstration laid on for Distinguished Visitors during Exercise NOBLE JUMP in Poland. These unique Defenders had been flown forward inside a pair of USAF C-17 Globemaster III transport aircraft after the NATO VJTF was mobilised at short notice for the exercise. 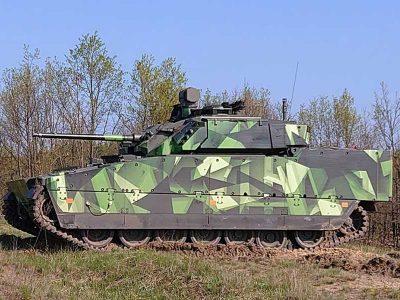 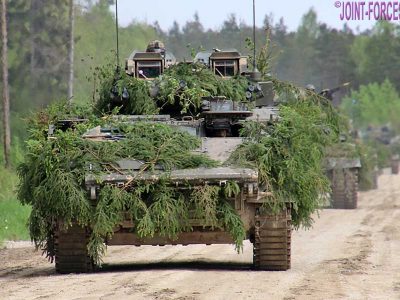 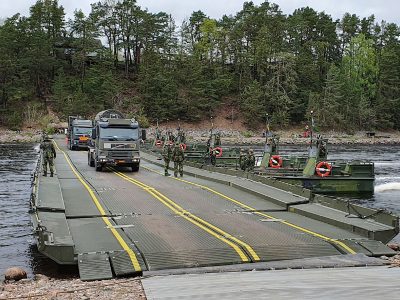