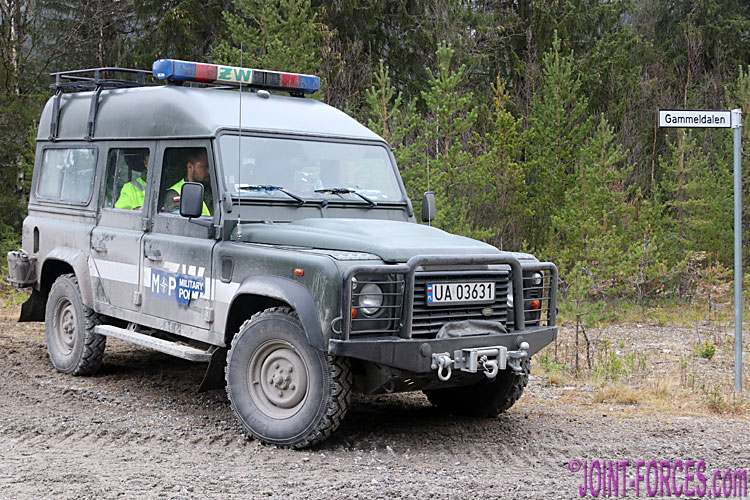 Deployed as part of the British-led 4 Multi-National Brigade on the central north-south axis during TRJE18, the Polish contingent consisted primarily of a Mechanised Infantry Company in BWP armoured personnel carriers with T-72 main battle tanks in support but it also included a Military Police detachment which worked alongside the British Royal Military Police platoon supporting the brigade.

Created in 1990, following the demise of Communism in Eastern Europe, Żandarmeria Wojskowa is the fourth branch of the Polish Armed Forces. During a break in the TRJE18 action, while Red Forces were finalising their defensive positions on the central axis and Blue Forces were preparing to counter-attack, I crossed the lines via the unsurfaced road south from Telneset towards Brydal and was rewarded by bumping into a Polish Military Police team stationed at a junction on the interface to ensure local traffic was aware of the presence of unusual troop and military vehicle movements in the locality.

From past research I have been able to determine that a batch of 140 Land Rover Defender 110s, in both Station Wagon and Soft Top versions, was procured in the middle of the last decade by the Żandarmeria Wojskowa or ŻW. Unfortunately, on client confidentiality grounds neither Jaguar Land Rover in Warsaw, who supplied the Core models, nor long term dealers TEAM Marek Pasierbski in Wrocław, who undertook the conversions, were able to discuss specifications or go into detail with me so some of this feature is based on personal observation.

This Station Wagon, without roof rack, was spotted during Exercise RYS 14 in Poland [©BM]

My first chance to photograph one of these unique Station Wagons, easily identifiable from a distance by their higher than normal roofline, was during Exercise RYS on the Żagań Training Area at Świętoszów in November 2014 where one of them was working closely alongside British Military Police hard top 110 Defenders on manoeuvres with 12th Mechanised Brigade. My next opportunity to snap this variant, and its soft top sibling which I will cover in another article, as well as to discuss Polish MP Land Rovers with end users, came during the multinational Exercise NOBLE JUMP in June of 2015, also held at Świętoszów.

In addition to a number of Station Wagons being used for typical MP tasks during the Distinguished Visitors Day at Świętoszów, two immaculately turned out Land Rovers were presented on the static stands following the three-phase dynamic display by Special Forces, Air Assault Forces, and Armoured Forces. After the NATO Secretary General Jens Stoltenberg, senior politicians and NATO top brass had visited the ŻW stand I took the opportunity to talk Land Rovers with the Military Policemen who, like most who rely on Defenders to do their job, were more than happy to talk shop.

After confirming that they actually liked their vehicles and had no major issues with them, I was able to establish the precise age and specification of the fleet by checking VIN plates. This was a simple task as not only were the plates easily visible through the windscreens and the users were happy for me to photograph them for research purposes, but data boards with basic specifications were also provided in both English and Polish.

Categorised by the Polish MNoD as being a Samochód Interwencyjny, which translates literally as Intervention Vehicle though it is probably best to consider this term as equating to Patrol Vehicle, the Poles do not use the term Station Wagon but call this variant a Hard Top to differentiate from the Soft Top. The vehicle has a seating capacity of eight, including driver and commander, compared to only six in the soft top, and when I looked inside through the windows I determined not only that the four rear seats were individual and inward-facing, but also that the second row of forward-facing seats had box section uprights to which both seat back panels and high-line head restraints were fitted.

As is evident from the photo where a Polish Station Wagon is parked next to a Czech Airborne D110 hard top, the roof of the former is clearly higher than usual which gives considerably more headroom and allows taller troops to wear combat helmets inside without discomfort. When I wrote about these vehicles in the past I stated that the roof was about six inches (150mm) higher than that of the British Army Wolf, which is itself slightly taller than a standard civvy Defender.

The Polish MNoD has given the height for their Station Wagon as being 1997mm. I do not believe that figure to be accurate and suspect it may have been lifted from Land Rover’s standard Core model sales literature, meaning the higher roof line has not been allowed for. I am still inclined to run with my 150mm estimate, though with hindsight I wish I had taken a tape measure to Poland or Norway.

The data boards stated that these Defenders are powered by a 2495cc 5-cylinder diesel engine through a 5-speed manual gearbox and this is confirmed by the VIN plates which indicate Model Year 2006, Left Hand Drive, 2.5-litre Td5 on standard, rather XD chassis. Maximum speed indicated by the user is 129km/hr, which is a smidgen above 80mph, with output given as 90Kw or 120hp at 4200 rpm.

In addition to the roof there are a number of other visible differences between Polish MP and British Army Defenders, not least of which are the jerrycan racks and the self-recovery winches. The latter, which are mounted behind an enlarged front bumper with tubular brushguard above, are plated as TEVOR winches; this company, which is based in a small town about 150km due south of Warsaw, is a general distributor for RAMSEY Winch of Oklahoma.

Bumper-mounted self-recovery winch, here with canvas cover fitted, is plated TEVOR but is made by RAMSEY [©BM]

The Polish Station Wagon, or Hard Top, is equipped with air-conditioning and a Webasto heater; as parts of Poland can get a bit chilly in winter yet become very warm at the height of summer, these are a bit of a necessity for patrol vehicles. Vehicles are also fitted with Garmin GPS and radio-telephones for Police communications. A military convoy light is mounted on the lower left rear and a red & blue light bar is mounted above the cab.

Most Polish Military Police vehicles, including cars and minibuses, but with the exception of covert vehicles such as Land Rover Discoverys – I will do a short feature on these at a later date – are identifiable by a deep white bar on each side with the italicised initials ZW (note bar through the Z) on the front doors. These initials are also found on the light bar. Paint colour is usually matt NATO Green IRR but, as in the case of the vehicles presented at the NOBLE JUMP 15 Distinguished Visitors Day, highly polished examples are sometimes presented for displays or parades.