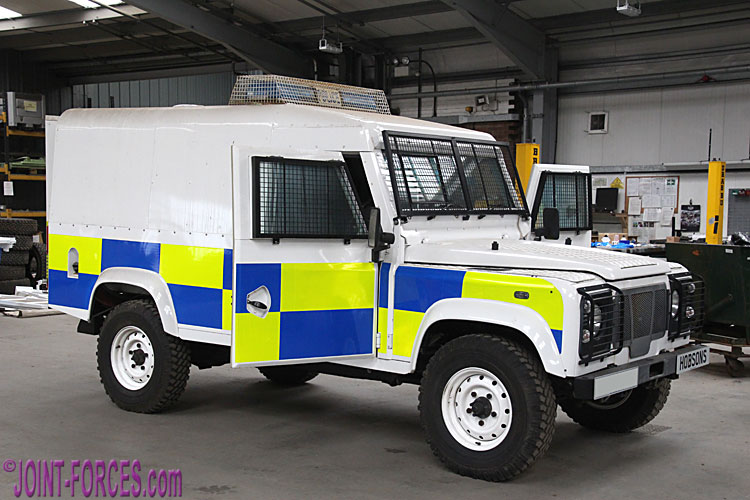 Founded in the 1980s by former Royal Navy engineer Peter Hobson, the company that bears his name quickly evolved from being a spare parts supplier into one of the country’s leading refurbishers of both armoured Land Rovers and discreetly armoured police vehicles. Around the cusp of the millennium Hobsons were instrumental in keeping the Royal Ulster Constabulary’s ageing Tangi ALR (Armoured Land Rover) fleet running by refitting them with the same turbo-diesel inter-cooled (Tdi) engine that powered the British Army’s then new Defender Wolf fleet and the company also undertook upgrade work on the protection side, but mostly this was not publicised on Operational Security grounds.

When in late 2001 the Police Service of Northern Ireland (PSNI) took over from the RUC, as agreed under the terms of the Good Friday Agreement, Hobsons continued to work closely with the new force and also produced a prototype ALR for them powered by the new Td5 engine. As Peter is not only a national level championship shooter (we must do a profile on him sometime) but also has his own indoor 30-metre range to allow him to experiment on developing lightweight armour concepts, there are possibly few better qualified to develop new solutions for discreetly armouring vehicles.

We visited the company’s main production facility in the Lincolnshire Wolds a few weeks ago to see vehicles being prepared for the upcoming DVD (Defence Vehicle Dynamics) biennial expo, being held at Millbrook Proving Ground, and when there we learned that a new Remote Area Patrol Vehicle gunship armed with a chain gun was in the wings. However JOINT-FORCES.com readers will have to wait until later in the week, when the wraps come off, to see images of this.

The company’s THEMIS up-armoured Internal Security Vehicle demonstrator was being dusted off at the time of our visit and this is also scheduled to appear at DVD 2018. Based on a Courtaulds CAV 100 (Composite Armoured Vehicle) with additional lightweight armouring to increase protection levels, this demonstrator is actually a refurbished ex-Army ‘Snatch’ Land Rover; Hobson’s vast stocks of spare and asset-managed genuine parts can be married to a sound CAV bodyshell to give an ‘as new’ up-armoured low profile vehicle at massive cost savings compared to the price of a bespoke new light protected patrol vehicle.

We will look in more depth at Hobson Industries and Hobson Parts in future features.

You can read more about Project X, the maroon civvy Land Rover seen above, on