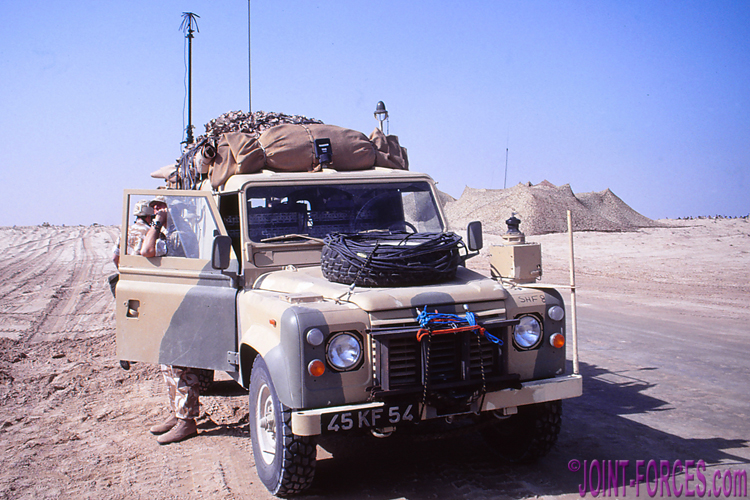 Established on 1st April 1918, at 100 years of age the Royal Air Force (RAF) is the world’s oldest independent air force and today it formally celebrates its centenary with a flypast over Buckingham Palace, writes Bob Morrison.

Around 35 years ago, at the height of the Cold War, I used to spend mid-summer weekends in the company of a bunch of camera-wielding mates at military air shows or air bases in southern and eastern England but while the rest of the lads were jostling for elbow room in the aviation enthusiasts’ enclosures yours truly was focused in completely the opposite direction.

Why waste time in amongst the herd trying to snap backlit fast-movers when the RAF had many more slow-moving, and nicely lit, Land Rovers than oil-burners and paraffin budgies that were just crying out to be snapped?

Photographed in 2003, after restoration by former RAF firefighter Steve Shirley, this is the same RAF TACR [© BM]

Without aircraft there would be no Royal Air Force, but without the humble Land Rover during the last half of the 20th Century the youngest of Britain’s three core armed forces would probably not have been able to fully undertake its primary mission. Close airfield defence is traditionally undertaken by the RAF Regiment, who in effect are the Air Force’s own Army, and they have made use of Land Rovers of various models since the 1950s, but several other branches of the service have also used some of Solihull’s finest vehicles for a wide range of tasks.

Airfield Crash Rescue is probably the Land Rover (and Range Rover) role which many enthusiasts would first associate with the RAF, who used many types of both fire truck and ambulance conversion over the years, but in reality it was the bog standard models which saw most widespread service. As always, however, the humble but ubiquitous Land Rover usually went unnoticed as eyes were drawn to the sleek, and some would say sexy, lines of the aircraft they supported.

The accompanying photos, mostly taken by myself but including a couple supplied by friends plus two historic official RAF publicity images, will hopefully give the viewer an idea of some of the varied roles which Land Rovers, and Range Rovers, have played in the Royal Air Force over the last fifty or so years. The RAF Regiment used Land Rovers for airfield defence – this 7.62mm GPMG-armed Series III was on duty at Dhahran in January 1991 just before the outbreak of Gulf War One [© BM] The RAF Regiment ran a fleet of dedicated CAV 100 (aka Snatch) EPV armoured Land Rovers in Kabul, Afghanistan in 2002 – note the armoured side windows [© Carl Schulze] I spotted this RAF Series III hard top with helicopter servicing platform on the roof and starting cables on the side near Al Jubail, Saudi Arabia, on Operation GRANBY in January 1990 Photographed at RAF St Mawgan circa 1987, this was one of four Shorland APVs on the base ~ US Marines guarding nuclear warheads stored at the Cornish airfield used the other three – note US stock number on bumper [© BM] Finally, the RAF Regiment also used the Forward Control 101″ Land Rover model, mostly as Rapier Tractors ~ this historic image of the 1982 Falklands Victory Parade was recently re-released by the MoD to mark the Centenary [Crown Copyright]