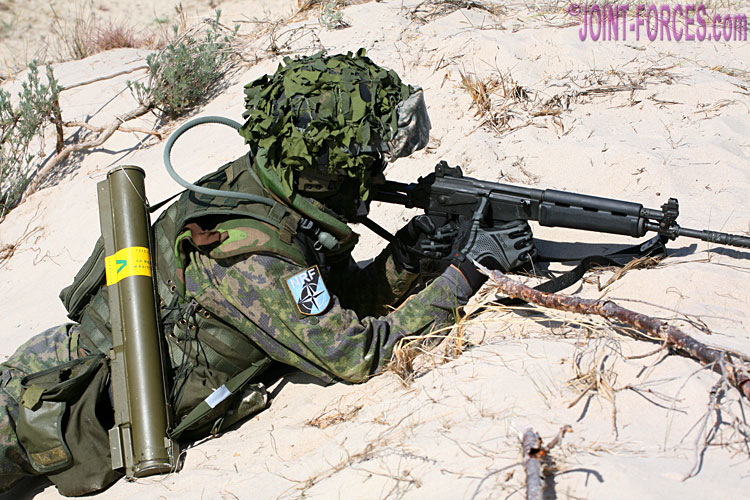 For this article I am continuing with the Baltics theme and now take a look at the current Finnish M05 Maastokuvio or Terrain Pattern uniform camouflage, writes Bob Morrison.

The last article in this series covering Finland’s comparatively rarely seen three-colour M91 ‘Kurkkusalaatti‘ pattern, published just a couple of days ago, generated quite a high volume of interest so I have decided that rather than holding back for a few days I will run this feature on the current four-colour pattern almost back-to-back.

At time of writing although I have photographed Finnish troops wearing this camo pattern in Poland, on BALTOPS 15, and in Estonia, on KEVADTORM 17, because in both instances soldiers were in the LIVEX phases and unable to take a couple of minutes out, I have not yet been able to extract one off to the side to do my customary four-view walk-around. However hopefully the above two photographs, plus the shots further down the page, will give viewers a feel for how personnel wearing M05 Maastokuvio appear in the field.

In the early years of the current millennium the temperate theatre M92 woodland-type camo pattern worn by Finnish Rapid Deployment Force (FRDF) volunteers serving in arid theatres on multinational operations was not only out of place but beginning to look outdated when compared to what NATO troops working alongside them were wearing. In answer to this the Finns speedily produced a three-colour desert camo, M04 Hellepuku (which roughly translates as Light Uniform) in quite similar colours to German Wüstentarndruck desert pattern and then in 2005 they issued the in some ways similar design M05 Maastokuvio pattern as their general camouflage for wear at home and overseas in temperate theatres. Many other nations around this time were issuing digital camo pattern uniforms to their troops, and at first glance both M04 and M05 Finnish patterns can appear like they too may be digital, but close up it soon becomes apparent that there are no ‘pixels’ or even straight edges whatsoever and the effect is definitely mimetic.

As can be seen from the above close-up of M05 Maastokuvio fabric, rather than being digital or pixellated in form the colour patches mimic foliose lichen. In my opinion, and using X11 web colour names to try to give consistency, the four shades used are close to DarkOliveGreen (#55682F) and ForestGreen (#228822) with Black (#000000) on a Tan (#D2B48C) base. The fabric sample above was an area of the shoulder panel of the combat jacket seen in the two shots below.

In early 2017 Varusteleka of Helsinki, a specialist military and outdoor clothing supplier, sent me a review set consisting of a combat jacket and trousers plus bush hat manufactured from 50/50 polycotton Cooltex 3 NIR-compliant fabric produced in Finnish M05 Maastokuvio pattern. A design originally copyright protected with commercial production and non-military sales prohibited, from the autumn of 2016 restrictions were lifted to allow both private purchase and export of M05 pattern garments and rucksacks etc. At the time Varusteleka assured us that this set, bearing Särmä brand labels, was manufactured in the same factory in neighbouring Estonia as the standard Finnish military uniforms and the camouflage pattern was 100% authentic.

It should always be borne in mind that colours of well-worn garments in the field seldom retain the punch of brand new and, while camo pattern uniforms on the parade ground are usually deliberately smart, those worn on exercises or deployments will almost invariably be dusty, dirty and faded. The brand new uniform Victoria was wearing for the above shots was snapped in Somerset in flat light on a very cold February day where possibly surprisingly it blended in very well with the background. On the other hand the mortar team photo was taken in bright sunlight (from high left) mid-June among the Baltic coastal dunes of Northern Poland where the contrast between white sand and dark uniform (including olive load vests) was very high resulting in camo detail being lost. However with the light behind the camera for the lead shot, of a Finnish soldier providing perimeter security for the mortar line, the colours are much punchier. In the photo below, of Finnish combat engineers in Estonia, several days out in the field on the dusty Central Training Area has subdued the colours on the trousers. Sometimes dust and grime can be almost as mimetic as the very best of camouflage patterns.

In the next Kit & Camo article, unless something totally unexpected crops up, I plan to turn my attention to Poland to end the recent Baltic theme which viewer correspondence suggests has been quite popular.