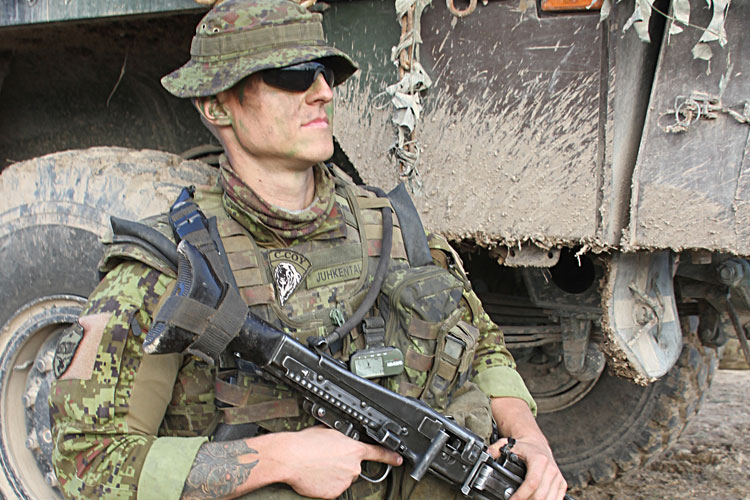 In this article I look at Estonian Digital Camouflage Uniform, or ESTDCU, as worn by troops of the third of the Baltic States on NATO’s northern flank, writes Bob Morrison.

The troops of each of the three neighbouring former Warsaw Pact countries on the eastern shores of the Baltic Sea who joined NATO on the same day in March 2004, collectively known as the Baltic States or the Baltic Nations, wear their own distinct and surprisingly different camouflage patterns.

Estonian Digital Combat Uniform (M06 ESTDCU) temperate pattern is a four-colour pixellated design introduced in 2006, around the zenith of the digital pattern era which commenced in the last half of the 1990s; subsequently the analogue MultiCam and its derivatives would make these digital patterns less fashionable, though not replace them entirely. Few armed forces are able to persuade their national treasury to entirely replace a comparatively new camo pattern, particularly one which works well on their home terrain, solely to keep up with fashion trends and in the forested areas of NATO’s potentially vulnerable north-eastern flank M06 ESTDCU strikes me as being fit for purpose.

The soldier pictured above was a machine-gunner from Charlie Company of the all-professional Eesti (Estonian) Scouts battalion from 1st Infantry Brigade, who deployed to Spain on the multinational NATO Exercise TRIDENT JUNCTURE 2015 in the October and November of that year. The Scouts are a main component of the Baltic Battalion, a 1000-strong multinational force of Estonian, Latvian and Lithuanian troops, which when these shots were taken was operating as mechanised infantry on the CENAD San Gregorio training area near Zaragoza. His verdant camouflage, unlike the LATPAT uniform worn by Latvian colleagues, did not work particularly well on that arid terrain but had TRJE15 been a deployment rather than a short duration exercise most likely the three-colour desert variant of ESTDCU would have been issued (see photo below).

Camo buffs will spot that ESTDCU is quite similar to the temperate version of Canadian CADPAT, which of course was the first of the digital patterns to enter service back in 1996, but although there are clear similarities the two patterns are not identical; as the Canadian and Estonian forests are remarkably similar it is perhaps unsurprising that the Baltic nation followed the North American lead to some extent. The colours of the Estonian digital camo are, in my opinion and using X11 web colour names for consistency, primarily LightGreen (#90EE90)and Olive (#808000) with Firebrick (#B222222) and Black (#000000) as the minor colours. The Canadian pattern uses a less reddish brown shade and the Estonian pattern uses more LightGreen and less Black than CADPAT. In my opinion, when looking at large areas of the printed fabric ESTDCU pattern is also less linear than CADPAT.

This second Eesti Scout, photographed in an Estonian forest clearing during Exercise KEVADTORM 17, is also wearing ESTDCU uniform. I asked this machine-gunner to move out from his position into better light to so viewers could see more detail but when lying prone in his (non-prepared) defensive position he became much harder to see among the springtime vegetation.

Although these days closely linked to Latvia and Lithuania to the south, culturally and historically Estonia has closer links to Finland to the north with languages of both countries being categorised as Finnic whereas the southern neighbours’ languages are categorised as Balto-Slavic. Of more relevance in a camo context, the geography and climate (when winter snow is not on the ground) of the two Finnic language nations on either side of the Gulf of Finland, at the north-eastern end of the Baltic Sea, is also very similar so it is perhaps unsurprising that their camouflage patterns are not too dissimilar even though one is digital and the other is analogue.