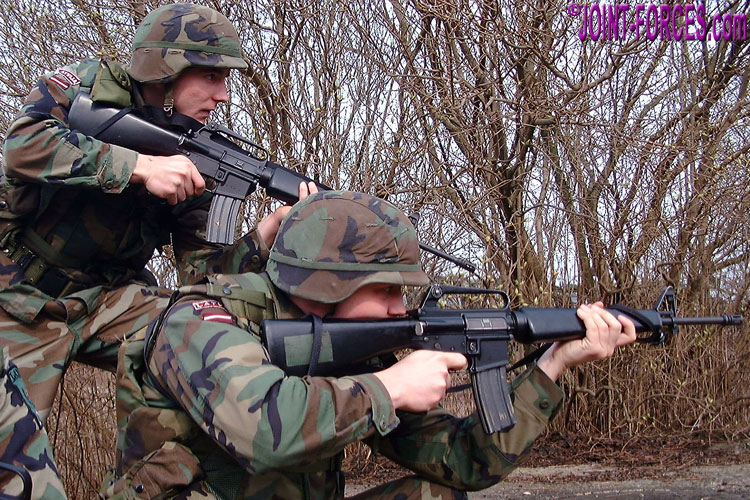 Before leaving the Latvian camouflage pattern theme, I am now taking a very brief look back at US M81 Woodland camo as seen worn in 2002, writes Bob Morrison.

The Latvian soldiers featured here were photographed in Poland on the NATO-led multinational PfP (Partnership for Peace) Exercise STRONG RESOLVE 02 at a time when Latvia was well down the route of transitioning from a former Warsaw Pact nation into a full member of the NATO Alliance.

Some sources state that Latvia produced its own variation of US M81 Woodland camouflage pattern, but when I photographed these LATBAT (1st Latvian Battalion now 1st Mechanised Infantry Battalion) troops in 2002 I was told that their uniforms, helmets and personal weapons etc. had been sourced from surplus US Army stocks. Bearing in mind that at this time the US Government was providing military assistance to the three Baltic States – Estonia, Latvia and Lithuania – and that they would be accepted as full members of the Alliance just two years later, in March 2004, I am not convinced that this was actually a copy camo pattern. Additionally, as ballistic vests and helmet covers etc. appear to be full colour matches for the BDU-style combat jackets and trousers worn here, I am sticking my neck out and saying the uniforms were genuine M81 pattern.

For those unfamiliar with M81 Woodland, often said to have been the most widely used of all modern era camo patterns and certainly very widely copied for both military uniforms and civilian garments, this camouflage evolved at the start of the 1980s out of a Vietnam Era camo. Originally designed post-WWII as a tropical theatre camo by the US Army Engineer Research & Development Laboratory, hence being named ERDL, and resurrected with two colour variations in the 1960s, the father of M81 Woodland had a much tighter grouping of colour shapes but subsequently this pattern was scaled up to give the four-colour camouflage which served US Forces operating in temperate theatres right through until the introduction of digital patterns at the start of the 21st Century. Incidentally, although US ‘choc chip’ desert camo pattern was worn by many during Operation DESERT SABER in 1991 (note that Op DESERT STORM was the Air Campaign only) during the initial DESERT SHIELD deployment to Saudi Arabia in 1990 it was M81 Woodland camo that most US troops wore.

Unless you are wearing your balaclava back to front you cannot have missed that the centre image in the above triptych is badly out of focus. Back in early 2002 I owned a very basic digital ‘point & shoot’ camera and it was with this that I took these images – the first time I believe that I ever tried doing a set of walk-around camo uniform shots in the field. Back then functionality of such cameras was very limited (image size was just 1800×1200 pixels giving a 6×4” print) and unfortunately I only spotted that this shot was badly out of focus once it was downloaded to my laptop in the evening, when shooting it again was out of the simply question. Normally I would consign such a poor shot to the bin but, even though it is fuzzier than a very fuzzy thing, a little detail can be gleaned from the shot so I have decided to include it.

The close-up of the camo pattern is of an old M81 Woodland fabric swatch in my collection, photographed today specifically for this article. Nothing should be read into perceived colour differences between this sample and the original photos taken 18 years ago, as of course there are few parallels between either the lighting conditions or the CCD sensors used.