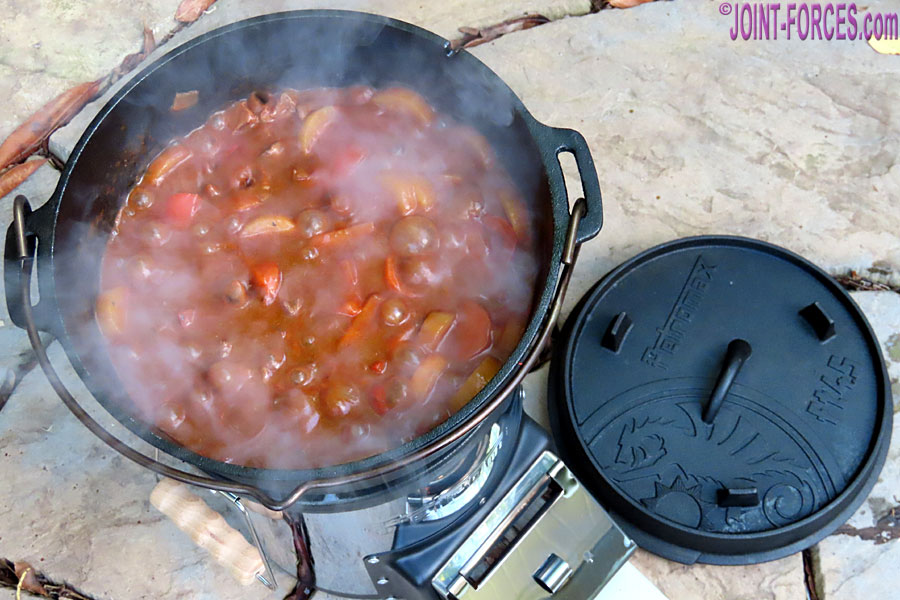 Cooking, old style ~ the cast iron Petromax Dutch Oven is ideally suited to cooking in the open air as in the oven or range at home, writes Mike Gormley.

This Dutch Oven from Petromax takes me back to my time living in Africa, where cast iron pots are commonplace especially on trips out in the Bush. We had a simple version which we used both in the bush camps and in the kitchen at home, as do many; they are often known as Potjie out there.

So, there is nothing new really in this concept and in many ways, it is a case of “if it ‘ain’t broke, don’t fix it”. However, the Petromax Dutch Oven is an up-to-date version of the cast cooking pot which comes in a wide range of sizes and designs. Some have legs, my one does not, but it does have a handle which allows for it to be hung over an open fire as well as placed on one or, as in my case, on a wood-powered Petromax Rocket Stove. I have also used it for garden cooking inside my wood stove / pizza oven, so, this is a very versatile and robust cast iron cooking pot. You can, of course, use it in the home so long as you don’t have an induction hob and it works really well on a traditional kitchen range.

The model I have, which sits about middle of the Petromax range of Dutch Ovens, is slightly confusingly designated as the ft4.5 and has a capacity of 3.5 litres. However add to this the capacity of the lid, which is also a cooking vessel when turned upside down, and you get a total capacity of 4.5 litres. This is a neat design as the lid fits well on top of the pot and has a cast in loop handle so it can be lifted off, with tongs or a cloth of course as it will be hot. It also has three cast feet to make it stable on flat surfaces or to stand over some glowing embers. Sausages after the Guy Fawkes bonfire perhaps? I can smell them now! The lid also has a raised edge rim so the bush chef can add embers / charcoal to the top so to give all round heat. I am told this is great for baking bread, but not tried this – yet.

One of the great things about these is that they retain heat. So, if you are cooking your breakfast fry-up you can use both and if one is off the fire or cooker the other will keep things warm or keep things cooking, so all is hot and ready at the same time. I’m no chef but these are grand to cook up a camp breakfast or slow cook a stew / hotpot. This oven comes with a recipe book to get you going and for sure there are plenty of well-tried recipes out there to keep your taste buds well and truly satisfied while at camp or at home.

I have mostly used my Petromax Dutch Oven atop a Petromax Rocket Stove, which I will cover in detail in a later separate review. I suspect with the current fuel situation in the UK and if you have some wood about, a setup like this could soon be earning its keep as well as being a great way to produce your hot tasty food outdoors. These are easy to care for, once oiled up ~ just wash off when cool and they are ready for next time. Not perhaps a pot to pop in your bergen / rucksack for a long trek, as it weighs in at 7.5kg, but so long as a vehicle (or perhaps canoe) can be used for the main transport all you need is a bit of dry wood and away to go for those chef du bush meals.