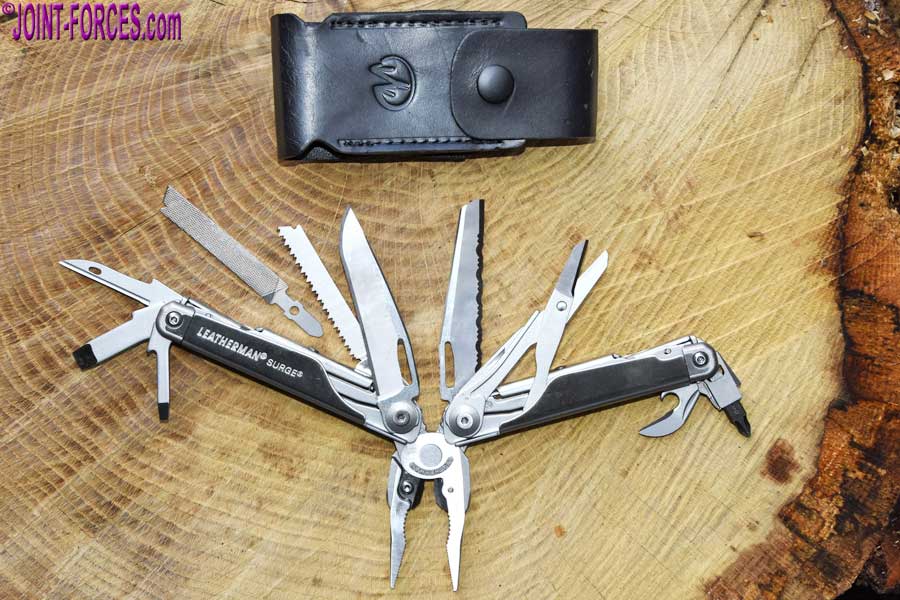 A recent change to our Leatherman advert reminded me that around five years ago I commissioned Mike Gormley to review the SURGE Multi-Tool, writes Bob Morrison.

Good belt tools are a bit like SLR cameras and once you become loyal to a particular brand you tend to stick with it for a very long time. Both Mike and myself, although we review and use other belt tool makes from time to time, fall squarely into the Leatherman camp.

Next year the Leatherman Pocket Survival Tool, the original multi-tool / belt tool conceived by American Tim Leatherman during a 1970s road trip of Europe with his new wife, will be forty years old (and later this year my first Leatherman MULTITOOL, a Pocket Survival Tool II model, will have its 25th birthday). The SURGE Multi-Tool is at the Heavy Duty end of the Leatherman range, taking the ‘toolbox on your belt’ concept to another level with its interchangeable blade, wirecutter and driver bit options plus in-built spring-loaded mini-scissors. Over to Mike now for his 2017 appraisal of the SURGE ’21-in-1′ model, which was introduced in 2005 and revised in 2013 >>>>>

To me, writes Mike Gormley, a Leatherman is next best to essential kit to have near to hand if not on your belt. It is seldom when I don’t have one on my belt, that’s for sure, and days are few when it is not used at least once. Sometimes described as a ‘toolbox on your belt’, perhaps not quite, but it comes pretty close dependent on which model you have.

The SURGE is chunky and robust and well-suited to those that will make frequent and probably heavy use of this versatile tool. The Leatherman I have on my belt most of the time is the WINGMAN, as much because I really like the sprung pliers, but it is also reasonably light and compact. This said it is perhaps a bit of a lightweight for those tougher jobs and I am guilty of overdoing it sometimes. The SURGE is probably a rather better one for most of my days.

To help cope with the higher level of stress likely on the hands, the SURGE has very nicely rounded handles; so much kinder. The pliers are robust, reinforced and have the replaceable wirecutter blades. For me, the SURGE has all the essential items on a multi-tool. Notably it has an interchangeable ‘blade holder’ with supplied saw (as always, this is very good) and a double-sided file. The blade not in use can be kept on standby in the (supplied) belt pouch. There are two main blades on the SURGE , serrated and plain pointed, which can be opened single-handed and locked in when the tool is open for other duties. There are also chunky and very good scissors. All tools lock out when in use with sprung levers to release them to fold away.

Another great tool from the house of Leatherman and one, excluding loss or excessive abuse, which will be with you and ready for duty for many many years.