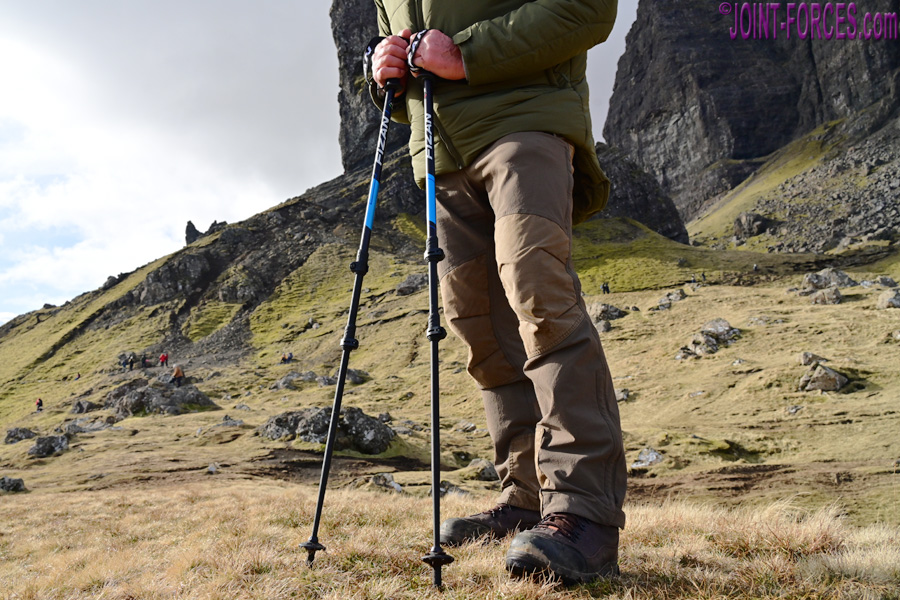 These Fizan Voyager trekking poles have worked hard over the past few weeks during our extended walking and trekking trip in Scotland, writes Mike Gormley.

Okay, so I am not exactly in my first youth, but I have been using trekking poles for many years now and Fizan have been producing poles for even longer than I have been on this planet; the company was founded in 1947, in the town of Bassano del Grappa in Northern Italy.

Trekking Poles are definitely not just for older people. I have grown to realise that not only do they help to distribute the load more equally around your body when it’s working hard but they make things just so much safer when the going underfoot is tricky. Because the poles transfer a lot of load to your arms and onto your shoulders, they reduce the load on your knees and back and hips which so often are problem areas for those with hard worked bodies. You will notice this as your arms and shoulders will ache a bit after a busy day on the hills, but hopefully your back and knees will not.

As well as this, using poles adds power to your climbs and safe braking on your descents. Some, I know, take a bit of time to get used to walking with poles but as you do get accustomed they become an extension to your arms and wrists. It becomes a second sense to place each pole where needed as you move through the varying conditions. I even find I use them to steer myself. If, as I tend to do quite often, you walk in areas of soft bogland and you cross streams often, poles are invaluable. Indeed if you are walking with a purpose, poles will add speed and rhythm.

It was interesting just after Christmas we were in Cornwall for a few days to walk on the SW Coast path. One day we found ourselves being passed by a number of endurance athletes on a non-stop 100 miler around the Lands End peninsula. It was most noticeable how many were using poles or at least had them folded and on their packs. Clearly the ones they use are the super light and packable type and Fizan have in fact such a pole, which they claim to be the lightest four-part trekking pole in the World at just 169 grammes each.

The Fizan Voyagers I have are three-part lever-lock poles that weigh in at 262 grammes each. This said, I reckon they give you a good feeling of confidence when in difficult terrain and really leaning on them; somehow that bit of extra weight seems also to make them ‘place’ a bit more securely. Many poles, as do some of the Fizan range, have an internal twist locking system. These are fine and generally work well but I have found over the years of pole use that you need to give them a tweak every now and again to make sure they are tight enough to withstand your weight when the load goes on; especially important after an hour or two and if going downhill so as to avoid that ‘sinking’ feeling! I have to say I have found the external locks of the Voyager poles are a bit better in this regard. Certainly they add a bit of weight, and they are not so ‘sleek’ to look at, but as for the Fizan Lever Lock system, it is easily adjusted and can be turned up tight if you are using the poles hard.

On our trip to Scotland in March we hoped for, and got, some snow. We went prepared and so I had the chance to use the Voyagers as ski poles as well; not the first time I have used walking poles for this. I find them so much more convenient when on lifts and when moving around the ski area and not actually skiing. You can even fold them down and put them in or on your day pack. Most walking poles, as these do, come with or can be fitted with snow baskets if you are operating in deeper soft snow.

So, as you see from this, I have been a ‘pole convert’ for many years and will, I feel sure, be putting more miles on these Fizan Voyagers in the near future.